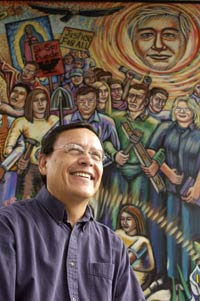 Jose Zapata Calderon was, until his recent retirement, a Professor in Sociology and Chicano Studies at Pitzer College in Claremont. He is married to Marilyn Calderon who was once a staffer for Congresswoman Judy Chu.

As the son of immigrant farm workers from Mexico, he has had a long history of connecting his academic work with community organizing, student-based service learning, participatory action research, critical pedagogy, and multi-ethnic coalition building.

One of his first jobs after graduating from the University of Colorado in the early ’70s was with the Colorado Migrant Head Start program. Calderón also visited the National Headquarters of the United Farmer Workers of America in Delano, California.

In Greeley in the 1970s, Calderon started the Al Frente de Lucha (meaning in the forefront of the struggle), which worked on the UFW boycott of lettuce and grapes. He took California students to work with the UFW and has also worked with the Movimiento Estudiantil Chicano de Aztlan or MEChA, the Marxist “let’s give the Southwest back to Mexico” student organization. 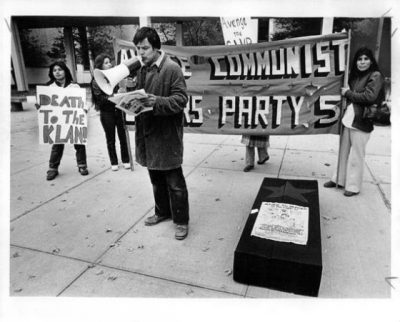 By 1979, Jose Calderon was a member of the pro-North Korea Communist Workers Party in Colorado.

Calderon was protesting the killings of five Communist Workers Party colleagues in North Carolina by the Ku Klux Klan. Despite tight security, Calderon got into the room on an official guest credential.

By the early 1980s, Calderon’s radical friend Judy Chu and husband Mike Eng had settled in Monterey Park, California, which was experiencing an influx of immigrants from China, Taiwan and Hong Kong, “sparking a backlash among some longtime residents who sought a ban on Chinese-language storefront signs.” When a divided City Council voted in 1986 to support a resolution endorsing, among other things, English as the nation’s official language, Chu, by then on the school board, and Eng helped form the Coalition for Harmony in Monterey Park. 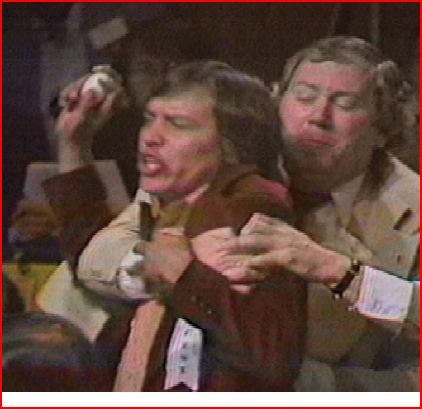 “Judy and Mike were always trying to find ways to bring people together,” said Jose Calderon, another member of CHAMP who is now an associate professor at Pitzer College in Claremont. They started “harmony days” to celebrate the city’s various cultures and they led a petition drive that moved the council to rescind its divisive resolution.

Calderon wasn’t done protesting. In 2011, in a show of opposition to Pomona College’s decision to terminate 17 employees who could not verify their employment documentation before a December 1, 2011, 5 p.m. deadline, 15 supporters of the terminated employees were arrested for refusing to move from the middle of a local intersection. The arrests were part of a large protest that drew more than 100 students, workers, professors, union organizers and Claremont residents.

CPD officers arrested these 15 protesters, a group that included current 5C students as well as alumni and Pitzer College professor Jose Calderon, after they ignored repeated commands to disperse. As they were being handcuffed, these protesters called the names of fired workers and denounced what they described as an unjust decision by the Pomona administration, while a crowd of supporters chanted: “Sí, se puede” and “This is what democracy looks like” from the sidewalk. 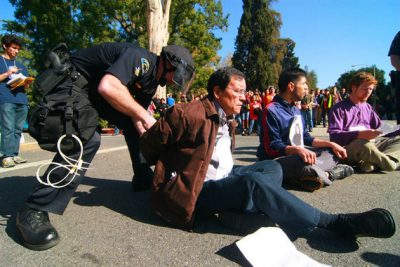 In addition to the support of organizations like the American Civil Liberties Union and the Mexican American Legal Defense and Education Fund, Pomona’s terminated workers have received a message of support from Judy Chu, a Southern California Democrat in the House of Representatives. Bryan Urias, a member of Chu’s staff, attended a protest on behalf of the congresswoman, who “may soon become Claremont’s representative because of citizen-led redistricting.”

“She wanted me to be here to let all of you know, to let the workers know, to let Pomona College know, that she is watching what is going on and she is disgusted with the process that happened here,” Urias said.

Urias added that Chu had personally called President Oxtoby to ask him to reconsider his decision to terminate employees who could not update their documentation by Dec. 1. He also said that Chu’s office intended to help the terminated workers who wanted to fix their documentation and get re-hired by Pomona.

In 2012, Jose Calderon was a delegate to the Democratic National Convention.