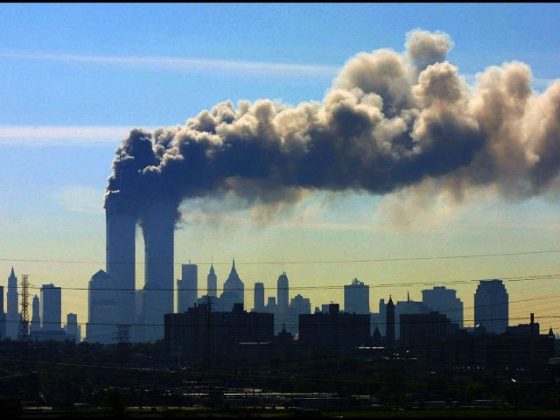 It sucks to have been right all these years. I was in Phoenix when 9/11 happened and I will never forget weeping as I saw the towers come down while almost 3,000 Americans perished that day. Now, in the cold comfort of knowing I was right when it happened, Iranian officials have now admitted to facilitating the 9/11 terrorist attacks on that bright, sunny Tuesday morning in September, 2001. They secretly aided the al Qaeda operatives who eventually went on to fly commercial airliners into the Twin Towers in New York City, according to new remarks from a senior Iranian official. This is a poke the American badger moment because we pulled out of the Iranian deal and in the mullahs’ arrogance, they are admitting the murderous truth. Why? Because war is coming between our nations and they don’t care anymore.

According to the Washington Free Beacon, Mohammad-Javad Larijani, an international affairs assistant in Iran’s judiciary, disclosed in Farsi-language remarks broadcast on Iran’s state-controlled television that Iranian intelligence officials secretly helped provide the al Qaeda attackers with passage and gave them refuge in the Islamic Republic, according to an English translation published by Al Arabiya. “Our government agreed not to stamp the passports of some of them because they were on transit flights for two hours, and they were resuming their flights without having their passports stamped. However their movements were under the complete supervision of the Iranian intelligence,” Larijani was quoted as saying. You do get that this admission is an act of war, right? I’m sure President Trump does, or at least he should. You can bet that John Bolton does.

The remarks represent the first time senior Iranian officials have publicly admitted to aiding al Qaeda and playing a direct role in facilitating the 9/11 attacks. The U.S. has long suspected and accused Iran of being part of the attacks. We have fined the Islamic Republic billions over it. That does not even come close to justice here. And do I need to remind Americans that Barack Obama and John Kerry gave billions to the Iranians and got nothing in return for it? They never meant to stop their nuke program or their terrorism… that money funded both and those two will never get the blood off their hands over it.

Larijani admitted that Iranian officials did not stamp the passports of the al Qaeda militants in order to obfuscate their movements and prevent detection by foreign governments. Al Qaeda operatives were also given safe refuge in Iran. I have said from the very beginning that was the case. I have also said we should have hit Iran rather than Iraq first. If we had, the world would be a lot safer today. “The Americans took this as evidence of Iran’s cooperation with al-Qaeda and viewed the passage of an airplane through Iran’s airspace, which had one of the pilots who carried out the attacks and a Hezbollah military leader sitting [next to] him on board, as evidence of direct cooperation with al Qaeda through the Lebanese Hezbollah,” Larijani was quoted as saying in the May 30 interview, which is gaining traction on social media.

Despite that, Larijani, who is the secretary of the judiciary’s so-called High Council for Human Rights, which is accused by international human rights organizations of violations and cover-ups, in Iran, confirmed that al-Qaeda members were in permanent contact with Iran’s intelligence ministry and that they used Iran in their flights to Afghanistan and other countries.

Khalid Sheikh Mohammed, the architect of the 9/11 terror attack, previously alleged several highjackers transited through the Islamic Republic to Afghanistan because Saudi passports were rarely stamped.

These remarks could possibly serve as further confirmation of the 9/11 Commission’s findings on Iran’s involvement in the attacks.

According to the Washington Free Beacon, who broke the story, the U.S. government has not formally commented on the interview, but did highlight it in an official tweet from the State Department’s Arabic-only Twitter page. The leaders in Iran are consummate liars, but this has the feel of bitter truth. The question is, does Iran feel lucky with President Trump at the helm and Mattis leading the military? And will we at long last cut the head off the Iranian snake and be done with them? Boy, I hope so and soon.

WATCH: In an interview with the Iranian state TV, #Larijani narrated the details of the regime’s relations with al-#Qaeda and how the country's intelligence supervised the passage and relocation of its members in #Iran.https://t.co/fHfzuck4hT pic.twitter.com/zm2DInWl9h