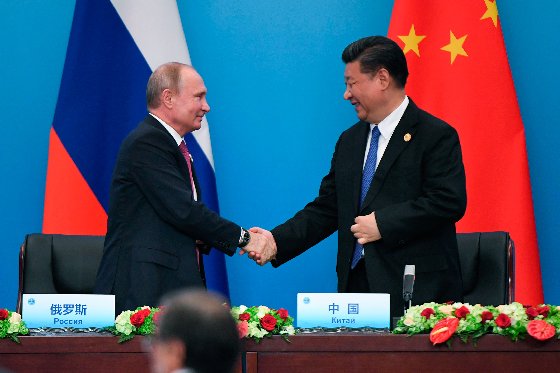 As President Trump was contentiously meeting with world leaders at the G-7 summit, Russia and China were forming their own alliance and expanding the Eastern bloc. This is what the world should be watching as it portends very bad things for the rest of the planet. China’s Xi Jinping and Russia’s Vladimir Putin are joining forces and that has implications for the Iran deal and the North Korean negotiations.

On Sunday, Putin and Xi raised a glass to the expansion of the Shanghai Cooperation Organization, an eight-member bloc designed to coordinate security policies across Asia. They are the controlling powers in what I call the New Axis of Evil: Russia, China, Iran and North Korea. The Shanghai Cooperation Organization welcomed their newest members, India and Pakistan, into the fold. The presidents of both Iran and Mongolia vowed to increase cooperation on energy and agriculture and create more favorable conditions on trade and investment.

As Trudeau was betraying President Trump over tariffs and not only a war of words, but a trade war blossomed on our side of the globe, Xi was giving Putin China’s first friendship medal and sealing a devil’s pact that I suspect we will live to regret. He called Putin his best friend. “President Putin is the leader of a great country who is influential around the world,” Xi said. “He is my best, most intimate friend.” Communist dictators of a feather.

Xi gave a measured speech criticizing new forms of “unilateralism” and “protectionism.” That is directly aimed at the United States and President Trump. “We oppose the practice of sacrificing other countries’ security for their own absolute security,” Xi told a gathering of the SCO’s heads of state in the Chinese port of Qingdao. “We need to reject selfish, short-sighted and closed policies, uphold the rules of the World Trade Organization, support the multilateral trading system and build an open world economy.” 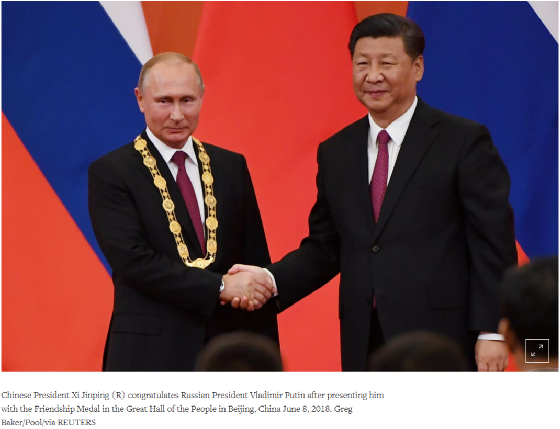 Xi and China have their sights set on being the global leader in finance, trade and economics… and militarily. I fear the negotiations with North Korea could be an ordered distraction by Xi so they can finish setting up their military in the South China Sea. Kim was flown on a Chinese jet to Singapore and I heard they were possibly accompanied by Chinese fighter jets.

China’s propgandic state-run media mocked the United States and the G-7 as being feudal with each other, while the proceedings at the China- and Russian-led bloc were orderly and civil. The English-language Twitter account of the Communist Party’s People’s Daily newspaper posted photos of a tense scene in La Malbaie, Quebec and another of Xi and Putin smiling, with the caption, “G7 vs SCO: two meetings on the same day.” Gee, the communists are making fun of us again.

However, there is a problem with the comparison. Many won’t see it because of the fight over tariffs, but the G-7’s focus is on international security, while the SCO focuses on trade and economic cooperation. The Eastern bloc, which also includes Kazakhstan, Kyrgyzstan, Tajikistan and Uzbekistan, has rallied around opposition of the “three evils” of terrorism, separatism and religious extremism. But things are never what they seem in geopolitics.

China wants to use the SCO to forward its Silk Belt and Road Initiative. Its a vast infrastructure-building program that runs through Russia’s strategic backyard. The addition of South Asian rivals India and Pakistan have also raised questions about the group’s long-term cohesiveness. Tensions are high in the group and it’s not hard to imagine that the two big boys… China and Russia… may at some point put their collective communist foot down to reign everyone in.

Per Bloomberg, Pang Zhongying, who is a senior fellow at Pangoal, a Beijing-based research institution, said the SCO faced the same underlying tensions as the G-7 as governments favor unilateral actions over collective ones. “The golden era of multilateralism is over, facing a crisis not only in the G-7, but also in the SCO,” Pang said. “Even though China’s state-owned media touted the so-called rich fruits of the SCO, only a few tangible achievements were in fact generated from this summit.”

The SCO is united in upholding the wretched Iranian nuclear deal, while the G-7 is totally at odds with one another over it. President Trump has withdrawn from the agreement and Americans overwhelmingly support him in the move. Iranian President Hassan Rouhani, whose country has observer status at the SCO, attended the summit, making his first foreign trip since the U.S.’ decision.

Watch the political lines being drawn here. These are alliances that will be held when and if war comes. And right now the Western alliance can’t agree on anything at all. The communists don’t have that problem… they’ll just use force to get their way and it will be brutal.