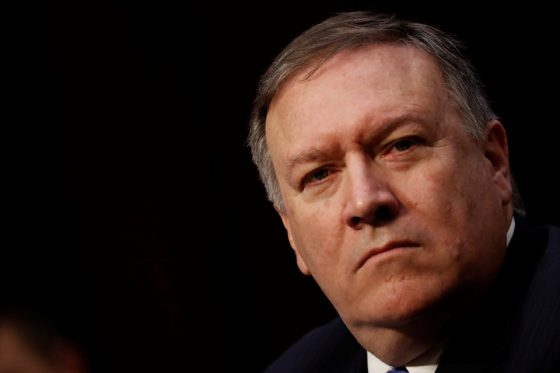 Secretary of State Mike Pompeo has had it with leakers in the State Department and he’s officially going on the hunt to flush them out and take them down. It’s about damn time someone did this. Frankly, if it were me, I’d gut the entire State Department and do a reboot with tough background checks and interviews. That’s probably the only way to ensure that you get rid of the traitors in our midst. Anyone who was an Obama acolyte should be already gone.

Recent media reports show that more classified and unclassified information is leaking out of the State Department and Pompeo is ticked, as he should be. Pompeo has his senior aides that he trusts researching who is up to no good under his command. A State Department spokeswoman, Heather Nauert, just recently held a public affairs meeting to go over the leaks. This came about after an article broke at the Associated Press reporting that Brett McGurk, who was a Special Presidential Envoy appointed under Obama, would remain on the job for another six months. That’s not acceptable and bears looking into. “There were a couple of articles that pissed off Pompeo,” a source familiar with the meeting told Axios. “One was an article about McGurk. Another about slow-rolling Palestinian funding.”

The investigation kicked off with State Department employees having their phones examined for leaking phone calls and texts. I would wager their email was also gone over as well. Remember, Pompeo was with the CIA and if anyone can ferret out leakers, it would be him. When stories started leaking about internal matters, he was shocked and took action almost immediately. Some of the leaks were discovered when reporters attempted to confirm information they received from overseas sources.

Now comes the whining from State Department employees to the media. Some of them ran to Axios and said that Pompeo’s response was heavy-handed and unwarranted. No, it’s the exact right thing to do. It’s what Tillerson should have done from the beginning and it is what John Bolton is also doing currently. He brought in his own people that he trusts to solve the leaking problem on his end. Pompeo is no fool and he won’t stand for this continuous leakage in the State Department. “They’ve gotten diplomatic security involved in the leak investigation — the internal security of the State Department — which is bananas,” a source told Axios. “These are the people who stand outside diplomats’ doors when they sleep overseas.” Sounds to me as though someone is afraid of getting caught and has something to hide.

Nauret made no bones about it with Axios. She said that the unauthorized release of information, whether it’s classified or not, is always a concern. “It can jeopardize ongoing operations and negotiations in which the State Department is involved,” Nauret stated. “Also, Diplomatic Security doesn’t ‘stand outside diplomats’ doors. DS is the security and law enforcement bureau for the entire agency. Their mission is to provide a secure environment for the conduct of U.S. foreign policy.” Well said and she put down that whining very nicely.

Another senior State Department official said that leaks on internal deliberations “have a debilitating effect on our prosecution of foreign policy.” That’s exactly right and they are a national security threat as well. “Most diplomats working on these issues support any effort to ensure our messages are appropriately controlled and coordinated through official channels,” the source said. And those that don’t are about to be purged.

Not only is this the right thing to do, it should be done in every agency and department we have. Others should follow the lead of Pompeo and Bolton. Those that are found leaking information should not only be fired, but prosecuted. Let these people know there are consequences for treacherous acts under President Trump and his administration.