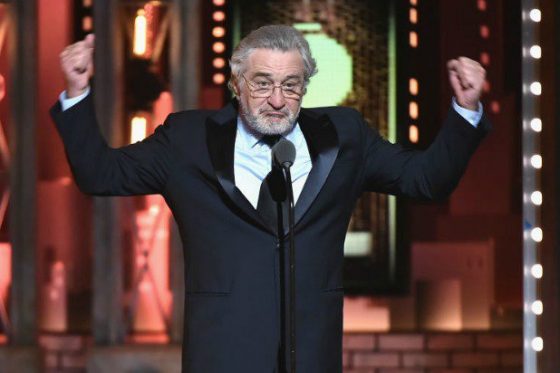 More raging bullcrap from actor Robert De Niro. Yesterday at the Tony Awards, a venue dedicated to honoring excellence in theater, De Niro acted like an infantile brat and threw a temper tantrum onstage. And… he got a standing ovation for it from Hollywood’s finest. This is a man who did not graduate highschool and has the vocabulary of a sewer rat. He stormed onstage and bellowed, “I’m gonna say one thing: “F*** Trump.” They adored him for it.

I can’t think of anything that depicts the widening schism between real Americans and Hollywood more accurately than this tirade by De Niro. Once upon a time, De Niro won an Oscar for “Raging Bull.” Now, he raises his fists like he was some kind of Rocky wannabe and the crowd screams its approval. They came to their feet for a liberal has been hack who is basically a communist at heart.

Egged on by a well-dressed lynch mob, De Niro yelled, “It’s no longer ‘Down with Trump,” it’s “F*** Trump!” That triggered another surge of cheering, clapping and elitist enthusiasm. This certainly isn’t the first time that De Niro has gone after Trump. He’s got a whole list of tributes to the President. He told The Hollywood Reporter, “I feel like I did after 9/11,” after Trump was elected. De Niro refers to the President as an “idiot.” He declared at the annual Hudson River Park Gala “F*** you, Donald Trump. It’s a horror with this mother***er.” At The National Board of Review Annual awards he said, “It’s The Emperor’s New Clothes — the guy is a f***ing fool.” He also said that Trump “lacks any sense of humanity or compassion.”

De Niro again criticized Trump in April during the opening night of the 2018 Tribeca Film Festival. “America’s being run by a madman who wouldn’t recognize the truth if it came inside a bucket of his beloved Colonel Sanders Fried Chicken,” he said. And who can forget SNL’s segment with De Niro playing Robert Mueller. I can and it was not funny.

His Tony Awards scree went viral internationally. This is De Niro’s lame attempt to be relevant long past his prime. Fortunately for Americans, De Niro’s graphic rant was censored out, but Australia and other countries aired him in all his profanity.

The liberal actor went on to introduce Bruce Springsteen’s performance. “Bruce, you can rock the house like nobody else,” said De Niro. “Even more important in these perilous times, you rock the vote. Always fighting for, in your own words, truth, transparency, integrity in government. Boy, do we need that now.” Really? Because Bruce Springsteen is another Marxist celebrity that hearts communism. All of these aging stars are going political to feed their egos. Lame.

Backstage, playwright Tony Kushner praised De Niro for his tirade on stage, saying he agrees with the sentiment expressed by the actor. “Good for him. I mean, it’s Robert De Niro. Who’s gonna argue with him?” he said. Well, me for one and most of the country. Kushner called the Trump presidency “the Hitler mistake” that put a “borderline psychotic narcissist in the White House.” Nice. And they wonder why they have no fans anymore.

I’m sick to death of these Hollywood elitists who hate capitalism, their country, the President and Americans in general. They live in a bubble of make believe and are hooked on their own narcissism and need for adoration, power and wealth. De Niro can get stuffed… he’s in love with his own character. Actually, I didn’t know that anyone even watched the Tony Awards anymore or listened to De Niro for that matter. I just have one thing to say, “Screw De Niro and most of Hollywood!”

2 thoughts on “De Niro Gets Standing Ovation From Celebrities At The Tony Awards After Bellowing “F*** Trump!””