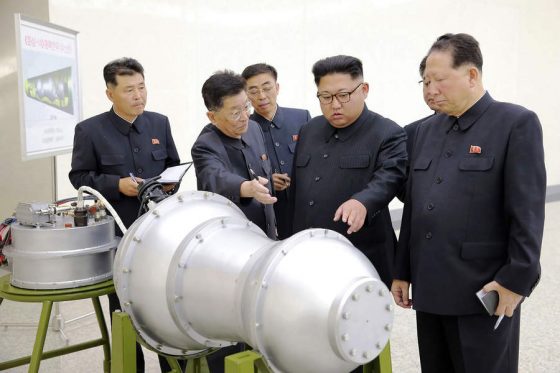 Professionals at Los Alamos and Oak Ridge Laboratories estimate it would take up to ten years to dismantle all programs and operations in North Korea. Further, Tehran, Moscow and Beijing will work hard to delay what they can due to eliminating evidence of their respective involvement for decades in North Korea.

NYT’s: The vast scope of North Korea’s atomic program means ending it would be the most challenging case of nuclear disarmament in history. Here’s what has to be done to achieve — and verify — the removal of the nuclear arms, the dismantlement of the atomic complex and the elimination of the North’s other weapons of mass destruction.

President Trump says he is meeting Kim Jong-un in Singapore because the North Korean leader has signaled a willingness to “denuclearize.’’

But that word means very different things in Pyongyang and Washington, and in recent weeks Mr. Trump has appeared to back away from his earlier insistence on a rapid dismantlement of all things nuclear — weapons and production facilities — before the North receives any sanctions relief.

Whether it happens quickly or slowly, the task of “complete, verifiable, irreversible denuclearization’’ — the phrase that Secretary of State Mike Pompeo keeps repeating — will be enormous. Since 1992, the country has repeatedly vowed never to test, manufacture, produce, store or deploy nuclear arms. It has broken all those promises and built a sprawling nuclear complex.

North Korea has 141 sites devoted to the production and use of weapons of mass destruction, according to a 2014 Rand Corporation report. Just one of them — Yongbyon, the nation’s main atomic complex — covers more than three square miles. Recently, the Institute for Science and International Security, a private group in Washington, inspected satellite images of Yongbyon and counted 663 buildings.

North Korea is the size of Pennsylvania. The disarmament challenge is made worse by uncertainty about how many nuclear weapons the North possesses — estimates range from 20 to 60 — and whether tunnels deep inside the North’s mountains hide plants and mobile missiles.

The process of unwinding more than 50 years of North Korean open and covert developments, therefore, would need to start with the North’s declaration of all its facilities and weapons, which intelligence agencies would then compare with their own lists and information.

Nuclear experts like David A. Kay, who led the largely futile American hunt for weapons of mass destruction in Iraq, argue that the North Korean arms complex is too large for outsiders to dismantle. The best approach, he contends, is for Western inspectors to monitor North Korean disarmament. The time estimates range from a few years to a decade and a half — long after Mr. Trump leaves office.

The magnitude of the North Korean challenge becomes clearer when compared with past efforts to disarm other nations. For instance, Libya’s nuclear program was so undeveloped that the centrifuges it turned over had never been unpacked from their original shipping crates. Infrastructure in Syria, Iraq, Iran and South Africa was much smaller. Even so, Israel saw the stakes as so high that it bombed an Iraqi reactor in 1981, and a Syrian reactor in 2007.

Here’s what is involved in each of the major disarmament steps:

Under the eye of a declared nuclear state — like the United States, China or Russia — take apart every nuclear weapon in the North Korean arsenal and safely ship the components out of the country.

North Korea released a photograph of the country’s leader, Kim Jong-un, center, inspecting what it said was a hydrogen bomb that could be fitted atop a long-range missile. Korean Central News Agency

John R. Bolton, Mr. Trump’s hawkish national security adviser, has argued that before any sanctions are lifted, the North should deliver all its nuclear arms to the United States, shipping them to the Oak Ridge National Laboratory in Tennessee, where inspectors sent Libya’s uranium gear.

It’s almost unimaginable that the North would simply ship out its weapons — or that the rest of the world would be convinced that it had turned over all of them.

Siegfried S. Hecker, a Stanford professor who formerly headed the Los Alamos weapons laboratory in New Mexico, argues that the only safe way to dismantle the North’s nuclear arsenal is to put the job, under inspection, in the hands of the same North Korean engineers who built the weapons. Otherwise, he said, outsiders unfamiliar with the intricacies might accidently detonate the nuclear arms.

Dismantle the plants where centrifuges spin at supersonic speeds to make fuel for nuclear reactors and atom bombs.

Factories holding hundreds of centrifuges spin gaseous uranium until it is enriched in a rare form of the element that can fuel reactors — or, with more enrichment, nuclear arms.

It’s easy to shut down such plants and dismantle them. The problem is that they’re relatively simple to hide underground. North Korea has shown off one such plant, at Yongbyon, but intelligence agencies say there must be others. The 2014 Rand report put the number of enrichment plants at five.

Because uranium can be used to fuel reactors that make electricity, North Korea is almost certain to argue it needs to keep some enrichment plants open for peaceful purposes. That poses a dilemma for the Trump administration.

In the case of Iran, it has insisted that all such plants be shut down permanently. After arguing that the Obama administration made a “terrible deal” by allowing modest enrichment to continue in Iran, it is hard to imagine how Mr. Trump could insist on less than a total shutdown in North Korea.

Inside a reactor, some of the uranium in the fuel rods is turned into plutonium, which makes a very attractive bomb fuel. Pound for pound, plutonium produces far more powerful nuclear blasts than does uranium. In 1986, at Yongbyon, North Korea began operating a five-megawatt reactor, which analysts say produced the plutonium fuel for the nation’s first atom bombs. Today, the North is commissioning a second reactor that is much larger. 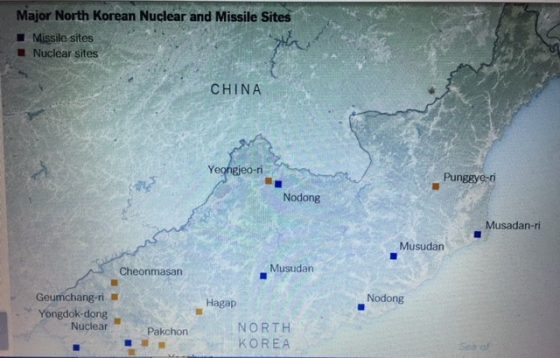 Jan. 17, 2018 image from DigitalGlobe via Institute for Science and International Security

Reactors are hard to hide: They generate vast amounts of heat, making them extremely easy to identify by satellite.

But reactors that produce large amounts of electricity — such as the new one being readied in North Korea — pose a dilemma, because the North can legitimately argue it needs electric power. It seems likely that the Trump administration will come down hard on the North’s new reactor, but might ultimately permit its operation if the North agrees for the bomb-usable waste products to be shipped out of the country.

Confirm that the North’s recent, staged explosions actually destroyed the deep tunnels and infrastructure, or take additional steps to make the complex unusable.

Atom and hydrogen bombs need repeated testing to check their performance. Since 2006, the North has detonated nuclear devices at least six times in tunnels dug deep inside Mount Mantap, a mile-high peak in the North’s mountainous wilds.

Last month, the North blew up test-tunnel portals at Mount Mantap as a conciliatory gesture before the planned denuclearization talks. Experts say the thick clouds of rising smoke and debris, while impressive for television cameras, leave open the question of whether the damage is irreversible. Presumably, the North could also dig new test sites beneath other mountains. The Trump administration has called for an end to all explosive testing.

At the heart of a missile warhead, an exploding atom bomb can act as a superhot match that ignites thermonuclear fuel, also known as hydrogen fuel. The resulting blast can be 1,000 times more powerful than the Hiroshima bomb. North Korea is suspected of having at least two sites for different aspects of H-bomb fuel production — one at Yongbyon, and one near Hamhung, on the country’s east coast.

The exotic fuels also have civilian uses for the manufacture of glow-in-the-dark lighting, exit signs and runway lights. The Trump administration stance is unclear. Atomic experts say the military threat can be reduced by shuttering large plants, building smaller factories and carefully regulating their products.

In a mountainous country, give international inspectors the freedom to roam and inspect anywhere — with automated monitoring of key sites.

Under past nuclear agreements, inspectors from the International Atomic Energy Agency have lived in North Korea, but their movements were limited to small parts of the giant Yongbyon facility, where the nation’s nuclear reactors are located. For inspections to be effective, they must cover the whole country — including military facilities. (One of Mr. Trump’s complaints about the Iran agreement was that inspectors were inhibited from going anywhere.)

But inspecting all of North Korea — land of underground tunnels — would be an enormous job. American intelligence agencies have spent billions of dollars watching missiles move, mapping likely facilities, and using spy satellites and cyber reconnaissance to track the arms. But they have surely made mistakes, and missed some facilities. The problem gets larger if the inspectors are seeking out underground bunkers that hide missiles for quick strikes.

Eliminate anthrax and other deadly biological weapons, under constant inspection.

Biological weapons can be more destructive than nuclear arms. A single gallon of concentrated anthrax is said to have enough spores to kill every person on Earth. The challenge is how to deliver the living weapons. The anthrax attacks of 2001 relied on letters, killing five people, sickening 17 others and frightening the nation.

North Korea is suspected of having a large complex for making germ weapons. The problem is learning its true dimensions, and verifying its dismantlement. While nuclear and missile tests advertise their developmental strides openly, the production and testing of deadly pathogens can be done behind closed doors.

Moreover, experts argue that the gear for producing germ weapons is often identical or similar to that of medicine and agriculture, making it extremely hard if not impossible for outsiders to verify that germ-weapon work has ended. The Trump administration’s stance is unknown other than it wants the North to end all work on biological weapons.

Eliminate sarin, VX and other lethal agents the North has used on enemies.

Last year, the deadly nerve agent VX was used to assassinate Kim Jong-nam, the estranged half brother of the North’s leader. The killing cast light on the North’s long pursuit of chemical weapons. Although the North denies having any, experts rank the nation as among the world’s top possessors, saying it harbors thousands of tons of the banned armaments.

The Trump administration’s negotiating list with the North includes chemical disarmament. Syria is a reminder of the difficulty. President Barack Obama cut a deal with Damascus to destroy its chemical arsenal. This year, the United States accused the Syrian government of using the banned weapons at least 50 times since the civil war began, topping previous official estimates. The attacks have maimed and killed hundreds of Syrians, including many children.

Eliminate the long-range threat to the U.S. and mid-range missile threat to Japan and South Korea.

In November, the North tested a greatly improved intercontinental ballistic missile that flew farther than any other — far enough to threaten all of the United States. It was a remarkable achievement that brought the current, long-escalating crisis to a head. While experts say the North still needs to do more testing to ensure that the missile’s warheads can survive fiery re-entry, the test flight showed that Mr. Kim had come remarkably close to perfecting a weapon that could threaten American cities.

Curbing the North’s missile program is high on the Trump administration’s negotiation list. A simple precaution is to limit the range of test flights — a fairly easily thing to monitor. A key question is whether arms negotiators will also try to redirect the North’s large corps of rocket designers and engineers into peaceful activities, such as making and lofting civilian satellites.