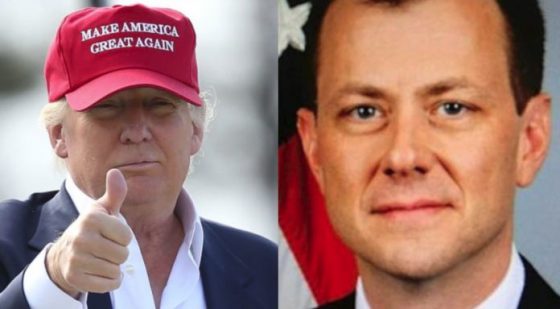 Parts of the Department of Justice Inspector General’s report are coming to light. It is set to be released today and it has several surprises in it. The one that most caught my attention has to do with FBI agent Peter Strzok. The report overall found no political bias in the actions of the FBI during the Hillary Clinton email scandal. So how do they explain the text revealed in the report that FBI agent Peter Strzok sent to his lover, former FBI agent Lisa Page? Here’s the damning exchange, circa August 2016:

Page: [Trump’s] not ever going to become president, right? Right?!

We’ve already seen texts from these two that hinted at an attempted coup and now this. What exactly did he mean by, “We’ll stop it?” Strzok was not fired over the texts. He was transferred to human resources and still has a job. Page was allowed to resign. Why? How can a key, high-ranking FBI agent involved in both the Hillary Clinton investigation and the Russian election interference investigation text this and not only be fired, but prosecuted as well? WTH is going on? And the fact that the inspector general found that there was no political bias was present in the actions of the FBI is patently insane and untrue.

We still don’t have all the facts of how badly the FBI has bungled the Russian investigation and it’s not covered in the IG’s report. We know they screwed up the Clinton deal and then deliberately let Hillary walk. These text messages between Strzok and Page are key evidence and they go to show just how biased the FBI was against Trump and to what lengths they would go to in their mission to keep him from the presidency. This also gives serious weight to the contention that when Strzok spoke of the Russia investigation as an “insurance policy” against Trump’s presidency, he was serious. I have never doubted he was… he meant every word he texted.

This latest text as Ben Shapiro put it “is an explicit admission that high-ranking actors in the FBI saw preventing Trump’s presidency as paramount. Barring some highly damning information demonstrating the full legitimacy of the Russia investigation, this text from Strzok to Page could and should completely destroy whatever faith the American still had in the legitimacy of the Russia investigation.” Mine was destroyed a long, long time ago. By all appearances, this IG report is another attempt to let the FBI skate here and not hold anyone accountable. I am simply disgusted by it.

This text is very likely to fuel claims from the White House that the bureau was working against Trump and who can blame them on that count? They were and let’s call it what it was… an attempted coup and the person behind all of it was Barack Obama. He was read in on what all of these people were doing and he was calling the shots. I don’t think we are capable of justice anymore or going after those who break the law on either side of the political aisle. McCabe was in on it too. Obama should have to answer for his crimes, just as Clinton should.

“In Louisiana, we call that bias, we don’t call that objective,” Sen. John Kennedy (R-LA) said on Fox News’ “Outnumbered Overtime” on Thursday. Boy, is he right. House Oversight and Government Reform Committee Chairman Trey Gowdy (R-SC) said in a statement the report shows “an alarming and destructive level of animus displayed by top officials at the FBI.” And yet, Horowitz seems to sugarcoat the political intent here. “Peter Strzok’s manifest bias trending toward animus casts a pall on this investigation… His bias impacted his decision making and he assigned to himself the role of stopping the Trump campaign or ending a Trump Presidency,” Gowdy said. “This is not the FBI I know.” But it is the FBI that exists today.

Inspector General Michael Horowitz, a former federal prosecutor appointed by President Barack Obama, prepared the report. Supporters from both parties regard him as apolitical. His most significant report before this was the 2012 study of the botched Obama-era gun operation known as Fast and Furious. And nothing ever came of that either.

A congressional source told Fox News that Page’s text about Trump “not ever going to become president” was produced to Congress, but Strzok’s response that “we’ll stop it” was not. That figures, because if it had, there would have been a massive amount of outrage and this might have turned out very differently.

According to the Associated Press, the Justice Department’s watchdog also faults former FBI Director James Comey for breaking with established protocol in his handling of the Clinton email investigation, but it says his decisions before the 2016 elections were not driven by political bias. Oh, bull crap. The report from the inspector general also criticizes Comey for not keeping his superiors at the Justice Department, including former Attorney General Loretta Lynch, properly informed about his handling of the investigation. But he kept Obama informed… bet on it.

Well, cry me a freaking river. None of this goes anywhere near far enough and this is not only going to alienate Americans, it’s going to really, really tick them off. That includes me. This isn’t justice… it’s a political sham. Just more of the same from the swamp.