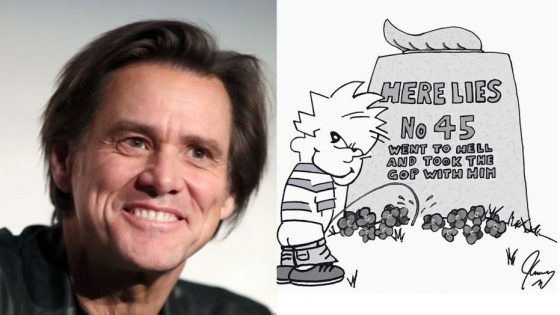 I used to love Jim Carrey’s movies. Now, you couldn’t pay me to watch one. He has become a washed up, bitter, vile, vindictive has been. Carrey now fancies himself an artist. You’ll see some of his work below. I didn’t post others that are obscene. Jim Carrey has the IQ of a doormat these days. Too much booze and too many drugs… now he marinates in leftist propaganda and pats himself on the back for being oh-so-clever… not.

Carrey tweeted a picture on Thursday of Calvin, from the hit comic strip Calvin & Hobbes, urinating on President Trump’s grave. Classy. The tweet says, “Oh how I urine for this all to be over!” The tombstone reads: “Here Lies No 45 Went To Hell And Took The GOP With Him.” It is meant to be an insulting birthday tweet for the Commander-in-Chief. Mission accomplished.

Carrey’s Twitter account has turned into an anti-Trump platform where he vomits his hatred at will. It’s disgusting. This crude image is just the latest in the 56 year-old’s viral political paintings. The left can’t get enough of them. On Tuesday, Carrey posted a painting that took aim at Trump and North Korean dictator Kim Jong-Un amid their historic summit in Singapore. In the drawing, Trump, who is wearing a blue suit and red tie, appears to be holding a microphone for a speaking Kim, who seems to be dressed up as a missile. The North Korean’s outfit reads, “I STARVED MY PEOPLE TO MAKE THIS MISSILE.” Kim also appears to be giving the hand symbol for peace while raising up a sign saying, “LITTLE ROCKET MAN.”

Along with that particular tweet, Carrey also wrote this caption: “Let’s Make A Deal: You’ll be a real world leader. I’ll sway the midterm elections. And together we will save the world from the bloodthirsty Canadians.” Carrey is Canadian of course and basically a communist.

Oh how I urine for this all to be over! pic.twitter.com/uzLULtNPLE

In March, the actor posted a drawing depicting Trump as the Wicked Witch of the West. First Lady Melania Trump, as well as White House Press Secretary Sarah Sanders, have also been targeted in Carrey’s images. In early June, the Dumb and Dumber star depicted a “brainwashed” and “mindless” Melania Trump being tortured. In yet another drawing, Carrey depicted Trump’s border policies as being comparable to the Holocaust.

Carrey started drawing and painting six years ago. His last two films have flopped and he has become obsessed with political artwork. Color me severely unimpressed. The contempt that Carrey feels for President Trump is felt for him personally by most of America. Everyone but communists, Hollywood and Democrats… but I repeat myself.

I have seen Carrey viciously attack Trump, Sanders, Hannity and just about everyone else on the right. When his movies stopped selling, he started trafficking in hate. Not a good look for Carey. Perhaps Jim will go to work for the Democrats who say they need help messaging. He excels at hatred as they do. It should be a good Marxist fit. As Twitchy put it, “Between Carrey’s “art” and Robert De Niro saying “f**k Trump, the Dems are a shoo-in (to stay in the political minority).”

Let’s Make A Deal: You’ll be a real world leader. I’ll sway the midterm elections. And together we will save the world from the bloodthirsty Canadians. pic.twitter.com/kHa1w3ye03

NFL — who exploits players for 3yrs then abandons them to a lifetime of pain — sided with a draft-dodging racist who uses fake patriotism to squash peaceful protest. Corporations shld rethink sponsoring moral cowardice before we start asking: whose side is Nationwide really on? pic.twitter.com/ytVSiE4wfX

Don’t worry folks. Melania is fine. They’re probably just reminding her how to play well with others. pic.twitter.com/qwlyNneX0P

1500 innocent children ripped from their mothers’ arms at our border. Lost in Trump’s “system”. Give us your tired, your poor, your huddle masses yearning to breathe free — and we will torture them for wanting a better life. From Shining City to Evil Empire in under 500 days. pic.twitter.com/Qg07vb0aBg

The Democrats are reaching out to Hollywood celebrities for help, please let them hire Jim Carrey as art director. https://t.co/lYWNN6gaZY