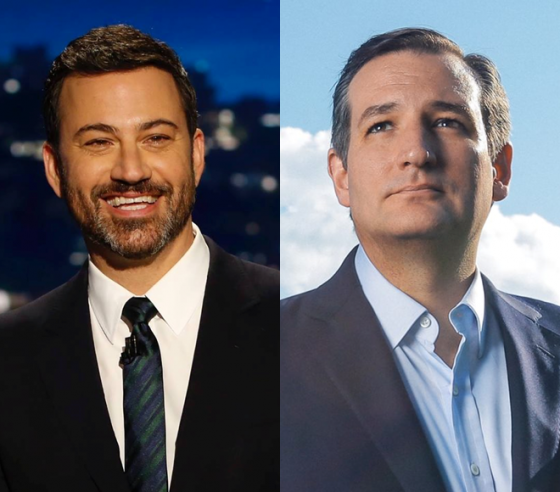 Houston is getting ready to rumble with Senator Ted Cruz and late night socialist loser Jimmy Kimmel. Cruz has released a promo on Twitter that is simply hysterical. A Texas beat-down is coming Kimmel’s way!

Get ready for the showdown of the summer…

You’ve got to admit that was clever. I loved it! Cruz has got game… he’s going to stomp Kimmel.

Am working hard to get ready for the big game on Saturday. @jimmykimmel — are you scared yet? I’m playing better than ever. #unstoppable #KimmelvsCruz pic.twitter.com/XklHueCjpO

If you find yourself in Houston, go watch the match-up. You need tickets though. The game is scheduled for 5 p.m. local time Saturday at Texas Southern University in Houston. The two titans will play to 15 points, with each made basket counting for one point. Tickets are free and attendees are encouraged to donate to the two men’s chosen charities: Generation One and Texas Children’s Hospital.

Looks like most of it is in good fun and Cruz pokes fun at himself as well as Kimmel. “Am working hard to get ready for the big game on Saturday. @jimmykimmel — are you scared yet? I’m playing better than ever,” Cruz tweeted. The tweet was accompanied by a video that showed Cruz missing jump shots and lay-ups, set to the “Chariots of Fire” theme song. But nothing beats the first video showing Kimmel in a bikini… he’s ALL CLASS.

Cruz and Kimmel agreed earlier this month to compete in a charity one-on-one basketball game after the “Jimmy Kimmel Live!” host poked fun at Cruz for attending a Houston Rockets playoff game with a “super cool T-shirt over the polo look.” Cruz shot back on Twitter, calling on Kimmel to “settle this man-to-man.” “[email protected] All right, Big Guy…you talk a good game. You besmirched my support for the @HoustonRockets,” Cruz tweeted. “So let’s settle this man-to-man: one-on-one, hoops (or ‘ring-ball,’ if you prefer). The loser gives $5k to the (non-political) charity of the winner’s choice.” Kimmel accepted the challenge and the Blobfish Basketball Classic was set for June 16 at Texas Southern University.

Kimmel is full of trash talk. Understandable for a guy that has women pretend to have sex with him on the street, sports a bikini and uses his child to shill for Obamacare. Let’s see what he brings to the court since he has no shame. Cruz will win and make him eat his insults. I’m with Cruz all the way! Of course, Kimmel is still calling Cruz names like “blobfish.” A weak mind and form touts pettiness… GO TED!!!

He’s got game! Take a look at Sen. @tedcruz gets pointers from @UHouston great, Lynden Rose. Watch the shoot around live on https://t.co/vBr3pUUO6S pic.twitter.com/ZLjTqlHJeF

2 thoughts on “Ted Cruz Gets Ready To Rumble With Jimmy Kimmel – It’s The Showdown Of The Summer Y’all!”