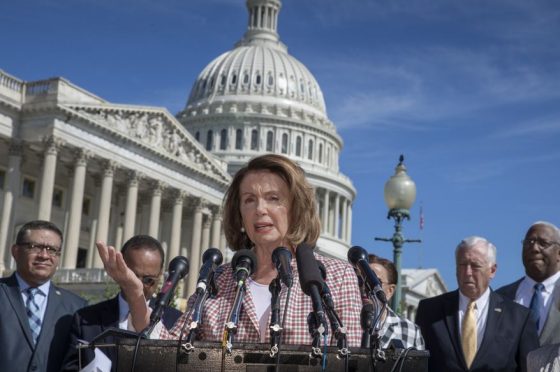 House Minority Leader Nancy Pelosi does not know when to shut it. Not only does she seem addled and not all there, she has the nerve to lecture people of faith on the topic of illegal immigration. This is a Marxist who happily supports the genocide of the unborn, but quotes the Bible when it suits her needs. You want the definition of hypocrite? Look under ‘Nancy Pelosi’. Then she called for an uprising across America.

Pelosi attacked “all people of faith in our country” on Friday over the prosecution of illegal immigrants on the southern border. She was shameless. Here we go again with the new talking point on the left claiming that the evil Republicans are tearing nursing children from their mother’s breasts. It’s simply not true. And the policies they are ranting over were utilized by Barack Obama – he was the one who put poor children in cages like dogs. We don’t do that under this president.

Most of the time, children stay with their parents now. Those that don’t have clean, nice accommodations with soft beds, clean clothes, medical care and hot food. They are taught English and given studies to learn and chores to carry out. Hardly what I would call abuse. Parents who illegally cross into the U.S. are briefly separated from their children for up to three weeks while their case is adjudicated.

Attorney General Jeff Sessions spoke recently and said that respecting the rule of law is a biblical principle and that is true. But it caused a collective meltdown on the left. Faith is like holy water to communist vampires.

The Democrats are forcing the breakup of families at the Border with their horrible and cruel legislative agenda. Any Immigration Bill MUST HAVE full funding for the Wall, end Catch & Release, Visa Lottery and Chain, and go to Merit Based Immigration. Go for it! WIN!

Pelosi went on to accuse the Trump administration, its surrogates and all people of faith of gross hypocrisy for not agreeing with her preferred policy regarding the children of illegal immigrants. “The very hypocrisy of the Attorney General to quote the Bible, the hypocrisy of all people of faith in our country not to clamor for what the administration is doing to end — whether it’s to deprive the dreamers of the respect they deserve or whether its taking babies away from their mothers and fathers,” Pelosi said Friday, the Daily Caller reported.

What set Pelosi off exactly? Well, Sessions addressed law enforcement officials in Indiana on Thursday. He quoted the Apostle Paul who made a “clear and wise command in Romans 13 to obey the laws of the government because God has ordained them for the purpose of order.” There is nothing wrong with that quote and it is directly from the Bible. Pelosi lambasted Sessions for quoting the Bible and chastised people of faith for not calling for a path to citizenship for DACA recipients. She also criticized Sessions for not demanding an end to the separation of children from families of illegal immigrants during the prosecution of adults.

“We are not sending children to jail with their parents,” Sessions said. “Noncitizens who cross our borders unlawfully, between our ports of entry, with children are not an exception. They are the ones who broke the law. They are the ones who endangered their own children on their trek. The United States, on the other hand, goes to extraordinary lengths to protect them while the parents go through a short detention period.” That’s exactly right. Parents and other adult illegal aliens use these children as human shields to get into this country and it is wrong. The adults are the ones breaking the law here.

Pelosi then called the Trump administration hypocrites and urged “right thinking” Republicans to bring an end to what she called the “un-American activities that are being put forth by the President of the United States, by the Republicans in congress, and by this Attorney General.” “For this administration to pose as people of faith and pose as people who care about family and children is of a height of hypocrisy that knows no bounds,” Pelosi said. Wow… the only raving hypocrite I see here is Pelosi and she doesn’t even have enough sense to be ashamed of herself or to fear God might strike her down where she stands. She is a typical lying communist.

President Trump roasted Democrats on Twitter for exploiting policies that existed under former President Obama. “Democrats can fix their forced family breakup at the Border by working with Republicans on new legislation, for a change! This is why we need more Republicans elected in November. Democrats are good at only three things, High Taxes, High Crime and Obstruction. Sad!” Trump tweeted today.

“The Democrats are forcing the breakup of families at the Border with their horrible and cruel legislative agenda,” Trump tweeted on Friday. “Any Immigration Bill MUST HAVE full funding for the Wall, end Catch & Release, Visa Lottery and Chain, and go to Merit Based Immigration. Go for it! WIN!” And that is exactly right. It is the Democrats who are causing all this turmoil. Follow the law and this will all work out, but the Democrats don’t want that. They want open borders and a permanent voter base. Pelosi doesn’t care about illegal immigrant children… she cares about power.

High potency marijuana not only can cause mental illness but is responsible for birth defects, low birth weights for babies, more emergency room visits, violence, and an increasing number of school problems. Cases of “scromiting,” or screaming while vomiting, has been linked to marijuana use. Drug policy expert David G. Evans examines how Obama backer George Soros, main funder of the legalization of drug legalization movement, is in business with Trump son-in-law Jared Kushner, and how they are working with libertarian billionaire marijuana investor Peter Thiel to pass a bill to protect the dope industry from federal anti-drug laws. Signing the bill would be the worst mistake of the Trump presidency. 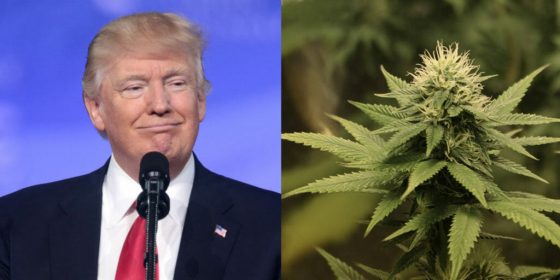 The lunatic Ayatollah Khamenei will not be the recipient of more pallets of cash in the foreseeable future.

Ayatollah Ali Khamenei ranted on his un-verified Twitter account that “[T]he #ZionistRegime will not last,” claiming that it was “founded based on falsehood.” He slammed “a few spineless states” who would support Israel, and singled out the White House for moving the embassy to Jerusalem. The “Zionist Regime,” according to the recipient of pallets of cash from the Obama administration, suffers from “fundamental illegitimacy.”

“Undoubtedly,” rants the Ayatollah, “the Zionist regime will perish in the not-so-far future.”

Here are his tweets:

Zionist Regime’s issue isn’t about diplomatic ties with other states, to be solved if a few spineless states in region established ties with it. It’s about nations; it won’t be solved by White House’s efforts, moving its embassy. It’s about the regime’s fundamental illegitimacy.

The Zionist regime was founded based on falsehood. They have forcefully and by means of coercion, threat and armed forces, expelled a historical nation from their own country. Is it possible to eliminate #Palestine from the historical-geographical memory of the world?!

Like all free countries, people of #Palestine–real Palestinians– should be polled to determine the political system of Palestine; that governing body will decide on future of immigrants in Palestine. There’s no other solution and this leads to elimination of the Zionist regime.

The #ZionistRegime will not last. All historical experiences imply that with absolute certainty. Undoubtedly the Zionist regime will perish in the not-so-far future.

After the 1979 revolution was successful, the Islamists imprisoned and killed the Soviet-backed Tudeh Party communists, who drove the revolution. Once the Islamists were firmly in power, Iran slid backwards into the dark age where it languishes today. The Tudeh Party is just one Marxist organizations who has crept back into Iran and is once again agitating for power amidst unrest in Iran. In a recent statement, they warned that Israel and America may seek to “co-opt” the protest.

“Tudeh however, also warned about the potential for Israel and the United States to co-opt what they declared to be a grassroots struggle against Iran’s theocratic rule. Among the forces in the appeal that Tudeh believes protesters should be wary of, they named ‘the regional reactionaries, the Trump administration, the right-wing government of Netanyahu and the Iranian monarchists.'”

The ongoing and stormy marriage between Islamists and communists is documented in Trevor Loudon’s film, “America Under Siege: Soviet Islam.”

As recently reported at TrevorLoudon.com, it was recently divulged that Iranian intelligence officials “secretly helped provide the [9/11/2001] al Qaeda attackers with passage and gave them refuge in the Islamic Republic.”