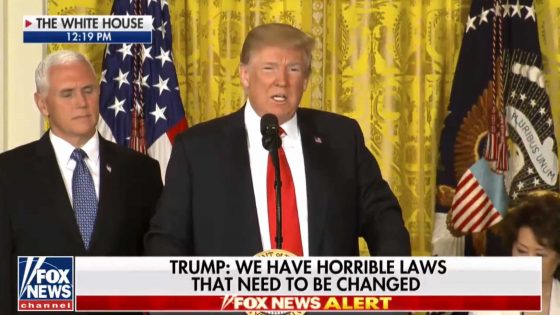 President Trump sounds like he’s had enough of this open border insanity and I don’t blame him in the least. He doubled down on his stance on illegal immigration today. Then he went even further and told Americans that we won’t become Europe regarding migrants and refugees on his watch. Good. “The United States will not be a migrant camp and it will not be a refugee holding facility,” Trump said during a press conference. “It won’t be. You look at what is happening in Europe and other places, we can’t allow it to happen to the United States. Not on my watch.” Thank the heavens for that… it would destroy this country once and for all.

Trump launched into a tweet storm early today over all this. You’ve got Laura Bush saying the temporary separation of illegal immigrant families is “cruel” and “immoral.” She added that it is “eerily reminiscent of the Japanese American internment camps of World War II.” Bull crap and shame on her for saying that. “I live in a border state. I appreciate the need to enforce and protect our international boundaries, but this zero-tolerance policy is cruel. It is immoral. And it breaks my heart,” she writes. Perhaps she should go take an actual look at one of these facilities like Breitbart did before adding more fuel to the political fire here.

“Our government should not be in the business of warehousing children in converted box stores or making plans to place them in tent cities in the desert outside of El Paso,” Laura Bush added. “These images are eerily reminiscent of the Japanese American internment camps of World War II, one of the most shameful episodes in U.S. history.” She also wrote about the “trauma” these children face. “We also know that this treatment inflicts trauma; interned Japanese have been two times as likely to suffer cardiovascular disease or die prematurely than those who were not interned.” Oh, give me a freaking break! None of that is true… these children are in what look like dormitories in clean, comfy beds. They are well fed and taken care of.

.@POTUS: “If the Democrats would sit down instead of obstructing, we could have something done very quickly…What's happening is so sad." pic.twitter.com/GzZID6OCjo

Trump also reminded his critics that criminals are using these children as human shields. “Children are being used by some of the worst criminals on earth as a means to enter our country,” Trump wrote on Twitter. He also covered the horrific crime rate over the border. “Has anyone been looking at the Crime taking place south of the border,” he wrote. “It is historic, with some countries the most dangerous places in the world. Not going to happen in the U.S.” Then Trump laid the blame where it belongs… with the Democrats. “CHANGE THE LAWS!” he wrote in all-caps. “It is the Democrats fault for being weak and ineffective with Boarder Security and Crime. Tell them to start thinking about the people devastated by Crime coming from illegal immigration.”

“We need borders, we need security, we need safety,” Trump said. Yes, we do. We are a sovereign nation and this has to stop, regardless of what the leftist Democrats demand. He admonished Democrats for grandstanding on the issue of immigration instead of working with Republicans to fix the problem. “If the Democrats would sit down instead of obstructing, we could have something done very quickly,” he said. “Good for the children, good for the country, good for the world.” Trump said he’s ready and willing to accept more immigrants, but their acceptance should be based on skill level. He added, however, that the problem with the country’s immigration laws had to be fixed first. “A country without a border is not a country at all. … It starts at the border, and that’s the way it is,” Trump concluded. So very, very true.

Frankly, the Dems that are trying to beat down doors to these facilities where the children are should be arrested. This madness needs to end. It is political subterfuge and we are being manipulated through children. Just stop it already.

Why don’t the Democrats give us the votes to fix the world’s worst immigration laws? Where is the outcry for the killings and crime being caused by gangs and thugs, including MS-13, coming into our country illegally?

The people of Germany are turning against their leadership as migration is rocking the already tenuous Berlin coalition. Crime in Germany is way up. Big mistake made all over Europe in allowing millions of people in who have so strongly and violently changed their culture!

We don’t want what is happening with immigration in Europe to happen with us!

Children are being used by some of the worst criminals on earth as a means to enter our country. Has anyone been looking at the Crime taking place south of the border. It is historic, with some countries the most dangerous places in the world. Not going to happen in the U.S.

It is the Democrats fault for being weak and ineffective with Boarder Security and Crime. Tell them to start thinking about the people devastated by Crime coming from illegal immigration. Change the laws!

2 thoughts on “President Trump Declares U.S. Will Not Be A Migrant, Refugee Camp On His Watch”