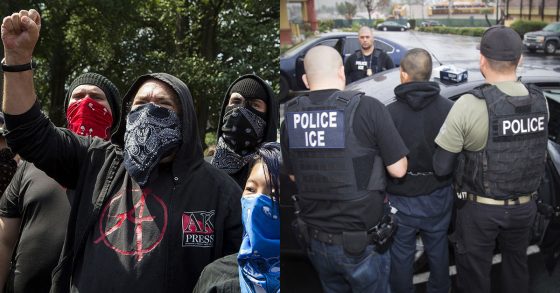 Kyle Perisic over at The Daily Caller is all over this story today. He has the scoop on Antifa, the violent communist group that claims to be anti-fascist while being exactly that, and how they are doxxing ICE employees. They tweeted out a list of over 1,500 Immigration and Customs Enforcement agents’ identities to their 3,600 followers on Twitter Tuesday morning. The actual culprit is Sam Lavigne, a far-left artist and game designer, who is also an adjunct professor at New York University’s Tisch School of the Arts. He should be immediately fired and reported to authorities over this.

The Twitter account “nebraska antifa” was the first to broadcast the personal information of ICE officers compiled from information found on LinkedIn. This is very dangerous for ICE agents and their families. Actor Peter Fonda earlier today on Twitter called for their homes to be surrounded by millions of protesters to scare the heck out of them and their families. Now this. “Some enterprising hero archived the ICE employees listed on linkedin,” the tweet reads. Lavigne says he “scraped LinkedIn for people that work for ICE.” That’s just evil.

Evidently the original post of ICE personal information has been deleted, but there is an archived post floating around out there that is accessible. Lavigne says he created the database in response to ICE’s “inhumane” efforts on the border. “I’ve downloaded and made available the profiles of (almost) everyone on LinkedIn who works for ICE, 1,595 people in total. While I don’t have a precise idea of what should be done with this data set, I leave it here with the hope that researchers, journalists, and activists will find it useful,” Lavigne wrote on Medium. Man, I hope the feds pay this guy a very personal visit.

The doxxing post spread from Medium to r/ChapoTrapHouse on Reddit, a subgroup for a podcast made up of far-left activists who encourage doxxing those who they deem Nazis and alt-right. Some of those who frequent that group consider ICE and National Security Agency employees to be fascist Nazis. That’s their justification for all of this. Doxxing is the action of making public a person’s personal information, such as where they live, where they work, their phone numbers and emails, etc. “Doxxing ICE agents is good and moral,” one user wrote on the Reddit post. No, it’s not.

According to The Daily Caller, “Lavigne also tweeted a screenshot of the personal Twitter account of ICE’s chief technology officer the day after Father’s Day, which included a picture of the official with his son.” It is no wonder that DHS and the FBI classify the group as a domestic terrorist organization. You can also find Antifa all across Europe, so they are far more than just a domestic threat. There are entire towns in Germany they totally control just like a gang would and just as violently.

As this whole border hysteria has been whipped up by the left over separating illegal immigrant children from their alleged parents, Antifa has stepped up their threats and hateful rhetoric as well. ICE has received tremendous backlash over this insanity. Now, their lives and the lives of their loved ones are being actively threatened on multiple fronts. It’s disgraceful and barbaric. If something happens to one of those agents or a member of their family, there will be hell to pay and that is what Antifa wants… an all-out war in the streets. That’s Antifa’s favorite playground.

I scraped LinkedIn for people that work for ICE: https://t.co/MJuuyMeAal