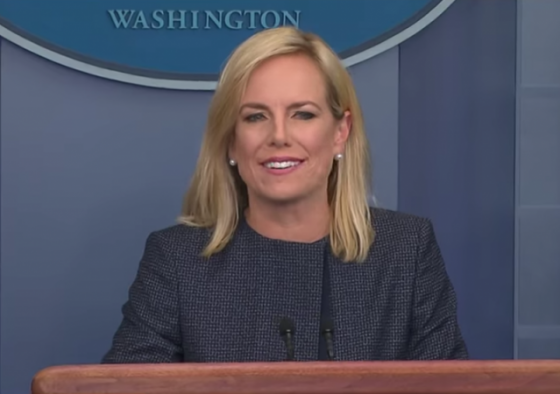 Democratic Socialists of America is getting very bold these days. In Washington, D.C., as Homeland Security Secretary Kirstjen Nielsen was having dinner at a Mexican restaurant, DSA chased and harassed Nielsen, yelling, “Shame!” They literally chased her from the building.

According to a Facebook Live video posted to DSA’s Facebook page, protesters surrounded Nielsen’s corner table at MXDC Cocina Mexicana, which is located just a few blocks from the White House. The protesting socialists chanted about Nielsen and the Trump administration’s zero tolerance policy for illegal immigrants. They called her a “fascist pig” and said they couldn’t believe she had the “f**king gall” to eat at a Mexican restaurant while the administration is separating illegal immigrant families who seek to enter the country outside of certified ports of entry. DSA also demanded the complete abolition of the Immigration and Customs Enforcement agency at DHS.

“We will not stand by and let Sec. Nielsen dine in peace, while she is directing her employees to tear little girls away from their mothers and crying boys away from their fathers at our border,” a member of the group’s steering committee told CNN.

The D.C. police were called and eventually showed up. This is the caption under the video:

We’re in downtown DC disrupting DHS Secretary Kirstjen Nielsen’s dinner at MXDC. The irony isn’t lost on us that this is a Mexican restaurant. Nielsen has led the program to tear apart familes [sic]. We are here to tell her to put an end to separating families, to step down as head of the department, and that ICE and CBP must be abolished #abolishICE #abolishCBP

Demonstrators occupied DXDC Cocina Mexicana at around 8 p.m. as Nielsen was attempting to have a meal with an unidentified man, according to a video posted on Facebook.

Staff members try to contain the situation as members of the Metro D.C. Democratic Socialists flood the restaurant, the video shows.

“In a Mexican restaurant of all places,” one protester yells. “The fu–ing gall.”

At another point, a second member of the group plays recent audio of children crying at a detention center in Texas.

“How does it make you feel?” a protester yells.

In another video taken from outside the restaurant at around 8:20 p.m., Nielsen can be seen leaving the eatery and entering an SUV.

A spokesman for Homeland Security later said that Nielsen met some concerned citizens while having dinner.

“The Secretary and her staff heard from a small group of protestors who share her concern with our current immigration laws that have created a crisis on our southern border,” Tyler Q. Houlton tweeted.

Nielsen held a press conference yesterday trying to clarify the situation. A short while ago, I was told that President Trump says he is canceling the congressional picnic scheduled for tomorrow evening because “it just didn’t feel right to me.” Also just breaking, President Trump is signing an Executive Order to stop the separation of families at the border. Kirstjen Neilsen is drafting the EO. I’m not sure I agree with that. It gives special consideration to illegal aliens who are breaking the law.

What’s even worse were those on social media who thought it was funny and started calling for more violence against Nielsen. Actor Peter Fonda tweeted this, “Kristjen Nielsen is a lying gash that should be put in a cage and poked at by passersby. The gash should be pilloried in Lafayette Square naked and whipped by passersby while being filmed for posterity.” A feminist named Jessica Valenti said on Twitter, “DHS secretary Kirstjen Nielsen was confronted at a DC restaurant by DSA protesters and it’s VERY satisfying to watch. She should never be able to show her face in public again.”

Fonda, who is the younger brother of Jane Fonda, said 12 year-old Barron Trump should be “put in a cage with pedophiles.” He also called White House Press Secretary Sarah Sanders and Secretary of Homeland Security Kirstjen Nielsen “g***es,” which he noted is “much worse than c***.” He said Sanders should have her children ripped from her and given “to Stephen Goebbels Miller for safe keeping.” Miller is Jewish, you idiot and he’s not a pedophile. Per the Daily Wire, “He called for the stripping and whipping of Nielsen, too. Additionally, Fonda suggested ICE agents be doxxed and anti-Trumpers find out where their children go to school and harass them.”

“WE SHOULD RIP BARRON TRUMP FROM HIS MOTHER’S ARMS AND PUT HIM IN A CAGE WITH PEDOPHILES AND SEE IF MOTHER WILL WILL STAND UP AGAINST THE GIANT A**HOLE SHE IS MARRIED TO. 90 MILLION PEOPLE IN THE STREETS ON THE SAME WEEKEND IN THE COUNTRY. F***,” Fonda wrote. Classy. I understand that Melania Trump has called the Secret Service on Fonda’s threat to Barron. Good for her.

Regardless, DSA and other Marxist groups are getting more and more arrogant and dangerous out there. They are being supported and rallied by Hollywood celebrities, the left and the media. Kirstjen Nielsen just found that out the hard way.