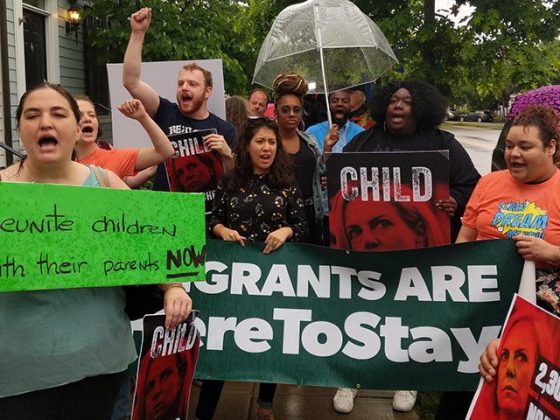 This whole farce over separating illegal immigrant children from mostly non-existent parents at the border needs to stop. It’s gotten totally out of control. President Trump and his children and grandchildren have had their lives threatened. So has White House Press Secretary Sarah Huckabee Sanders and Homeland Security Secretary Kirstjen Nielsen. Nielsen has especially come under fire by communists who harassed her at a Mexican restaurant until she fled this week and then this morning at 7:30 am, about two dozen protesters surrounded her Alexandria townhouse to protest.

Demonstrators played an audio clip of children crying and chanted “free the kids” and “no justice, no sleep,” according to HuffPost’s Philip Lewis. Many people in the crowd carried signs bearing Nielsen’s likeness, captioned: “CHILD SNATCHER.” According to the Huffington Post, the protest was organized by the leftist group CREDO Action. Nothing could be further from the truth. The guardians and parents have broken the law and just like any American who does so, they are separated from their children until their case is adjudicated. This isn’t about those kids… it’s about throwing the borders wide open and letting in any and everyone. The left sees it as a path to a permanent leftist voting base to keep them in power permanently here in the U.S.

Protesters also shouted “Shame!” as Nielsen slipped out the back of her home and walked to her security detail. Secret Service agents were there observing the protest that went on for about an hour. The neighbors got an eye-full. It should not be allowed. This comes just a couple of days after Democratic Socialists of America confronted Nielsen at a Mexican restaurant in D.C. Among those accosting her was Allison Hrabar, a paralegal specialist, who works at the Department of Justice. She should be fired immediately, but crickets so far. “No borders! No walls! Sanctuary for all!” the activists shouted as she ate at MXDC. “Aren’t you a mother too?” The far-left agitators demanded of Nielsen. “Kirstjen Nielsen, you’re a villain! Lock her up!” Oh, and they called her a fascist pig as well. Nielsen fled out of fear of the situation escalating. 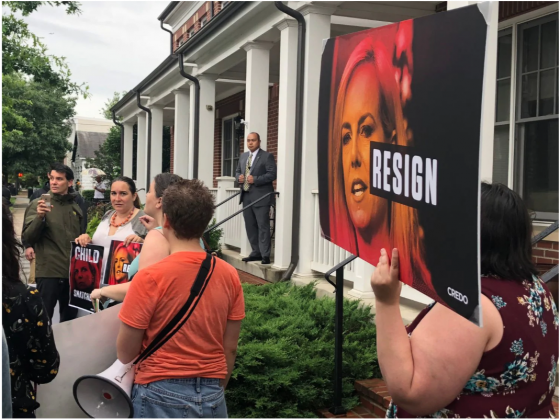 And let’s not forget actor Peter Fonda, 78, in all this. He is Jane Fonda’s little brother. Breitbart stated, “She was also targeted by actor Peter Fonda, who shared a violent and sexually degrading fantasy about the Trump Cabinet leader Tuesday night. “Kristjen Nielsen is a lying gash that should be put in a cage and poked at by passersby,” Fonda tweeted. “The gash should be pilloried in Lafayette Square naked and whipped by passersby while being filmed for posterity.””

President Trump signed an executive order on Wednesday mandating that the separation of immigrant children from their border-crossing parents should be stopped. But that won’t work unless Congress acts. We should follow the rule of law here and stand strong on demanding that the wall be built and our borders secured. Immigration needs to be reformed to only let those in that have merit and can benefit this country.

Those children are taken far better care of than they ever were in their home countries and most of them came here without parents, brought in by coyotes and drug cartels who abused them in horrific ways. So spare us the fake outrage. Nielsen praised the executive action and called on Congress to find a long-term solution to close the border policy loophole. “We ask them to do their jobs. The laws need to be changed,” she said. That’s all she can do and it will never be enough for the left.

From The Daily Wire: “Heidi Hess, the co-director of CREDO Action, pontificated that it was just fine to invade people’s personal lives in order to make a point, saying, “A lot of attention has been on the border, and rightly so, on the children and the families and the detention centers there, but I think the thing that we know is that the people that are making the decisions resulting those detention centers are here in D.C. We feel like it’s really important to hold them accountable everywhere.””

This needs to stop. It is a situation totally manufactured by the left and if they keep it up, Rush Limbaugh is right… someone is going to get killed and then the whole thing will blow sky high on both sides.

Protestors are outside of DHS Secretary Kirstjen Nielsen’s Alexandria townhouse, playing audio of the detained children. She appears to be still be home. pic.twitter.com/akIcxOcM3q

“Beware of Child Snatcher” flyers outside @SecNielsen’s house warn neighbors that this “ruthless hencman” and “human rights abuser” is ripping children from their parents and imprisoning them in cages. Happy Friday! (Credit: Matthew Perdie/@BreitbartNews) pic.twitter.com/bia6ctZX8s

Protestors are chanting “NO JUSTICE NO SLEEP!” and “FREE THE KIDS!”

Neighbors are outside, looking out of windows pic.twitter.com/XUYQxjY5Ul

Two days ago, members of @jewishaction witnessed children as young as 6 or 7 being flown across the country in the middle of the night. Kidnapping is a crime. Secretary Nielsen must resign, right away. #FamiliesBelongTogether #moralemergency #FreeOurFuture pic.twitter.com/0FI1mNEEMk

No human being is illegal. Secretary Nielsen doesn't understand that. She must resign right to. Freedom for families #moralemergency #FreeOurFuture pic.twitter.com/jkYpqi2XQI

Update: Nielsen is hiding in her house and won't come out to explain her cruel and inhumane actions. Her neighbors are pretty interested, however. Secretary, it doesn't have to be this way. Resign. #FamiliesBelongTogether #moralemergency #FreeOurFuture pic.twitter.com/xC0KtzQsrx

We woke up Secretary Nielsen at her home this morning with a protest. Collaborators don’t get to clock out. No justice, no sleep! pic.twitter.com/FeN0fi7gHX

Watch As Protesters Blast the Sounds of the Crying Children, torn from their parent's arms, outside of DHS Secretary, Kirstjen Nielsen’s Home:

I'm sorry, but she deserves this!https://t.co/eIKv3aLQEE