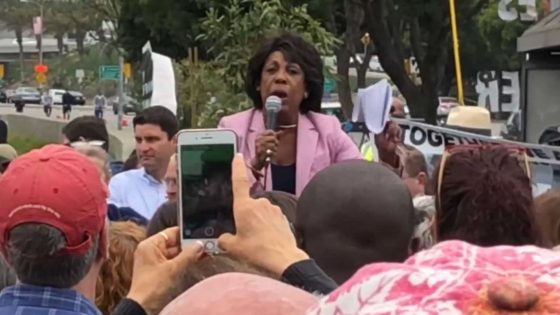 Sen. Maxine Waters (D-CA) is blatantly inciting violence against the Trump administration. Yesterday, she called for leftists to attack members of President Donald Trump’s administration, screaming to a group of supporters that they should not be welcomed anywhere in society. We’ve seen four high-profile women in Trump’s orbit get attacked now. It started with Tomi Lahren. She was having brunch with her mother when a leftist threw water on her. Then this week things really kicked into high gear. Homeland Security Secretary Kirstjen Nielsen, White House Press Secretary Sarah Huckabee Sanders and Florida Attorney General Pam Bondi were all harassed and attacked this week. Waters wants this to be the new norm.

Mad Max gave a hate-filled, rage-fueled rant “during a toy drive outside the Wilshire Federal Building on Saturday,” according to The American Mirror. First, she lied by saying that Trump was “sacrificing our children.” That’s not even remotely true. She’s referring to children of illegal immigrants at the border. Then she called for Trump to be impeached and the mob cheered.

“Waters said, “I have no sympathy for these people that are in this administration who know it’s wrong for what they’re doing on so many fronts. They tend to not want to confront this president or even leave, but they know what they’re doing is wrong. I want to tell you, these members of his cabinet who remain and try to defend him, they won’t be able to go to a restaurant, they won’t be able to stop at a gas station, they’re not going to be able to shop at a department store. The people are going to turn on them. They’re going to protest. They’re absolutely going to harass them until they decide that they’re going to tell the president, ‘No, I can’t hang with you.’ This is wrong. This is unconscionable. We can’t keep doing this to children.”

“She added, “We’ve got to push back. We’ve got to say no. I, for example, have stepped way out there. I said this man needs to be impeached. I know a lot of people think we’re not ready to say that. Some people have said a long time ago he would become presidential. He will never be presidential. This man does not have any good values. I believe he needs to be impeached. As a matter of fact, a long time before he’s doing what he’s doing now with these children. I think he had done enough to undermine this country and to have us understand we cannot trust him, that we should have come with an impeachment resolution. So, I believe we cannot wait until the next presidential election. We have to resist him. I want to see him impeached.””

Then came more incitement. “History will record while he tried to step on all of us, we kicked him in his rear and step on him, she yelled, whipping up the crowd. “If you think we’re rallying now, you ain’t seen nothing yet. Already, you have members of your Cabinet that are being booed out of restaurants…who have protesters taking up at their house, who say, ‘No peace, no sleep! No peace, no sleep!’” Waters snarled. “And guess what,” she predicted, “we’re going to win this battle because while you try and quote the Bible, Jeff Sessions and others, you really don’t know the Bible. God is on our side!” Waters declared. No, He definitely isn’t. Since she pretty much has no faith, that’s just another lie from her. It’s a wonder she wasn’t struck by lightning over that whopper. She’s a self-confessed socialist.

Waters then called for attacks on individual members of the Trump administration, saying: “Let’s make sure we show up wherever we have to show up and if you see anybody from that Cabinet in a restaurant, in a department store, at a gasoline station, you get out and you create a crowd and you push back on them, and you tell them they’re not welcome anymore, anywhere. Mr. President, we will see you every day, every hour of the day, everywhere that we are to let you know you cannot get away with this!” she yelled. Paging the Secret Service. She’s actively pushing to get somebody killed. This will end badly.

Waters’ violent rhetoric comes almost exactly one year after a Democratic terrorist tried to assassinate multiple Republican lawmakers during a baseball practice in Alexandria, Virginia. Now, they are going after all those who work with and for the president. Next, they’ll be sending these thugs after everyone on the right. Hitler used brown-shirted thugs and Mussolini used black-shirted thugs in the 1930’s. Today it is Antifa, Democratic Socialists of America, unions, a ton of radical leftist groups and the Democrats/communists. Same playbook, different century.

Maxine Waters has gone from wacky, to severely unhinged, to dangerously insane. She and other leftists should not be allowed to incite violence against the Trump administration and conservatives. This is quickly spiraling out of control and those such as Waters are pouring gasoline onto a violently explosive communist fire.