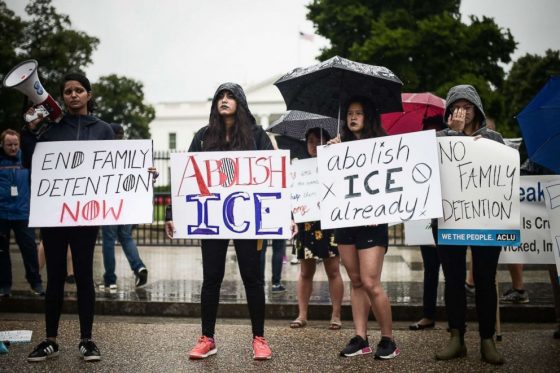 Here comes more violence. Evidently, the violent threats against Department of Homeland Security and ICE employees is off the charts. DHS had already determined there was a heightened threat to their people in response to recent government actions surrounding immigration, according to a letter sent to employees over the weekend. “This assessment is based on specific and credible threats that have been levied against certain DHS employees and a sharp increase in the overall number of general threats against DHS employees,” Claire Grady, acting deputy secretary of Homeland Security, wrote to employees on Saturday.

All of this follows on the heels of the implementation of President Trump’s “zero tolerance” immigration policy. The left is claiming it is separating children from their parents… no, it is separating children from those breaking the law. But even that is not accurate as the children who have parents have been reunited with them over the weekend. The media is claiming it is 2,300… I understand it is closer to 550 children.

After Maxine Waters came out over the weekend and called for Trump administration officials to be harassed and attacked wherever they are found, employees were told to up their situational awareness and watch their backs. They were not to advertise in any way that they worked for DHS or ICE to avoid confrontations. Approximately two dozen threat reports have been issued in the past few days. These threats were made primarily against Immigration and Customs Enforcement officers. Each of these reports is generally related to a specific online threat. All employees are personally contacted by DHS security if they are the target of a violent threat, an official said.

In one memorable example, a senior DHS official living in the Washington. D.C. area found a burnt and decapitated animal on his front porch, according to an official with knowledge of the incident. In addition to the protests, thousands of employees have had personal data leaked on social media, the letter to employees said. On Thursday, WikiLeaks published information on more than 9,000 supposed current and former ICE employees, saying it is important for “increasing accountability,” according to The Washington Post.

The uptick in threats comes amid multiple protests directed at ICE and Customs and Border Protection officers, as well as the DHS secretary. It’s unclear exactly how much the threats have increased. But I would bet it’s a lot. Actor Peter Fonda called for millions of Americans to surround ICE agents’ homes and terrorize their families. This is only the beginning of this nightmare.

In Portland, Oregon, protesters calling themselves Occupy ICE PDX camped out in front of an ICE field office for days, The Oregonian reported. Portland Mayor Ted Wheeler said he supported the protesters, tweeting on Wednesday that he did not want the Portland Police Department “to be engaged or sucked into a conflict, particularly from a federal agency that I believe is on the wrong track.” He said this was the fed’s mess. He added that the demonstration “seemed to be very peaceful.”

I drove by the demonstration yesterday, it seemed to be very peaceful and I was pleased to see that. I want to be very clear I do not want the @PortlandPolice to be engaged or sucked into a conflict, particularly from a federal agency that I believe is on the wrong track (2/4)

Last week, Homeland Security Secretary Kirstjen Nielsen was harassed and accosted while eating at a Mexican restaurant in Washington, D.C., by a group calling itself the Metro DC Democratic Socialists of America. One of the thugs attacking her was a paralegal employed by the Department of Justice. “You’re eating a Mexican dinner as you’re deporting tens of thousands of people separated from their parents,” chanted the protesters. She fled the restaurant before the confrontation escalated. Protesters showed up at her home the next morning and surrounded it. Secret Service had to slip Nielsen out the back way for her safety. Demonstrators played a ProPublica audio of crying children outside her Virginia home while chanting “shame!”

Florida Attorney General Pam Bondi was attacked at a screening of a documentary and fled the confrontation. White House Press Secretary Sarah Huckabee Sanders with seven members of her family was kicked out of a Red Hen restaurant in Lexington, VA. And now this. “People can disagree on policy,” ICE spokeswoman Liz Johnson said in a statement to ABC News, “but it is unconscionable to target our employees and advocate violence against federal law enforcement officers.”

I fear this is going to get a lot worse before it gets better. As James Woods said in response to Maxine Waters fomenting violence: “Now that a United States Congresswoman has called for harassment against Republicans and the inevitable violence that will come of it, I urge all of you to a) get armed, and b) vote. Your life literally depends on it.”

Now that a United States Congresswoman has called for harassment against Republicans and the inevitable violence that will come of it, I urge all of you to a) get armed, and b) vote. Your life literally depends on it.