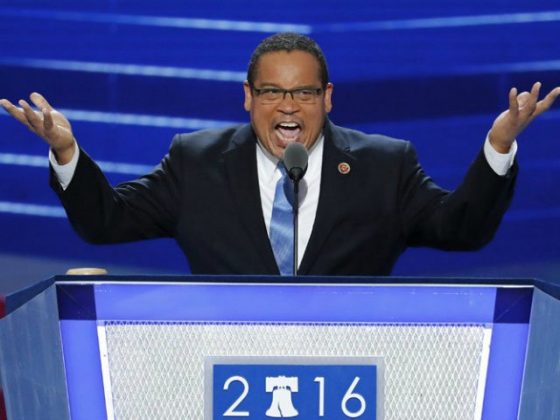 Rep. Keith Ellison (D-MN) had the unmitigated gall to suggest this morning that Supreme Court Justice Neil Gorsuch had been bribed to vote in support of President Trump’s travel ban, which stops unvetted refugees from countries that are hotbeds of terrorism from coming into the U.S. The Supreme Court handed down a 5-4 decision upholding President Trump’s “travel ban” as constitutional. Ellison stated that Gorsuch had “done what his paymasters sent him there to do,” Ellison told CNN. He was furious, calling the decision discriminatory and racist as usual.

“Today’s decision undermines the core value of religious tolerance on which America was founded,” Ellison said in his statement. “I am deeply disappointed that this ruling gives legitimacy to discrimination and Islamophobia.” “Our country has gone through some ugly days. The Supreme Court in the 1850s said that it was OK to own a black person, that was the Dred Scott decision. That decision hit the dust bin of history … and this one will too,” Ellison told CNN’s Kate Bolduan on “At This Hour.” “Discrimination and racism and hatred and religious bigotry is never going to be winning in the end,” Ellison said.

Currently, Ellison is the deputy chair of the Democratic National Committee. He has announced he is leaving Congress to run for the attorney general spot in Minnesota. It can’t be soon enough in my book. This guy is incredibly deranged and dangerous. He’s a committed Islamist and communist. Earlier, he compared the decision in Trump v. Hawaii to the Supreme Court’s infamous Dred Scott decision, which upheld slavery in the pre-Civil War era, which is just patently ridiculous. There is so much stupidity and violence floating around these days it makes my head spin.

SCOTUS upholding Muslim/Travel ban is reminiscent of Taney Court’s Dred Scott decision, in which an partisan court reached a discriminatory holding to support a futile attempt at suppressing human dignity. The dustbin of history awaits this one too. https://t.co/FVSYJbbFVw

Ellison went on to expand on his criticism in a telephone interview with CNN’s Kate Bolduan, comparing the decision to Plessy v. Ferguson (1896), which upheld racial segregation, as well as Korematsu v. United States (1844), which upheld the internment of Japanese-Americans in World War II. This guy is just unhinged – Trump’s travel ban and the Japanese internment camps have absolutely nothing in common and he knows it.

“The Supreme Court has said that no matter how bad the discriminatory language is, before, during and after President Trump’s run and his service, as long as he puts a very thin veneer of national security on top of all that discrimination and racism, they will buy it,” Ellison said. “As long as a pig has some lipstick on it, it’s fine, and that is what they have said.”

Ellison added, “It just proves one thing: if you steal and rip off a Supreme Court justice, then you can try to jam any kind of nasty racist ugly policy you can down the throats of the American people.” He is of course referring to the fact that the Senate Republicans blocked the confirmation of then-President Barack Obama’s appointee, Merrick Garland. Obama nominated Garland after constitutional originalist and conservative Justice Antonin Scalia passed away in 2016. Instead, it was delayed until President Trump came into power and he chose Gorsuch to fill the seat in 2017.

Rep. Keith Ellison reacts to the travel ban ruling: “As long as [Trump] puts a very thin veneer of national security on top of all that discrimination and racism, they will buy it. In other words, as long as a pig has some lipstick on it, it's fine." https://t.co/TCZUC1dYCN pic.twitter.com/S4ad1mAa3z

“[Trump] has his Supreme Court tailor-made to his ugly philosophy, this partisan’s court,” Ellison later said. He added: “Gorsuch really should not be on the Supreme Court. In my view, he may be there, but he’s not there properly. You know, you can do that. I mean, you can jam in a Supreme Court by denying a sitting president their right to appoint the Supreme Court justice. That’s exactly what happened. And Gorsuch has done what his paymasters sent him there to do. And so it’s a shame, but I just know, and have deep faith, that the best impulses of this country are about liberty, about equality, about religious liberty and freedom, and we’re just not going to stop and we will prevail.” No, you won’t.

He also said that the Court majority had “tainted themselves,” but vowed to press ahead, politically: “We’re not daunted … Discrimination and racism will never win in the end. So we’re just — we’re fired up and pushing forward.” Good luck with that. “The people who believe in dignity of all people, who believe in freedom of faith and freedom of religion in America, we’re not going to stop fighting,” he continued. “In fact this is going to enliven us, this is going to inspire us to push even further and harder to establish the dignity of all people in this country. We’re not daunted here. We’re going to keep on pressing.” And we’ll keep fighting you all the way because what Ellison and his comrades want is not ‘dignity’, it is sheer Marxism.

Sounds like sour grapes to me. I’m thrilled that the Supreme Court validated Trump’s travel ban. It’s about damn time.