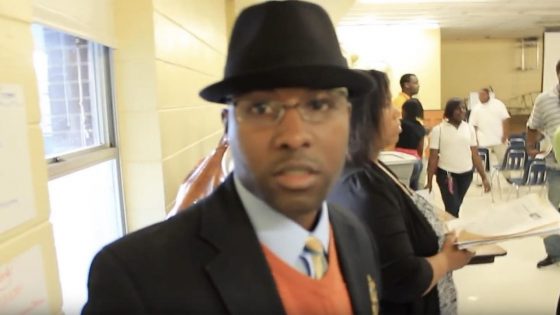 Mauricelm-Lei Millere is a black radical extremist who also goes by the name Minister Mauricelm X. He’s the same guy who previously called for the killing of police officers after police fatally shot Alton Sterling in Baton Rouge, Louisiana, in 2016. He’s known better for being one of the founders of the African American Defense League. The other founder is former head of the New Black Panther Party, Malik Zulu Shabazz. You remember him right? The guy that wants to kill all ‘crackers’. That guy.

One alleged member of the African American Defense League was Micah Johnson, who fatally shot five and wounded nine other officers in a 2016 ambush in Dallas. “Millere is known for calling for violence against police specifically, on a regular basis,” Oren Segal, director of the Anti-Defamation League’s Center on Extremism, told the New York Times after Johnson’s ambush. “Usually after a high profile police-related shooting he takes to social media to encourage violence against police,” Segal added.

Which brings us to Millere’s latest call for violence. He is now summoning activists around the country to inflict revenge on Pittsburgh, Pennsylvania police officers, after the shooting death of 17 year-old Antwon Rose. Antwon was killed on June 19 by a police officer who conducted a traffic stop after the vehicle in question was tied to a non-lethal drive-by shooting. There is video of the encounter and it does not look good for the police. But I would also warn people that they don’t have the full story yet on this. What it looks like is that two or three young men were stopped and handcuffed and then proceeded to run away. At that point, it looks like Officer Michael Rosfeld shot Antwon in the back, killing him.

It does not appear that any suspect fired on the officers. Rose, who was a Woodland Hills High School honors student, was hit several times and died sometime later in a nearby hospital from three gunshot wounds. Allegheny County Police Superintendent Coleman McDonough said that the incident was under investigation and Rosfeld was put on leave. That is standard procedure in a shooting these days. He also added that two guns were found in the vehicle after police executed a search.

After the shooting, there were days of protests and a great deal of rage in the black community. The protests are still going on this week. Dozens of protesters shut down traffic in downtown Pittsburgh during morning rush hour this morning in a continuing call for justice over the fatal police shooting of Antwon Rose, who was buried yesterday. Marchers have disrupted the city repeatedly in the week since Rose Jr. was killed by a white police officer in nearby East Pittsburgh.

On Saturday, Millere posted on Facebook a call to arms:

Dispatch To Pittsburgh Is Written In Blood and No Less!

Attention: To All Who Is Concerned!

We are on our way to Pittsburgh to apply the laws of an eye for an eye, in self-defense of our younger black brother, who was murdered hours earlier!

We have no alternative! We must kill the police, that are killing our black children & Families In Self-defense!

This police must not be allowed to live in peace/or War!

We have taken oaths of death before dishonor, to right the wrongs that are happening in our communities (both foreign and domestic)! I am enacting this Black Nationalist/Internationalist Oath Now!

We’re arriving to Pittsburgh to ‘Right This Wrong!’ We are coming to Pittsburgh ‘To Die If Necessary’ in Self-defense But ‘We Demand The Life of The Officer That Killed Our Younger Black Brother or Any Blue Life Will Do!

We Are Seriously Considering Instituting An Annual Purge Across America — Against All Racist White Organizations, All Racist White Police, And All Their Ignorant, Conformed, Black Coons/Goons, for the sins/killings that are being committed against our people (daily, monthly, annually) by such enemies (both foreign and domestic )!

We cannot/will not accept any less! We Will Die To Fulfill This Cause In Self-defense! May Allah Be With Us Until Whatever End!

A Police Cruiser attempts to push through the crowd as a rally shuts down Braddock Avenue a day after an East Hills Police Officer shot 17-year-old Antwon Rose, a Woodland Hills High School honors student during a traffic stop. @TribLIVE #AntwonRose pic.twitter.com/hJsCyUeJcP

Why he hasn’t been detained for inciting violence against police officers, I have no idea. Michael Rosfeld, 30, had been on duty in East Pittsburgh, PA, for only three weeks and was only sworn in less than two hours before the incident, although he has been an officer in the region for seven years. Rosfeld had previously worked in Harmarville and for the University of Pittsburgh Police Department.

Allegheny County Police Superintendent Coleman McDonough said last Wednesday that during the drive-by, the shooter fired nine .40 caliber rounds at the victim. The victim also returned fire. He also noted that, under Pennsylvania law, there are circumstances that permit officers to use lethal force on a fleeing suspect. It is allowed to prevent death or serious injury to an officer or another person or if the suspect has used or threatened violence or possesses a lethal weapon. However, as it stands right now, it doesn’t look like Antwon posed a threat and he was unarmed. There are a lot of unanswered questions here.

What isn’t at question is Millere and his New Black Panther Party comrades wanting to kill police officers. That needs to be stopped before it happens. The protests aren’t helping and the grieving mother isn’t either. Michelle Kenney said, “He murdered my son in cold blood,” referring to the police officer who shot him three times. Kenney sobbed, “I miss my baby… Every time you turn on the TV… It’s a young African American male shot by the police and you say, ‘I feel sorry for them’. But them is me. Them is him.” The mother said, “It was like he was taking out target practice on this young man’s back. He didn’t flinch, he didn’t say, ‘stop running’.” That will whip up the New Black Panthers and others into a murderous rage no matter what the facts are. Let’s hope justice is served here one way or the other and soon before more people die.