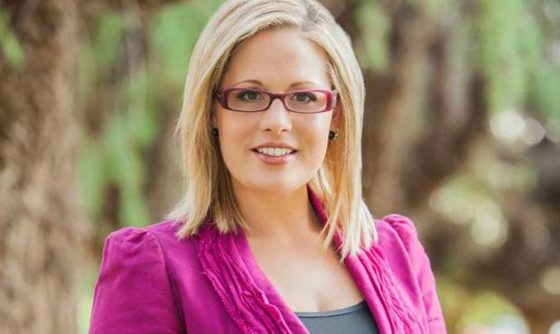 A new NBC News/Marist poll is showing that Democratic Rep. Kyrsten Sinema is leading all three of her Republican rivals in the Arizona U.S. Senate race. That is very alarming and it is bad news. Arizona, what are you thinking? According to this poll, registered voters favor Sinema over Republicans Joe Arpaio, Rep. Martha McSally and Kelli Ward, KVOA-TV reported. The poll also shows that voters slightly favor Rep. Martha McSally over Kelli Ward and Joe Arpaio in the GOP primary. All of these candidates are competing for Sen. Jeff Flake’s vacated seat. He’s retiring, or so he claims. The primary election is Aug. 28. Now, I don’t put much stock in polls, but Sinema should not be anywhere near leading here.

Here are the results of the poll, as listed on KVOA’s website:

The poll was taken on June 17-21. 839 registered Arizona voters were tapped for it. The poll has a margin of error of 4.5 percentage points. McSally has a slight edge over Ward, at 30 percent to 28 percent, respectively. Twenty-one percent of those surveyed indicated they support Arpaio.

Sinema represents Arizona’s ninth district in Congress, which includes Tempe and other areas of Maricopa County. I have family there. I just can’t believe they are voting for someone with communist connections. Sinema is running against Deedra Abboud, a community activist and attorney, in the Democratic primary. Abboud is Muslim and got publicity last year when some hateful comments were aimed at her on Facebook. She is the first Muslim candidate in Arizona to run. If I were a Democrat, I would not vote for either one. Just sayin’.

Why is Arizona so important in this election? Because it is considered a must-win in the Democrats’ bid to take over the Senate in the 2018 midterms. The general election takes place on Nov. 6.

Co-signing the advertisement with Sinema were Communist Party USA members Joe Bernick, Jack Blawis, Lem Harris, Lorenzo Torrez, Anita Torrez, Carolyn Trowbridge, Steve Valencia, the Tucson and East Valley Clubs of the Communist Party USA and party fronts, the Arizona Peace Council and the Salt of the Earth Labor College. This support for the communist cause was not a “one off’ or an aberration. In 2003, Sinema again put her name to the Arizona Communist Party’s May Day greetings page. 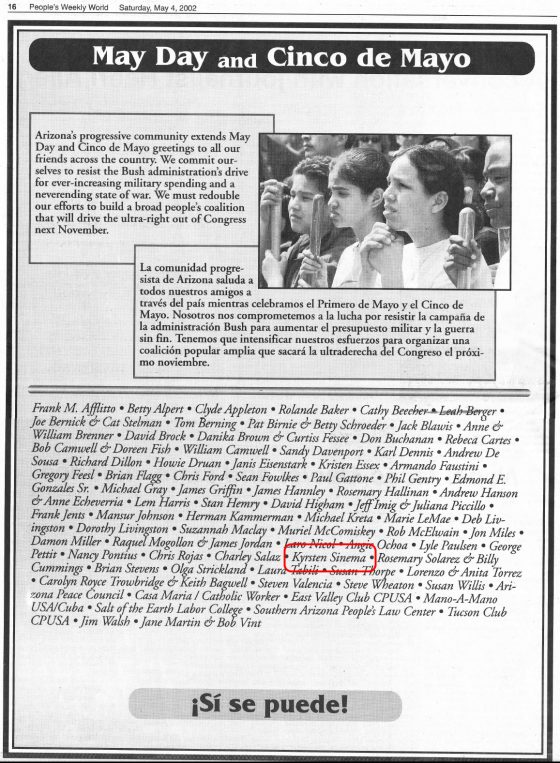 Sinema was raised in the Mormon faith. She has a Bachelor’s degree in social work from Brigham Young University. Kyrsten Sinema holds both a law degree and a Master’s degree in Social Work from Arizona State University, and is currently pursuing her Ph.D. in the School of Justice and Social Inquiry at ASU. She is an adjunct professor in the School of Social Work at ASU and practices law when not in session. She’s no dummy. Sinema is a well-educated, aspiring Marxist.

Kyrsten is anti-Israel, pro-abortion and is for open borders. She also helped put together Obamacare and is a supporter of CAIR. In fact, what may be her downfall is she is too radical for her base there in Arizona. All of this is why Kyrsten Sinema should not win that Senate seat in Arizona. I would urge the voters there to take a long hard look at who they are electing to office.