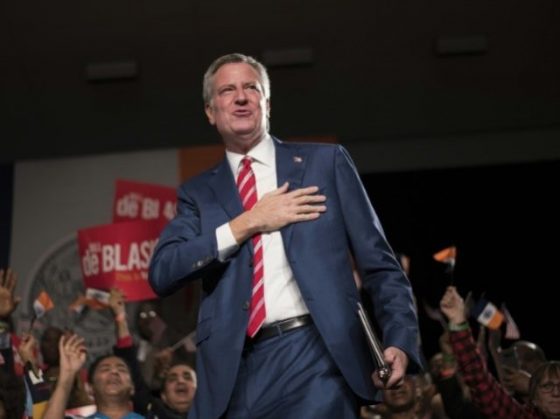 The new rallying cry from the left is to abolish ICE. It’s part of a Marxist platform that aims to get rid of ICE, police and prisons. I know you won’t be shocked in the least that comrade New York Mayor Bill de Blasio has jumped on the bandwagon for this. But he’s hardly alone. All of this used to be considered far-left, now it’s mainstream liberalism. It’s sheer communism. The left wants open borders and therefore ICE must go. New York Sen. Kirsten Gillibrand and Mayor Bill de Blasio have added their support to the cause in the last 24 hours.

“I believe that [Immigration and Customs Enforcement] has become a deportation force … and that’s why I believe you should get rid of it, start over, reimagine it and build something that actually works,” Gillibrand said in a CNN interview Thursday night. California’s Kamala Harris has called for ICE to be terminated as well. “We should abolish ICE,” de Blasio said Friday morning on WNYC radio. There’s a whole list of Democrats calling for this and one of them has entered a bill to actually do away with ICE. It will never go anywhere, but not for lack of trying from the left.

Gillibrand is the first sitting senator to endorse the ‘abolish ICE’ push. She’s considered a potential 2020 presidential contender. I don’t think this is going to help her presidential aspirations. But she’ll find that out herself. De Blasio and Gillibrand join numerous other Democratic candidates, House members, liberal commentators and writers who have fought back against the Trump administration’s “zero tolerance” immigration policies by calling to gut ICE, which identifies, arrests and deports illegal immigrants inside the United States. They also stop a lot of crime committed by both illegal aliens and refugees coming into the U.S. But they don’t care about that.

.@NYCMayor tells @BrianLehrer: “We should abolish ICE.” De Blasio also suggested Bernie Sanders would have won the White House had he been the Democratic nominee in 2016. De Blasio backed Clinton over Bernie.

If leftists can get rid of ICE, they are that much closer to throwing the borders wide open and allowing everyone in unfettered. They need these people to pad their voter base and to create a permanent political majority to basically take over the United States. Alexandria Ocasio-Cortez’s shocking win against Rep. Joseph Crowley (D-NY) pushed the move into overdrive. It’s also turned the Democratic Party’s leadership on its head. Crowley was supposed to take over for Pelosi. No longer – Ocasio-Cortez is the fresh, new millennial Marxist face of the Democratic Party. She will usher in a wave of young communists that will once and for all shove the Democrats to the far-left permanently.

Ocasio-Cortez emphasized her support for abolishing ICE during her campaign and even protested outside an ICE center in Texas. She had slick propaganda buttons made up that endorsed abolishing ICE as well. “Its extra-judicial nature is baked into the structure of the agency and that is why they are able to get away with black sites at our border, with the separation of children,” the Democrat said in an interview this week. It doesn’t matter that what she says is a lie… it’s their new cause du jour. Ocasio-Cortez is here to raise more than a little hell… Venezuela style.

“As overseen by the Trump administration, ICE operates with virtually no accountability, ripping apart families and holding our friends and neighbors indefinitely in inhumane detention centers scattered across the United States,” the 28 year-old Democrat said. “[I] believes that if we are to uphold civic justice, we must abolish ICE and see to it that our undocumented neighbors are treated with the dignity and respect owed to all people, regardless of citizenship status.”

More from Fox News — the Dems are really lining up on this one:

The focus on ICE comes in the wake of the controversy over the Trump administration’s “zero tolerance” policy, which called for all illegal border crossers to be prosecuted. This in turn led to the separation of families due to longstanding detention rules, until President Trump signed an executive order last week ordering families be detained together.

With that controversy in the headlines, the abolition of ICE — which has long been the purview of far-left sections of the Democratic Party base advocating for open borders and no deportations — has moved from being a slogan on protest placards to an idea being mulled by rumored 2020 hopefuls.

New York Gov. Andrew Cuomo also has come under heavy pressure from the left to call for the elimination of ICE, particularly amid a far-left challenge from actress and activist Cynthia Nixon — who called it a terrorist organization.

And Sen. Kamala Harris, D-Calif., who has been floated as a 2020 Democratic contender, said that the U.S. should consider “starting from scratch” for ICE — though stopped short of calling to abolish it.

In Oregon, Rep. Earl Blumenauer, who voted against the agency’s creation in 2002, doubled down on his opposition in a recent Medium post in which he called for it to be shut down.

“We should abolish ICE and start over, focusing on our priorities to protect our families and our borders in a humane and thoughtful fashion,” he said.

“ICE operates as an unaccountable deportation force,” Fallon tweeted. “Dems running in 2020 should campaign on ending the agency in its current form.”

And this isn’t limited to deep-blue states either. Rep. Mark Pocan (D-WI) is the guy I mentioned earlier who introduced the bill to abolish the agency that was set up during President George W. Bush’s administration in the wake of 9/11. “I’m introducing legislation that would abolish ICE and crack down on the agency’s blanket directive to target and round up individuals and families,” Pocan said in a statement. “The heartless actions of this abused agency do not represent the values of our nation and the U.S. must develop a more humane immigration system, one that treats every person with dignity and respect.” Yes, and grants citizenship to everyone who comes here period.

Many Republicans see this extreme shift to the left as a political gift. That it may render Democrats unelectable. But given the win of Ocasio-Cortez and other DSA candidates, I’d be very careful to just assume that. That is the way countries are lost to communism. It’s never possible to become a communist country until it happens. Then it’s too late. If you aren’t vigilant and fight creeping Marxism, one day you wake up and you are surrounded by comrades that can’t figure out what just happened. “Based on the last week, Democrats apparently want to campaign on open borders, mass migration, & abolishing ICE,” Sen. Tom Cotton (R-AR) said on Twitter. “Give them points for honesty. Let’s vote.”

Comrade de Blasio said, “Every country needs reasonable law enforcement on their borders. ICE is not reasonable law enforcement. ICE is broken, it’s divisive and it should be abolished.” What he really means is there should be NO law enforcement. That’s the ‘reasonable’ part of his flawed argument. He joined more than 20 other mayors in traveling to the southern border last week and was turned away from a migrant detention center in Tornillo, Texas. “This is our federal government denying access, and not allowing information, and it’s not America. It’s crazy,” de Blasio said as he demonstrated outside Tornillo Migrant Children’s Facility.

Democrat @SenGillibrand: “I believe you should get rid of [ICE], start over, reimagine it, and build something that actually works #CuomoPrimeTime https://t.co/3SwLWVK0Fa pic.twitter.com/HnpFj19w0z

What’s crazy is that he’s lying. He knows those facilities are clean and safe. The children have soft, warm beds, hot meals, medical treatment and are provided studies. Their clothes are clean and they are being well cared for. Which is more than you can say of the conditions they came here from. “I’ve never seen anything like this,” de Blasio scoffed. “These are public facilities paid for with taxpayer dollars. How on earth are we not allowed to see what’s happening to these children? It’s astounding, and it feels really un-American.” Why in the world would they just let strange politicians in? These children are already emotionally scarred without leftists posing for propagandic selfies with them.

This needs to be stopped. ICE is a badly needed piece of law enforcement on the border and elsewhere. Communists are getting very brazen here in the U.S. and George Soros is behind a lot of this. I think we should abolish them instead.

No bans.
No walls.
No fences.
No chains.
No justice – no peace.

We will fight, we will vote, and we will run until hate is dismantled.