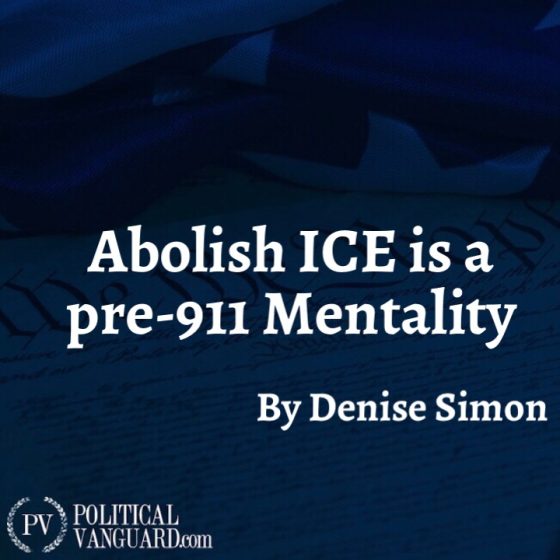 In what may become a new litmus test, high-profile Democrats want to abolish the U.S. Immigration and Customs Enforcement (“ICE”). In doing so, they have been using hyperbole such as ‘black sites’ and ‘deportation force’ – not to mention failing to remember the lessons of 9/11.

Despite the president changing U.S. policy on border detentions, the open-borders advocates continue to protest.  Fueled by far-left benefactors like George Soros,  each weekend, there are protests and some have actually turned violent, such as the bloody unrest in Portland, Oregon.

What are the anti-ICE, pro-immigrant people missing?

There is a grassroots movement where citizens are fighting back to regain sovereignty. How about Brexit? There are other countries in the European Union that may follow Britain, such as Scotland or Italy. This whole globalism thing has been found to have dangerous components. Open borders give rise to lawlessness, confusion, fraud, death and trafficking of all sorts.

Immigration and Customs Enforcement is a rather young agency, established formally in 2003 with a real purpose, just a short time after the attacks on our country on 9/11. There was a rightful concern and in some cases a panic with not knowing who was in our country, how they got here and what they are doing here. For the continued sake of public safety, that condition remains as laws have gaps, while others invite questionable people in. Once investigated and with evidence, those people do need to be deported.

ICE holds the responsibility for many threatening cases such as female genital mutilation, an Islamic crime against women that occurs in America. Some of those cases involve people in the United States under a temporary visa, on visa overstays or just using falsified documents to enter the country.

ICE also has the lead on DarkNet vendors where illegal and illicit goods are sold and traded, such as drugs, counterfeit goods and weapons.

It was not too long ago, with the assistance of ICE, that Obama and Trump both deported Russian illegals that were part of spying and espionage rings and intellectual property theft. When it comes to gangs, no real description is required as we know full well about MS-13. There is also a Japanese gang known as Yakusa, which is an international organized crime syndicate. They have cells in Seattle, Las Vegas, Los Angeles, Chicago and New York City. The FBI maintains 160 violent gang safe street task forces nationwide. If deportation is declared by the court in a criminal case, that is the role of ICE.

In 2007-2008, the United States prosecuted a case known as the Holyland Foundation trial. The Department of Justice handed down countless convictions for material support to Hamas, a terror organization. Many received sentencing in U.S. prisons and others were deported.

Are our memories so short that we forget Farook and Malik that were the San Bernardino terrorists? How about in 2016, where two refugees were arrested, both Palestinians born in Iraq. One was from Houston, while the other was from Sacramento. How about Sayfullo Habibullaevic Saipov? He was born in Tashkent and came to the United States in 2010 on a diversity immigrant visa. He rented a U-Haul truck and mowed down people in lower Manhattan on November 1, 2017. If government intelligence agencies, policy and tracking were well oiled machines, ICE would have detained him and deported him.

Facts are stubborn things. One such fact that was included in congressional testimony reported that since 2001, there were 549 convictions for international terror related cases. Of that number, 254 were not U.S. citizens and 148 received U.S. citizenship through naturalization.

Are the Democrats so shallow and so twisted that they demand ICE be abolished, but say nothing of the increased threat to public safety if ICE was re-tooled and open borders was a human right policy?

The Supreme Court decision to uphold President Trump’s travel suspension is hardly a Muslim ban since North Korea and Venezuela are part of proclamation 9645. There are countries that cannot provide or won’t provide credible background information on people attempting to enter the United States. The Trump White House is suspending distinctive travel requests until such time that a country can and will provide the necessary information.

We have come a very long way since 9/11 to enhance security, protections, intelligence, policies and procedures. Tell those Democrats this plan to abolish ICE has another threatening component and they have short memories. Pre-9/11 attitudes are reckless and ANTIFA should be designated a domestic terror organization in the meantime.