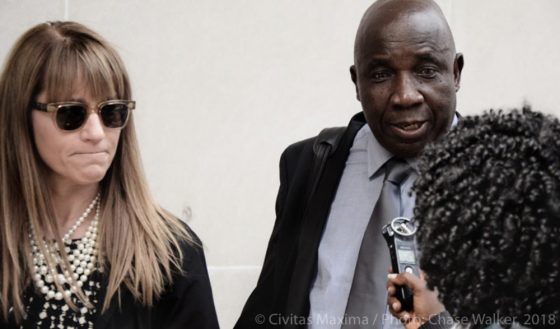 The trial was 3 weeks long and included witnesses and victims including child soldiers that described the most horrific crimes. His sentencing hearing is scheduled for October 15, 2018 and he faces 110 years in prison. Oh yeah, a $4 million fine in USD.

He was arrested in 2014 in Collingdale, Pennsylvania. The case was investigated by U.S. Immigration and Customs Enforcement Homeland Security Investigations and the Federal Bureau of Investigation.

PHILADELPHIA – On July 3, 2018, a defendant in Collingdale, Pennsylvania was found guilty by a federal jury of immigration fraud and perjury charges, following a U.S. Immigration and Customs Enforcement (ICE) Homeland Security Investigations (HSI) led investigation, with assistance from the Federal Bureau of Investigation (FBI).

Jucontee Thomas Woewiyu, 72, lied on his application for U.S. citizenship by denying that he advocated the overthrow of any government by force or violence and by denying that he ever persecuted any person because of membership in a social group or their political opinion.

Woewiyu is a founder and the former Minister of Defense, chief spokesperson, and negotiator for the National Patriotic Front of Liberia (NPFL), which was an armed rebel group led by Charles Taylor and committed to removing the Samuel Doe government forcibly from power in Liberia in the late 1980s and 1990s. On numerous occasions over the years, Woewiyu publicly confirmed his prominent position in the NPFL and advocated the overthrow of the Doe government by force or violence.

During the defendant’s tenure, the NPFL conducted a particularly heinous and brutal military campaign, characterized by torture, rape, forced sexual slavery, conscription of child soldiers, and murder. The jury heard evidence from almost twenty Liberians who lived through Liberia’s notoriously brutal first civil war, from 1989 through 1995. At trial, multiple individuals testified about being forced to become child soldiers under Woewiyu and the NPFL. Additionally, the jury heard testimony about NPFL soldiers cutting off victims’ body parts in front of Woewiyu, while others described checkpoints with skulls and severed heads on stakes (some still dripping with blood) and intestines for ropes, as well as the ethnically based massacre of a village at the hands of the NPFL.

“Today’s verdict clearly demonstrates that this nation will never be a safe haven for human rights violators and war criminals,” said Marlon V. Miller, Special Agent in Charge of HSI Philadelphia. “HSI will not allow our country to be a place where individuals seeking to distance themselves from their pasts can hide or evade detection.”

Since approximately Jan. 13, 1972, Woewiyu has had Lawful Permanent Resident status in the United States. On Jan. 23, 2006, Woewiyu applied for U.S. citizenship by submitting a Form N-400. On that form, and in his immigration in-person interview, Woewiyu swore and certified under the penalty of perjury that, among other things, he had never advocated (either directly or indirectly) the overthrow of any government by force or violence, and that he had never persecuted (either directly or indirectly) any person because of race, religion, national origin, membership in a particular social group, or political opinion.

After a three-week trial, the jury began its deliberations on Monday, July 2. The jury returned a verdict on July 3, finding the defendant guilty of two counts of fraudulently attempting to obtain citizenship, two counts of fraud in immigration documents, two counts of false statements in relation to naturalization, and five counts of perjury.

“The defendant’s tenure as Minister of Defense for the NPFL was marked by almost unimaginable violence and brutality,” said U.S. Attorney McSwain. “He attempted to evade all accountability for his gruesome and horrific crimes by fraudulently obtaining U.S. citizenship. Due to the hard work and perseverance of our prosecutors and law enforcement partners, he has nowhere left to hide. Finally, this defendant has been brought to justice. I hope the conviction today can provide some comfort, however belated, to all of his victims and their families.”

Since 2003, ICE has arrested more than 410 individuals for human rights-related violations of the law under various criminal and/or immigration statutes. During that same period, ICE obtained deportation orders against and physically removed 908 known or suspected human rights violators from the United States. Additionally, ICE has facilitated the departure of an additional 122 such individuals from the United States.

ICE is committed to rooting out known or suspected human rights violators who seek a safe haven in the United States. ICE’s Human Rights Violators and War Crimes Center investigates human rights violators who try to evade justice by seeking shelter in the United States, including those who are known or suspected to have participated in persecution, war crimes, genocide, torture, extrajudicial killings, and the use or recruitment of child soldiers. These individuals may use fraudulent identities or falsified records to enter the country and attempt to blend into communities in the United States.