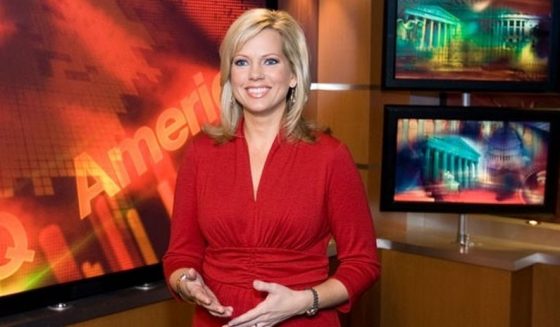 Fox News anchor Shannon Bream was all set last night to go live from the steps of the Supreme Court as President Trump nominated Appeals Court Judge Brett Kavanaugh as the replacement for Justice Kennedy, who is retiring from SCOTUS. However, things took a threatening turn as she was in front of the iconic building. Hundreds of liberals protesting the nomination were looking to get their violence on and Bream had enough sense to get out of there. “Very few times I’ve felt threatened while out in the field. The mood here tonight is very volatile,” Bream wrote on Twitter just minutes after Trump’s announcement in the White House. “Law enforcement appears to be closing down 1st Street in front of SCOTUS.”

Bream followed that with a second Tweet that left no doubt about the precarious nature of her safety, “Literally had to bail on our live show from #SCOTUS. Moving the show back to the safety of the studio. See y’all at 11p.” The left has been harassing and threatening everyone on the right. Some are serious death threats and it doesn’t take much to make a mob turn violent. We’ve seen White House officials harassed in restaurants and senators and Trump supporters have been hassled and threatened as well, both verbally and physically. Leaders of “The Resistance” movement, like Rep. Maxine Waters (D-CA), have called for more harassment of anyone who supports Trump.

Bream spoke of the scene at the Supreme Court on her broadcast last night, “Last year, there were certainly protesters out there and there was definitely opposition to justice [Neil] Gorsuch upon his name being announced that night. Tonight, we saw something different. We did have a plan to have our show out their live. It got so volatile at points that we — we ultimately didn’t feel like it would be safe to do an hour of live television out there,” she said. And that is the state of America currently.

Very few times I’ve felt threatened while out in the field. The mood here tonight is very volatile. Law enforcement appears to be closing down 1st Street in front of SCOTUS.

In Bream’s interview with Nebraska Republican Senator Ben Sasse in the A-Block, Sasse said that the interview was supposed to have taken place at the Court, but “it was a little loud out there” and Bream added that “it got a little too rowdy out there at the Court tonight.” Buckle up kiddos… this is just the beginning. The left is going to go full-blown moonbat crazy on this one.

“Last year, there were certainly protesters out there and there was definitely opposition to justice Gorsuch upon his name being announced that night. Tonight, we saw something different. We did have a plan to have our show out their live. It got so volatile at points that we — we ultimately didn’t feel like it would be safe to do an hour of live television out there,” Bream explained. I don’t blame her for scuttling it. When things are going to skew bad, you can usually feel it. Bream told panelists at the end of one segment that “[t]here’s definitely no kumbaya happening out there on the steps, but there is here tonight” while stating in another to Tony Perkins that there were “folks out there on the steps of the Supreme Court” that aren’t fans of him.

There were no reports of arrests from the demonstrations Monday night. Protesters were seen carrying purple signs reading “Protect Roe,” a reference to the landmark 1973 Supreme Court ruling protecting a woman’s right to an abortion. Others shouted, “Hey Hey, Ho Ho, Kavanaugh has got to go.” But that doesn’t mean a whiff of violence wasn’t in the air. Ask those in communist or Middle Eastern countries… they can tell you that you can just feel it before things go sideways. Bream listened to her gut and given how things are out there these days, that could save your life.

Literally had to bail on our live show from #SCOTUS. Moving the show back to the safety of the studio. See y’all at 11p @FoxNews https://t.co/ChIOQdBBTU

Joining the hundreds of protesters on the steps of the Supreme Court were several senators, including Elizabeth Warren (D-MA), Bernie Sanders (I-VT), Kirsten Gillibrand (D-NY) and Cory Booker (D-NJ). You know, the usual Marxist troublemakers. “Are you ready for a fight? Are you ready to defend Roe vs. Wade?” Sanders said to the crowd. “This is a tough fight but it is a fight that we can win… We have the American people on our side, now we have to go state by state by state to make sure senators do what their constituents want.” Boleshevik Bernie is lying again. The American people are not on their side. Not even close.

“It’s very deadly serious that Roe v. Wade is on the chopping block,” said Sam Goldman, 31, a national organizer for Refuse Fascism, which coordinated a Philadelphia demonstration. That group is in itself fascist. Seven people were arrested in New York City following the president’s announcement after protesters blocked traffic outside of Trump Tower, according to the New York Post. Among those was City Councilman Jumaane Williams, a Democrat who is running for lieutenant governor.

Podcaster Lyndsey Fifield claimed on Twitter that “white men” were screaming at Bream, calling her a “blonde bimbo.” After Bream left the scene, the Daily Caller’s Benny Johnson reported seeing Fox News crew members being “verbally harassed” by protesters as they broke down their equipment.

All of this is spiraling out of control and someone is going to do something that really sets it all off on the left. When you mix politicians, radicals and communists, it’s only a matter of time before it explodes figuratively or literally.

Lot more folks than we usually have at #SCOTUS 9pm on a July night. pic.twitter.com/7w5ivFzSVa

Fox News anchor Shannon Bream says that Democrat activists became so "volatile" after Trump's nomination of Brett Kavanaugh that Fox News had to cancel a live television broadcast at the Supreme Court because it was not safe. pic.twitter.com/PYxis2eIil

Leftist violence, threats, harassment, menace getting out of control. @ShannonBream of @FoxNews had to flee from Supreme Court tonight. @JudicialWatch takes stand, filing ethics complaint against Maxine Waters for incitement against @RealDonaldTrump. pic.twitter.com/7R8T5H0iGX