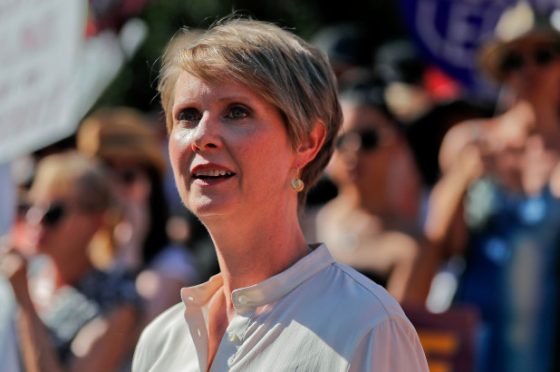 Looks like New York is now ground zero for Democratic Socialists of America. Actress, activist and gubernatorial candidate, Cynthia Nixon, has just proclaimed that she is a DSA member. The actress-turned-candidate for governor enthusiastically embraced the Democratic Socialist moniker for the first time in a statement provided to Politico. She wants to be just like her new comrade-in-arms, Alexandria Ocasio-Cortez.

Nixon, who is backed by the communist Working Families Party, is challenging two-term incumbent Gov. Andrew Cuomo in the Sept. 13 primary. Her spokeswoman, Lauren Hitt, made the point that Nixon endorsed two candidates who are members of the Democratic Socialists of America — Alexandria Ocasio-Cortez, who defeated Rep. Joe Crowley and Julia Salazar, a candidate who is challenging Queens state Sen. Martin Dilan. And then there were three. The left is dropping the mask entirely and going full commie. “She has also talked to other DSA members,” the Nixon spokeswoman added. I bet. DSA feels this is their time to rise and take over. It’s not just New York either.

From Politico for Nixon:

“Some more establishment, corporate Democrats get very scared by this term but if being a democratic socialist means that you believe health care, housing, education and the things we need to thrive should be a basic right not a privilege then count me in,” Nixon wrote. “As Martin Luther King put it, call it democracy or call it democratic socialism but we have to have a better distribution of wealth in this country. I have long stood in support of a millionaires tax, Medicare for all, fully funding our public schools, housing for all and rejecting all corporation donations — all of which align with democratic socialist principles.”

During an interview with The Dig podcast, Nixon said she disagreed with House Minority Leader Nancy Pelosi’s negative response to a question about whether Ocasio-Cortez’s surprise primary victory over Rep. Joe Crowley meant socialism was ascendant in the Democratic Party.

“I think Nancy Pelosi is dead wrong, I think that is exactly what is happening,” Nixon said. “I think that of course wealthy people and big corporations have always had an outsized influence on American politics and world politics, but at this moment, when you look at what the agendas of corporations are and you look at governmental policies, there is almost no daylight between them.”

Nixon is all in on higher taxes on the wealthy to fund more government spending. She opposes privately managed, publicly funded charter schools. And I’m sure she is supporting all of the things that Ocasio-Cortez is: Obamacare, single-payer healthcare, abolishing ICE and the prison system, open borders, massive taxation, free education, free housing, guaranteed employment and a fixed income from the government, raising the minimum wage and the list goes on and on and on. Read the goals of communists… it’s all the same.

For his part, Cuomo has moved to the left in his second term, pushing for increases in the minimum wage, a family leave law and a tuition-free scholarship program for low- and middle-income students attending public colleges. He might as well be a DSAer himself, right along with Red de Blasio. When Cuomo first started out, he was a moderate-to-conservative on fiscal issues, but the Democrats and their base are lurching all the way to the left now and to survive, so is Cuomo.

Nixon met with members of the local chapter of Democratic Socialists of America at a forum Tuesday night, her campaign spokeswoman confirmed. It’s an attempt to win the leftist group’s endorsement. It shouldn’t take much. Not all DSAers are down with her membership however. “She’s not a socialist. Seriously. The DSA is not the f–king Working Families Party (thank god),” Tiffany Berruti, the DSA rep from CUNY said in a lengthy statement handed out at the meeting. Methinks the communist doth protest too much. Berruti described Nixon as a Hillary Clinton supporter. Well, commies of a feather.

Nixon is a New York millionaire… an elitist that is embracing communism. Dutchess County Executive Marc Molinaro, the Republican gubernatorial nominee, said Nixon’s position was out of step with New Yorkers. “Millionaires like Cynthia Nixon may be able to dream about socialist paradises, but here in the real world, people can’t afford the taxes they have,” Molinaro stated. “New York spends too much as is. If Ms. Nixon thinks socialism is the answer, she should ask the people of Venezuela.” Excellent point. Better yet, go live there. Nixon and her wife had combined earnings of over $1.3 million in 2017, according to a May New York Times report. Their adjusted income after tax deductions was $619,799, according to the same report. Nixon has an estimated net worth of about $60 million, Newsweek reported in March 2018.

Nixon also tweeted on Tuesday, “Why don’t pundits who are so obsessed with @Ocasio2018 supporting democratic socialism ask corporate-backed politicians why they are so supportive of unfettered capitalism?” Honey, your redness is showing. Alexandria Ocasio-Cortez of course has endorsed Nixon.

In the end, it’s all totalitarianism. The socialists scream about the communists, but they are leftists, one in the same. Tell you what, we’ll just call all of you fascists and call it good. I know they’ll scream fascism is on the right… no, it’s not. It’s a leftist condition. Liberty is on the right. All commies are the same… deal with it.