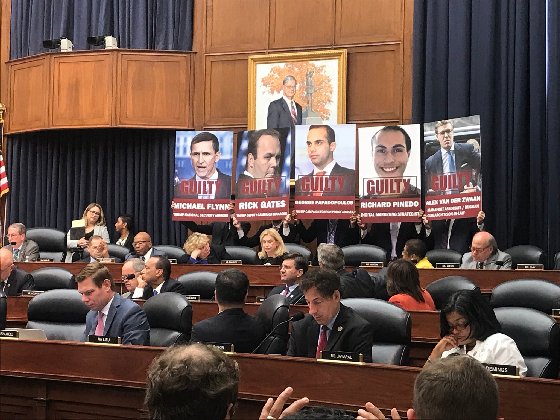 I watched parts of the Strzok hearing today and it ticked me off. I was so angry, I couldn’t even write on it. I’ve calmed down a bit now and I wanted to give you an update on today’s treasonous activities. The Democrats actually applauded Strzok’s obstruction today.

The first thing I saw this morning after Denise Simon kindly pointed it out, was Rep. Elijah Cummings (D-MD) highlighting the number of guilty pleas and indictments secured by Special Counsel Robert Mueller. As he spoke, Democratic staffers then held up five large posters showing the three Trump campaign officials – including Michael Flynn and Rick Gates – and two campaign associates who have pleaded guilty to charges in the special counsel’s probe. House Judiciary Committee Chairman Bob Goodlatte (R-VA) interrupted Cummings and questioned if the posters were appropriate. But unfortunately, the Republicans could not cite a rule disallowing the disgraceful display, so it was allowed.

Many Democrats like House Judiciary Committee, Rep. Luis Gutierrez (D-IL) went on rants against President Trump. They wanted their fifteen minutes of infamy. It was pathetic. So much for decorum on the floor. There was none of that today and frankly, it should have been stopped by Goodlatte.

Republican Texas Rep. Louie Gohmert was the first to really tear into Strzok and he did so over his affair with FBI counsel Lisa Page. Gohmert said he believed Strzok was a liar, which I consider an astute observation, because he is. “I watched you in the private testimony you gave and I told some of the other guys, ‘he is really good, he’s lying, he know, we know he’s lying and he can probably pass the polygraph.’” Strzok has failed a polygraph before as I understand it and it did not cost him his position at the FBI. He also got to decide which emails and texts he would turn over for this investigation and that should never have been allowed.

Gohmert got into a shouting match with Democrats and he let it be known he was having none of it. Good for him. “The disgrace is what this man has done to our justice system!” Gohmert stated. “It won’t be recaptured any time soon because of the damages that you have done to the justices and I have talked to FBI around the country, you have embarrassed them, you have embarrassed yourself and I can’t help but wonder when I see you looking there with a little smirk, how many times did you look so innocent into your wife’s eyes and lie to her about Lisa Page?” Democrats erupted in the chamber shouting “shame” and “harassment.” One female Democratic member on the judiciary committee yelled into her microphone at Gohmert during the rant: “You need your medication.” Exactly why did Goodlatte let that go by? Someone should ask the FBI if they condone affairs among agents.

As for Strzok, I have never seen a more arrogant, condescending, lying bastard. He admitted to Congress today that he “detested” Donald Trump and was rooting for Hillary Clinton to win the 2016 election. Well, duh. “You were both rooting for Hillary Clinton to win and you both detested Donald Trump, were you not?” Republican Ohio Rep. Steve Chabot asked Strzok during the joint congressional hearing. “I think that’s fair to say,” said Strzok. He’s not afraid to admit his bias because he doesn’t think he will face any consequences over all of this. And it wasn’t mentioned that he was actually plotting a coup against President Trump.

Rep. Trey Gowdy gets the prize though for actually having a spine on the floor and slapping Strzok over his actions. I thoroughly enjoyed Gohmert, Gowdy and Jordan nailing the asshat. Gowdy told Strzok that he doesn’t “give a damn” what Strzok appreciated or wanted. Good for him and the rest of us don’t either.

Here’s the full context of one of the most heated exchanges between Gowdy and Strzok:

Gowdy questioned Strzok on why specifically he was let go from the Mueller investigation.

“How long did you talk to him when he let you go?” Gowdy asked.

“My recollection it was a short meeting, somewhere between 15 to 30 minutes, probably around 15 minutes,” Strzok said.

“My testimony — what you asked and what I responded to — is that he kicked me off because of my bias,” Strzok responded. “I’m stating to you it is not my understanding that he kicked me off because of any bias — that it was done based on the appearance. If you want to represent what you said accurately I’m happy to answer that question, but I don’t appreciate what was originally said being changed.”

“I don’t give a damn what you appreciate Agent Strzok,” Gowdy shot back.

“I don’t appreciate having an FBI agent with an unprecedented level of animus working on two major investigations during 2016.”

Strzok answered some questions using the FBI as a defense. He said he was not allowed to answer them which is bull crap and everyone knows it. He did testify that former FBI Director James Comey directed him to focus his time and resources on the Russian election interference investigation over Hillary Clinton’s use of classified information.

Strzok did get into it with Goodlatte when he would not answer questions and at one point it looked like he might be held in contempt. Too bad that did not happen. The Daily Caller did tremendous reporting on this today… here is some of that exchange:

House Judiciary Chairman Bob Goodlatte threatened Strzok with criminal liability if he refused to answer a question from Rep. Trey Gowdy, as Strzok insisted that FBI lawyers counseled him not to answer any questions about ongoing investigations.

“Mr. Strzok, you are under subpoena and are required to answer the question,” Goodlatte asserted.

Ranking Member Nadler interrupted Goodlatte with a point of order and defended Strzok from having to answer the committee’s questions, but Goodlatte shot back, “the point of order is not well taken.”

“Mr. Strzok, you have not stated a valid legal basis for not responding to a question directed to you by the United States House of Representatives,” Goodlatte said. “Either comply with the committee’s directive or refuse to do so, the latter of which will place you at risk of a contempt citation and potential criminal liability.”

Nadler tried to appeal Goodlatte’s ruling that Strzok has to answer the committee’s questions, and eventually Democrats Sheila Jackson Lee and David Cicilline interrupted the hearing as well.

“Mr. Chairman is it not appropriate to also interject the attorney client privilege which cannot be overridden?” Jackson Lee declared, citing the FBI counseling Strzok not to answer questions.

“Point of parliamentary inquiry!” Cicilline shouted out as Goodlatte finally tried to allow Gowdy to finish his questioning.

The hearing continued in chaos as Democrats continued to ask for points of order and Goodlatte struggled to retain order.

Strzok refused to answer House Freedom Caucus co-founder Jim Jordan regarding which individuals gave the FBI three copies of the Trump dossier, claiming the FBI will not allow him to divulge his sources. Jordan was tireless in going after him. Again, the Daily Caller laid out the exchange and you can find that here.

I was disgusted by this spectacle today. It left me wondering if we are indeed headed for a civil war. The Democrats don’t want justice. They hate Trump and want him gone so they can be in power. That’s the attitude of dictators, fascists, Marxists, communists and totalitarians throughout history. Every Democrat that applauded Strzok, held up signs, interrupted the proceedings or was out of order should have been booted from that hearing. Strzok should have been held in contempt. Now that Lisa Page has heard his testimony, she will testify tomorrow in private. This is not justice… this is theater and it looks like it may turn violent. If we don’t stand up for our rights and to communists like this during hearings, we could lose all the freedoms we have fought for and fast. Today was a lesson in how not to battle your enemy on the floor.