President Trump broke his campaign promise to pro-lifers when he nominated Judge Brett Kavanaugh to the Supreme Court. Ricardo Davis of Georgia Right to Life calls Kavanaugh’s pro-abortion position “morally reprehensible” and urges pro-lifers and conservatives to demand Kavanaugh’s withdrawal and for Trump to replace him with a real pro-life nominee such as Amy Coney Barrett. 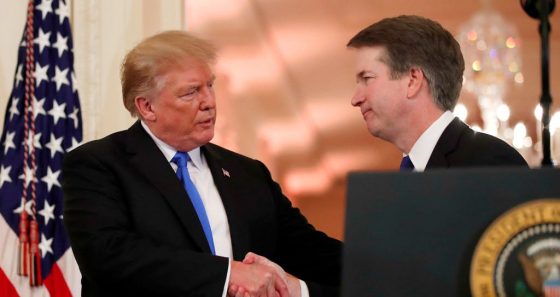 1) Contrary to his pledge during the presidential debates, appointing judges that will overturn Roe v. Wade is not a top priority for President Trump — or at least not right now. Kavanaugh could very well pleasantly surprise us and be such a vote. Provided the pro-life movement puts a credible challenge to Roe before the Court, which it hasn’t done since Casey a quarter century ago. However, it’s guess-work either way. Amy Barrett, on the other hand, was a moral certitude to be such a vote (which is why the base wanted her). Kavanaugh, like his predecessor Anthony Kennedy (whom Kavanaugh used to clerk for) is a risk appointment for conservatives. Not necessarily a risk to be another Kennedy, as much as a risk to not turn out to be the game-changing upgrade we were hoping for. Think more John Roberts than Antonin Scalia.

2) President Trump is not interested in a prolonged ideological battle with Democrats, like Barrett would’ve ignited for months. Trump is much more comfortable with political guerrilla warfare. Like riffing at his rallies to fawning crowds, or condemning low-lying fruit like NFL kneelers and media hacktavists most of America already loathes. But here, for the first time in his presidency, he was presented the chance to truly go to war with the Left on something that really matters and determines the future, and there’s no way to spin it. He punted. Even in an election year when energizing his base, while triggering the alt-Left to public insanity, would’ve clearly helped him — he punted. Remember this missed opportunity later, should Democrats capture the House this fall and mire the president in impeachment next year.

3) The opinions of the conservative legal community, which loves Kavanaugh, matter greatly to Trump. While that’s inarguably better than anything that would’ve come from a President Hillary or any other Democrat, it also means you’re less likely to get choices that will push back on bad precedents like Roe, Kelo, etc. once on the High Court. Because this is pretty much what we see from these folks on the federal bench, too. They’re usually pretty good against new bad stuff, no threat at all against the old bad stuff. Kavanaugh is the consummate beltway legal beagle insider. He’s pretty much the same kind of pick you would’ve gotten from a Jeb Bush or any other conventional Republican had they won the presidency. He’s Team GOP, not MAGA.

Though conservative fundraising groups will send out their hosanna emails claiming otherwise, which they would’ve done had the president nominated a yellow dog, and Democrat groups will claim he’s a modern-day Moses come to re-impose Leviticus, this is all just political theater that will now be ignored out here in the cheap seats.

This is not a pick that will inspire the base to do anything other than yawn, and return to their summer. In 48 hours, he’ll largely be forgotten by most voters until his formal confirmation process begins.

It does Trump no harm, but not much good, either. Since Kavanaugh is likely to give the typical canned answers we’ve come to expect from GOP judicial nominees at confirmation hearings, he won’t have a chance to do anything that potentially pleases Trump’s base until after the midterm elections are over. Which he very well may do, but he won’t be doing it in time to alter the trajectory of the 2018 elections.

This is a political single that drives in a run, but it could’ve been a walk-off homer.