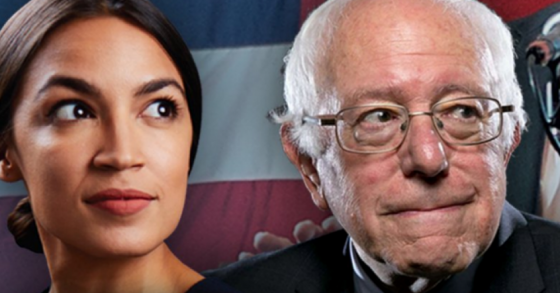 Just as I predicted, Alexandria Ocasio-Cortez, fresh off her win in New York against Democratic incumbent Rep. Joseph Crowley, has hit the campaign trail with big name leftists. This time it’s in Kansas with Bolshevik Bernie Sanders. It’s a socialist dream come true. Ocasio-Cortez may not be able to tell you the difference between socialists and Democratic Socialists of America (there really is none), and she may be math challenged when nonsensically dissing Trump’s low unemployment rate, but she’s got her socialist creds in with Bernie.

No one knew who Ocasio-Cortez was a few weeks ago. Now, she’s the fresh, young, communist millennial face of the Democratic Party. From bartender to brunette Evita… a Marxist Cinderella is born. On one hand, you have a cult-of-personality geriatric figure such as Bernie Sanders, born in 1941, and on the other, you have the telegenic and propagandic Ocasio-Cortez, born in 1989. Quite the spring/winter pairing there. “This week, I am traveling to Kansas with Alexandria Ocasio-Cortez to rally in support of James Thompson’s and Brett Welder’s campaigns for Congress — two great progressive candidates who will prove our message can win anywhere,” Sen. Bernie Sanders wrote in an email to supporters. Hopefully not… Kansas is conservative Trump country, I hope it still is.

Sanders waxed socialist in his email:

If Democrats want to win elections up and down the ballot in 2018, 2020 and beyond, we have to run progressive candidates like Alexandria Ocasio-Cortez everywhere, even in states Donald Trump and the Republicans won in 2016.

Because the issues Alexandria campaigned on — Medicare for all, a $15/hour living wage, free college tuition at public colleges and universities, fighting climate change and promoting racial, social and environmental justice — are not just popular in Vermont, Queens and the Bronx, they are popular everywhere. At a time of massive income and wealth inequality, and when real wages for ordinary workers continue to decline, these are the issues working families feel strongly about.

In a statement, Sanders said, “All across this country people understand that we need a government that represents all of us, and not just billionaire campaign contributors. We need to raise the minimum wage to a living wage, we need health care for all, we need to make public colleges and universities tuition-free and we need to rebuild our crumbling infrastructure. These are popular ideas in Vermont, in the Bronx, in Kansas and in every state in the country. Candidates who run on a progressive agenda can and will win.”

Ocasio-Cortez followed by saying, “The political revolution is alive and well in Kansas. James Thompson and Brent Welder know that policies like Medicare for All, Tuition-free College and Trade School, and a living wage can win across the country — including the Midwest. They have committed the organizing power to show that if Democrats run on a clear, committed platform for working class Americans, while rejecting dark money, we can win. I am proud to join Senator Sanders to let voters in Kansas know they have this option here at home.”

Then came the obligatory asking for money… they always do. Bernie is struggling with the rest of us you know. It’s a burden having to care for three homes and never work a day in your life. America can relate… not. No doubt, Ocasio-Cortez, who paints herself as one with the working class, but who in reality isn’t, will soon get her own lakefront mansion, so she can suffer in luxury, like all good socialist elitists do.

Progressives smell blood in the political waters of Kansas these days:

But Ocasio-Cortez and Sanders have more expansive aims than turning the 3rd [Congressional District] blue. They want to prove their theory of the progressive case.

On Friday, they will rally for Brent Welder, a former labor lawyer running on a platform of “Medicare for All,” a $15 an hour minimum wage, tuition-free public college, and reducing big money’s influence in politics. “Brent can win, he can win,” Ocasio-Cortez said on The Dig, a podcast from Jacobin magazine. “And he can not only win his primary, but he can win in a red-to-blue district on a progressive vision. And I think that’s so exciting.”

Kansas holds a special place in the hearts of progressives, and running and winning there on an unapologetic platform has long been a goal. The love affair goes back to “bleeding Kansas,” when abolitionists such as John Brown moved west to Kansas to do battle with slave owners in an effort to turn Kansas into a free state. The bloodshed there was a forerunner to the Civil War. Later, Democrats running as prairie populists dominated the state. Modern progressivism could be said to date to a speech delivered by Teddy Roosevelt in 1910 in Osawatomie, Kansas. Just over a century later, Barack Obama returned there at the height of the Occupy Wall Street protests to deliver his own version.

Hello Kansas? You have socialists in your midst.

For the socialists to overcome though they’ll have to get past EMILY’s List first. It’s a commie face-off. Last week, the group’s Super PAC Women Vote! dropped $400,000 on an ad to support Sharice Davids, a lesbian, Native American, amateur mixed martial arts fighter who was a fellow in the Obama administration. The ad plays on Davids’ MMA background: “She never backs down; not in the ring, not to the NRA, or Trump and the Republicans in Washington. … She’s fierce, she’s progressive, and she’s a fighter.” This will get bloody. Hopefully, the conservative candidates will let them beat each other to a pulp and step over them to win the race.

Ocasio-Cortez is a political climber. There are whispers in the Democratic Party that Bernie Sanders will run again with her as his vice presidential running mate. But make no mistake, Ocasio-Cortez wants to be president herself and makes no bones about it. Her proud mom told the New York Post, “Her aspiration is to be the president.”

This is their schedule for tomorrow in Kansas:

Tickets are sold out for the events. I would go anyway. Kansas, you need to take a stand against these socialists and vote in those on the Republicans ticket. Your freedom is at stake here… don’t answer the siren call of freebies and the lying utopia of socialism.

6 thoughts on “Socialists Unite! Bolshevik Bernie And Ocasio-Cortez Campaign Together In Kansas”