Have you just gotten into firearms and are thinking about concealed carry? Or maybe you’ve been interested in firearms for a while but are looking to purchase another pistol to conceal carry? We’ve done the research and selected the 8 best concealed carry guns anyone can buy. While everyone has slightly different preferences for the gun they choose to conceal carry, most people can probably agree on this list we’ve compiled.

If you’re a smaller female and you want a smaller gun that’s easier to conceal, we’ve got you covered. But if you’re not worried about concealing a slightly larger gun and want one that’s easier for you to handle, we’ve got that too.

We’ve included 9mm and .45 pistols (the most common calibers for concealed carry) as well as one .380 pistol in case you’re looking for something a little bit smaller and one 40 S&W pistol in case you want an excellent magazine capacity without compromising in concealability. No matter if you prefer 9mm as most women do or a .45 as most men do, we have it all.

Depending on the features and characteristics you’re looking for, we’ve got them all and organized the list in terms of size, ranging from smaller pistols to larger pistols. 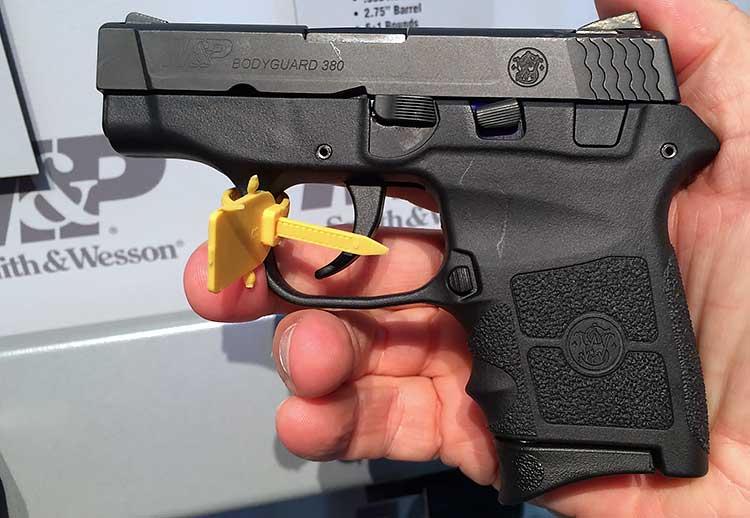 Why It’s Cool: At such a small size, the M&P Bodyguard 380 is very concealable and ideal for a smaller individual or someone who doesn’t want a very heavy gun.

If you’re looking for a very small concealed carry pistol, the M&P Bodyguard 380 could be a great option for you. Even when it’s loaded, it weighs less than a pound! Although the capacity can’t compare with a larger gun, it still has a 6+1 capacity.

Because it is so small and lightweight, it’s easy to conceal. Depending on the user, it might be more difficult to operate. Its small size makes it a bit challenging and finicky to fire. But some individuals like smaller females may prefer that it is easier to conceal because .380 ammo still can get the job done, especially given shot placement. .380 ammo is just one step down from 9mm (see this helpful handgun caliber guide), and a smaller round has less recoil, which theoretically means you can shoot more accurately and hit the target more.

Even if you’re not a smaller female, the Bodyguard 380 still could be a great option for you in the hot, sweaty summer months when you don’t want to be dragging around a much heavier gun. Some men also like the Bodyguard as a back-up gun.

As is no surprise given that it is a smaller firearm, the size of the grip can take some time to get used to; there isn’t much room for your hand! Additionally, the Bodyguard has a Double Action Only (DAO) trigger, meaning that it is a long trigger pull. Given this fact, it really isn’t designed for far-away target shooting, as the larger trigger pull can cause you to move the gun while firing, which isn’t a big deal a couple feet away, but would be a miss at 25 feet.

Given its lower cost, decent features, and ease in concealing with almost any attire, the Bodyguard is a great option for those who haven’t carried before or those who want a back up gun or something lighter for the summer.