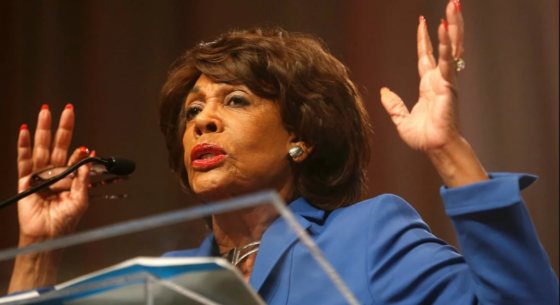 Wacky Congresswoman Maxine Waters is at it again. This time, she’s taken to the pulpit at the First African Methodist Episcopal Church in Los Angeles. Waters is on a mission from God! She gave a screeching hot sermon on the evils of President Trump and declared much to the delight of those in the congregation that she is “in this fight” against the president. I thought the left was opposed to politics from the pulpit? Oh, that’s right… only when Republicans do it. My bad. It’s a pity that she wasn’t struck by holy lightning over her hate-filled Trump thumping.

For fourteen long minutes, Waters delivered a holy roller political diatribe. She slammed Trump and his administration for just about all of the unverified allegations leftists have made against him for two years. Every talking point, every lie, every smear she could think of, Waters threw out there to the faithful. “We never dreamed we’d have someone in the White House who was divisive, who could not tell the truth, and who was intent on not making America great again, but taking America down!” she said. Well, I’m betting that Jesus never dreamed that the most corrupt politico in Congress would dare give a sermon such as this bearing false witness against a sitting President of the United States. Life’s just full of surprises.

“I will not sit quietly and allow the President of the United States, or anybody else, to undo all that’s been done,” she snarled. “And ladies and gentlemen, I am in this fight!” she announced, to enthusiastic applause. She “will not shut up,” she promised and she will not cower before the president’s and his allies’ intimidation. How noble… not. Because none of it is true. Not even a little bit. Shame on that church and those attending. They have made a mockery of their faith by doing such things.

From The American Mirror:

Unsurprisingly, the focus of Waters’ rant was Trump’s seditious collusion with Russia… that never happened. “Russia elected this president!” Waters declared. She thinks that Trump meeting privately with Putin is evidence of him trying to destroy America. Though the private meeting between the two world leaders is exactly like every other private meeting between heads of state, she accused Trump of trying to hide something. “That’s not right!” she said. I’m not keen on Trump being chummy with a monster like Putin, but he has to meet with the man or go to war with him. The left is blowing this totally out of proportion. Waters claims that Trump embarrassed us on the world stage. She claimed he didn’t even know what NATO means. The congregation laughed and applauded like the useful idiots they are.

Waters went on to state that Trump was considering pardoning Paul Manafort, while “we have people going to jail everyday for stealing a piece of gum.” Ah yes, the communist movement to empty the prisons raises its head at church. She also sang the praises of Obamacare, which she framed as particularly important to the African American community. She ended her railing by calling on the congregants to “engage” in the political fight. “I want you to engage. I want you on the social media, I want you on the telephone,” she commanded the congregation.

“Most of all, we’ve got to talk about the children!” she said, saying Trump is still “separating children from their parents.” And then she threw the slavery card over the temporary separation of children from their illegal immigrant parents or guardians. She compared Republicans to slave-owners separating slave families. Yeah, she went there. In response, members of the congregation decried the administration’s actions as “evil” and “horrible.” Which is what Waters was aiming for. Those in a much warmer climate applauded her efforts as well, especially the father of all lies.

Waters ended her remarks by claiming God had sent her on her mission against Trump. “You’ve gotta know that I’m here to do the work that I was sent to do, and as pastor said to me when I came in this morning, when God sends you to do something, you just do it! So I have a message I’m going back to Washington tomorrow morning, I’m going to tell them pastor told me to come here and just do it!” Then she got a big ole hug from the pastor for her performance amid wild applause. We don’t seem to worship the same God… just sayin’.

So, Waters is rallying the African American community from the pulpit, the streets and from her soap box. She’s inciting violence against the right and her pastor is cool with that. She pushes hatred of the president and Republicans and the faithful cheer and applaud. That’s a church I would never attend and their faux Christianity is something I abhor. When racists and communists pretend to be people of faith it should concern and enrage all of us… bloody wars and deadly riots are started in such ways.