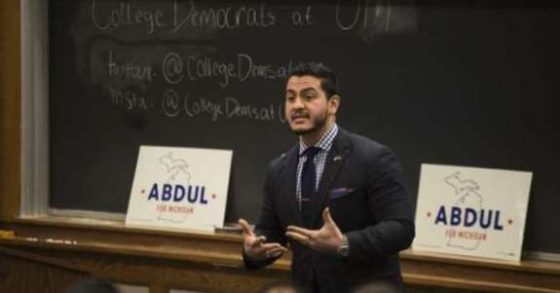 Our friend Philip Haney, retired DHS terrorist investigator, is on a mission to help the voters of Michigan understand Political Islam and its potential impact on the outcome of the August 7th Michigan Primary election.

Because Michigan’s history has produced the perfect storm where an extreme Leftist Democrat, who is also a Sharia-compliant Muslim, could become the next Governor of the Wolverine State. His name is Abdulrahman Mohamed El-Sayed and he can win and accelerate the Balkanization of America.

Philip Haney says his oath “to preserve and protect America from all enemies foreign and domestic” is still on active duty. Haney’s goal is to wake up sleeping citizens so they come to understand the enemies within, so that they exercise their right to vote to preserve our sovereignty.

Haney has been in Michigan since the beginning of June and will remain in the state through the August 7thPrimary. He has participated in national webinars showcasing the only candidate for Governor brave enough to stand against Sharia – the Islamic Law that is complied with every day in Michigan by thousands of Muslim residents who have immigrated and produced 2nd and 3rd generations of mosque-attending Sharia-compliant residents. That candidate, says Haney, is Republican Patrick Colbeck.

Why is Abdulrahman Mohamed El Sayed such a threat to constitutional liberty?

As Michigan’s star conservative commentator Jen Kuznicki documented, El Sayed was born in 1984 in Detroit to parents who immigrated from Egypt to America in the 1970’s.

El Sayed holds dual Egyptian and American citizenship. According to interviews, El Sayed stated that his father left Egypt because he felt he was unable to practice his religion properly in Egypt, meaning secular Egypt was not “Islamic” enough for him.

The couple immigrated in what is known as the third wave of immigration to Detroit from the Middle East, and the father, an engineer, eventually worked for GM, and is a part-time Imam.

El Sayed attended the University of Michigan and received a B.S. in political science and biology. He then attained a doctorate in philosophy from Oxford University while simultaneously earning a medical degree from Columbia University. The funding for the latter was provided the Soros Fellowship for New Americans, which is run by the brother of the infamous George Soros, Paul, and is awarded to immigrant children for postgraduate study. He is also a Rhodes Scholar.

It is also worth noting that during his college days Abdulrahman Mohamed El Sayed was a leader in the Muslim Students Association; the same Muslim Brotherhood front organization that recruited radical Islamist Egyptian President Mohamed Morsi while he was a student at the University of Southern California.

El Sayed’s chosen field after all of that education is “social epidemiology.”  Social epidemiology is not a scientific medical field, it is a social justice field of research and abstract theory.

In fact, wrote Kuznicki, the International Journal of Epidemiology scoffs at social epidemiology, saying “Stretching borders between epidemiology as a biomedical discipline and sociology only leads to trivial statements, useless for society.”

Which means, he’s a hardcore leftist.

This is important so that the potential voter can grasp that Abdul’s schooling, funded by a Soros group, quite probably was directed for a life in the pursuit of politically leftist social policy.

In other words, if you think El Sayed has been groomed, it definitely looks like it, says Kuznicki, especially given the fact that one of his first degrees was in political science, and his last was in abstract social justice theory, in an area of science denied by its field of medicine.

And “social justice” is certainly what Abdulrahman Mohamed El Sayed’s campaign for Governor of Michigan is all about.

El Sayed wishes to make Michigan a sanctuary state for all “undocumented” immigrants.

El Sayed supports the movement for a “living wage” and is a full-throated supporter of a $15 minimum wage.

El Sayed wants to direct federal money to specific cities in Michigan to replace water pipes even though this responsibility lies with the cities themselves.

El Sayed claims he is a man of the people who has to fight government for basic human rights.

El Sayed is pro-abortion, a strange position for a practicing, devout, Muslim.

El Sayed admits that his political positions if instituted would be extremely costly, thus he wishes to reexamine Michigan’s tax code and change it from a flat tax to a graduated tax system, which means, the more you make, the more government takes.

To summarize Jen Kuznicki’s research into Abdulrahman Mohamed El Sayed’s politics, he represents a text book example of the Red – Green Axis of the hard Left and Muslim Brotherhood-style Sharia-supremacist Islamist. (You can read Jen Kuznicki’s complete article, and it well worth the time, through this link.)

And El Sayed’s Muslim Brotherhood associations aren’t imaginary, as many Democrats and head-in-the-sand Republicans would have Michigan voters believe.

Which brings us back to why our good friend Phil Haney is in Michigan.

Whether the topic is Abolish ICE or Sharia-sanctioned crime like Female Genital Mutilation, rape or honor killing, Philip can move an audience to rise about the tactics of an election cycle and focus on the highest priority of all, the continuation of our sovereign nation.

Philip has met with dozens of groups, large and small, spoken to national audiences about the dire situation in Michigan and invited Bible students to remember the source of our sovereignty and our responsibility to preserve it.

Haney says this campaign is all about Sovereignty – the nation, the state, the individual. There are those who are working diligently to “to alter or abolish” the current form of government. The Left and the Muslim Brotherhood for different reasons and with different tactics have the same goal – a world without the Constitutional Republic known as America.

We urge our conservative Democrat friends in Michigan, and there are many conservative Christian and Catholic Democrats in Michigan, to take Philip Haney’s warning of the danger of Abdulrahman Mohamed El Sayed’s candidacy seriously and to choose another candidate in the August 7 Democratic Primary.

We also urge CHQ readers to forward this informative article to all of their family, friends and contacts in Michigan so they can act upon this information when they vote in the August 7 Michigan Primary Election.