London – The Moscow lawyer said to have promised Donald Trump’s presidential campaign dirt on his Democratic opponent worked more closely with senior Russian government officials than she previously let on, according to documents reviewed by The Associated Press.

Scores of emails, transcripts and legal documents paint a portrait of Natalia Veselnitskaya as a well-connected attorney who served as a ghostwriter for top Russian government lawyers and received assistance from senior Interior Ministry personnel in a case involving a key client. 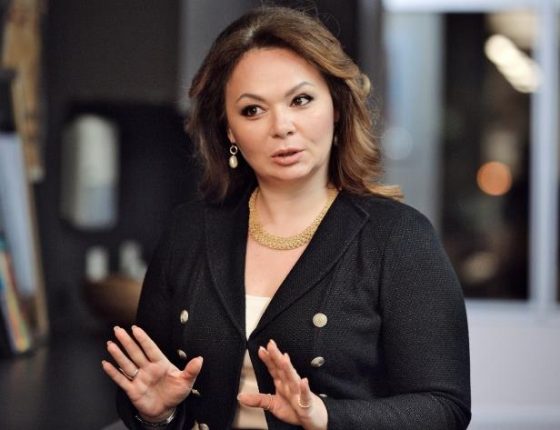 The data was obtained through Russian opposition figure Mikhail Khodorkovsky’s London-based investigative unit, the Dossier Center, that is compiling profiles of Russians it accuses of benefiting from corruption. The data was later shared with journalists at the AP, the Swiss newspaper Tages-Anzeiger, Greek news website Inside Story and others.

Veselnitskaya has denied acting on behalf of Russian officialdom when she met with the Trump team, telling Congress that she operates “independently of any government bodies.”

But recent reporting has cast doubt on her story. In an April interview with NBC News, Veselnitskaya acknowledged acting as an “informant” for the Russian government after being confronted with an earlier batch of emails obtained through the Dossier Center.

Meanwhile, Putin carries through on those comments he made during the press conference with President Trump. More details below.

So help me understand this, the Russian government considers it a crime to be involved in the creation of the Magnitsky Act? So they will indict @BarackObama too, since he signed it into law? Surely, even Putin’s regime is not that crazy. Can Russian speakers help clarify? https://t.co/FJGN23IJhZ

Russian General Prosecutor’s Office spokesperson Kurennoi gives the details of the criminal case against US officials targeted in the new criminal case in retaliation to the Magnitsky Act and US court case against alleged Russian money launderers https://t.co/ConOrf80iJ

Translated: MOSCOW, July 17 – RIA Novosti. The Prosecutor General’s Office of the Russian Federation on Tuesday announced the names of American citizens who need to be interrogated in the case of the head of the Hermitage Capital foundation, William Browder, convicted in Russia. Among them, the head of the Office of the Prosecutor General’s Office, Alexander Kurennoy, called the former US Ambassador to Russia Michael McFaul, several US intelligence personnel, two ex-assistants to the US Secretary of State, US financiers of the Siff brothers. The list also included an agent of the British Mi-6 Christopher Steel.

These names were announced by the Russian Prosecutor General’s Office the day after the Russia-US summit in Helsinki, where Russian President Vladimir Putin at a press conference asked US investigators to make inquiries to Russia for questioning 12 alleged Russian intelligence agents, “and maybe even come to Russia for survey.” At the same time, the Russian president stressed that then the American side expects similar steps on the principle of reciprocity: in response, the Russian side will wait that in the US in the presence of Russian investigators will question those individuals, including representatives of the US special services, whom Moscow suspects of committing crimes in the territory of the Russian Federation.

Earlier, Deputy Attorney General Rod Rosenstein said that the US Justice Department put forward new charges against 12 Russians allegedly working for the GRU in the framework of the investigation conducted by the special prosecutor Robert Muller on the imputed Russian interference in the elections in the US.

Representatives of the State Department and special services

“We are ready to send another request to the US asking them to interrogate these people, as well as other employees of American special services, a number of state employees and entrepreneurs,” the head of the Office of the Prosecutor General’s Office, Alexander Kurennoy, told reporters.

Among American officials, whom Russia would like to interrogate in the case of the head of the Hermitage Capital foundation William Browder, Kurennoy called the former US ambassador to Russia Michael McFaul. He noted that under the leadership of McFaul “in 2009-2010, compiled a memorandum to the US State Department from Moscow on the progress of the investigation in the Magnitsky case.”

“These are the employees of the US National Security Agency Todd Hyman, he signed an oath to the US court on Browder’s words, Svetlana Engert – took the stolen materials of the criminal case from Russia, Alexander Shvartsman, took care of Browder during his stay in the US Jim Root, CIA agent, the financial manager of Browder,” – said Kurennoy.

The list includes two former assistants to the US Secretary of State, David Kramer and Jonathan Wiener, and Robert Otto, “until January 2017 – deputy head of the intelligence department of the US State Department, headed the Bureau of Intelligence and Research of the US Department of State on Russian domestic policy in the department for Russia and Eurasia.” In addition, the RF GP would like to interrogate and who was in 2009 an employee of the US Helsinki Commission Kayla Parker.

Kurennoy explained that the Prosecutor General’s Office wants to question the employees of the US special services who swore false allegations against businessman Denis Katsyv and guarded the head of the Hermitage Capital William Browder, convicted in the Russian Federation.

“As part of the investigation of one of the criminal cases against Browder, which continues to be investigated by the investigative authorities in Russia, and his criminal group, we are ready to send another request to our American colleagues in order to question these officers of the US intelligence services, a number of government employees, entrepreneurs and other persons involved to the illegal activities of Browder. All that I said above, we can confirm the documents, and if colleagues from the US will turn to us for relevant information, then we are within the framework of the international legal cooperation are ready to provide the necessary assistance and assistance, but I will emphasize on a parity basis, and not unilaterally,” Kurennoy said.

He added that they refer to those employees of the US special services who participated in the formation of false evidence of the guilt of the “citizen of Russia” in the US legal proceedings against Prevezon and took care of convicted businessman Browder.

“They are recipients of illegal incomes, the Ziff brothers themselves, long-term partners in the criminal business of Browder,” Kurennoy said, referring to people whom he would like to interrogate the RF State Duma.

Among those whom the Russian General Prosecutor’s Office would like to interrogate before the Browder case, not only US citizens, but also an employee of the British special service Mi-6 Christopher Steel.

“By the way, we have questions not only for US citizens, but I would also like to mention the employees of the special services of other countries who interacted with the people I mentioned earlier, for example, I would like to talk with Christopher Steele, an agent of the British Mi-6. For a long period of time, he had contacts with a group of lobbyists of the “Magnitsky Act” and, interestingly, it was through this person that the very investigation of the special prosecutor (Robert) Müller, who is known as “Trump Dossier”, was initiated.

Kurennoy also said that the criminal group Browder had withdrawn from Russia over 1.5 billion US dollars, of which about 400 thousand dollars, and not 400 million, as it was said earlier, fell on the accounts of the US Democratic Party.

“Browder’s criminal group with the help of offshore schemes withdrew money and shares from the Russian Federation for a total of more than $ 1.5 billion, of which $ 400,000 were transferred to the accounts of the Democratic Party,” he said.

Russian President Vladimir Putin said at a news conference on Monday after talks with US President Donald Trump in Helsinki that Browder’s business partners illegally earned more than $ 1.5 billion in Russia and sent $ 400 million to Hillary Clinton’s election campaign.

“Later, the president asked us to correct his reservation, which he made yesterday, not 400 million, but 400,000, but that’s quite a huge sum,” he said.

Browder is an international financier and investor, a former employer of the auditor Sergei Magnitsky. In 1995-2007, Browder was the largest foreign portfolio investor in Russia, now lives in London, Russia is declared an international wanted list.

In 2013, Browder was convicted in Russia for tax fraud. The court found that Magnitsky in the interests of Browder in 1997-2002 implemented an illegal scheme of tax evasion, using companies registered in Kalmykia and managed by Hermitage Capital. He is not going to return to Russia, so the verdict is in absentia – the opportunity to execute it will appear only if Browder is in Russia.

At the end of 2017, the Tverskoi Court of Moscow found Browder guilty of tax evasion and the bankruptcy of the Dalny Steppe enterprise, but did not tighten the sentence at the age of nine that was obtained under the previous sentence.