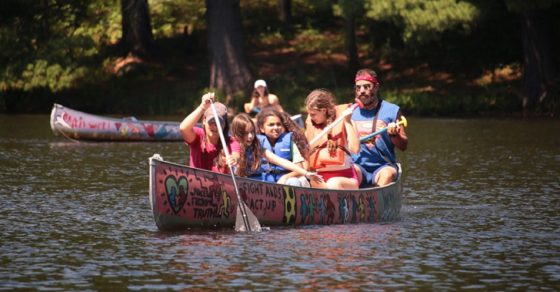 Mark Bray, a Dartmouth scholar who wrote “The Anti-Fascist Handbook,” posted “super rad” photos from the camp on his Twitter feed; his book notably included in the photos:

Camp Kinderland is a “multicultural summer camp and community that honors our progressive secular Jewish roots through our commitment to economic, racial, and social justice.” That’s according to its mission statement. “Kinderland’s summer programming and year around activities integrate progressive values with arts, recreation, and activism in a compassionate and caring environment.” It is brainwashing in every sense of the word and it is literally the left’s version of the Hitler Youth. In my book, it is communist militarism for children and is child abuse. It’s not summer camp, it’s a revolutionary camp.

Campers were “attacking me for my political views and just saying that they would feel threatened with me as their counselor,” Mamet said. “They were saying that they felt threatened by me as a counselor and not knowing my views on gun control … they said to my face all Trump supporters are bad people. They’re racist, homophobic and we don’t want them at our camp.” I’m surprised this girl was not physically attacked. That is potentially a very dangerous environment. Under the guise of feeling ‘threatened’, people have killed for much less.

After TheDCNF wrote their article on July 20th, the staff had a meeting where they proudly displayed almost 50 Antifa flags campers had designed. The staffers were told not to use social media at the meeting. Gee, I wonder why? Campers also participated in an event called the “Peace Olympics.” There are “five teams and every team gets an issue and my particular team was Black Lives Matter,” Gabriella stated. “We would have to make chants about Black Lives Matter and chants in favor of that particular thing. … Some of the chants they made were attacking Trump. ‘No more Trump, no more Pence. We don’t need a bigger fence.’”

Campers “were justifying the police officers being shot [in Ferguson],” Gabriella said. Her father is a police officer. “They were basically saying that it was okay for the police officers to be shot because people were so angry.” That leads to killing anyone you don’t agree with or those who make you angry. She was going to switch bunks and instead resigned instead because she felt threatened there. I don’t doubt that she did. This is the hatred the left is instilling in their children and it won’t end well.

“The program director came and talked to the campers about why I was moving and I wanted it to be clear that I was moving because the way they were treating me. But the program director told the campers it was just because I was needed somewhere else,” Mamet said. “They weren’t doing anything to hold [the campers] accountable because they were obviously just trying to keep their money.” Of course, Camp Kinderland of course would not comment on this turn of events. Good for The Daily Caller on exposing them. It should be aired everywhere possible. And if they are doing this at summer camp… just think what they are doing in your children’s classrooms.