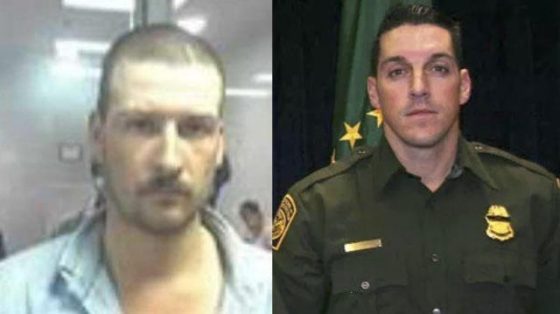 SAN DIEGO, CA – Heraclio Osorio-Arellanes, who is charged with the first-degree murder of U.nited S.tates Border Patrol Agent Brian Terry, was extradited from Mexico to the United States today, announced Attorney General Jeff Sessions and Southern District of California U.S. Attorney Adam Braverman for the Southern District of California.  He will be arraigned in U.nited S.tates District Court in, Tucson, Arizona, Wednesday tomorrow afternoon.  Osorio-Arellanes has been in custody awaiting extradition since his arrest by Mexican authorities on April 12, 2017.

Agent Terry was fatally shot on Dec.ember 14, 2010, when he and other U.S. Border Patrol agents encountered Osorio-Arellanes and four other members of a “rip crew” (a criminal gang that attempts to steal from drug and alien smugglers) operating in a rural area north of Nogales, Arizona.  Of the six defendants charged along with Osorio-Arellanes in the case, three have pleaded guilty, two were convicted following a jury trial, and one other defendant – Jesus Rosario Favela Astorga (arrested by Mexican authorities in October, 2017) – has not yet been tried. is pending extradition to the United States.

“The Department of Justice is pleased that the suspected killer of Border Patrol Agent Brian Terry has been successfully extradited to the United States and will now face justice for this terrible crime,” said Attorney General Jeff Sessions. “We are grateful for the efforts of the Federal Bureau of Investigation, U.S. Marshals Service and U.S. Customs and Border Protection as well as our law enforcement partners in Mexico. To anyone who would take the life of an American citizen, in particular an American law enforcement officer, this action sends a clear message: Working closely with our international partners, we will hunt you down, we will find you, and we will bring you to justice.”

“The arrest and extradition of Osorio-Arellanes reflects the steadfast commitment and tireless work of the United States and our law enforcement partners in Mexico, who shared the common goal of seeking justice for the murder of Agent Brian Terry,” said U.nited S.tates Attorney Adam Braverman.  “When an agent makes the ultimate sacrifice while serving his country, we must hold all the individuals who played a part in this tragic outcome accountable for their actions.  This extradition moves that important goal forward.”

The indictment charges the defendants with first-degree murder, second-degree murder, conspiracy to interfere with commerce by robbery, attempted interference with commerce by robbery, use and carrying a firearm during a crime of violence and assault on a federal officer.  In addition to the murder of Agent Terry, the indictment alleges that the defendants assaulted U.S. Border Patrol Agents William Castano, Gabriel Fragoza and Timothy Keller, who were with Agent Terry during the firefight with the “rip crew.”

This case is being prosecuted in federal court in Tucson by attorneys from the Southern District of California, Special Attorneys Todd W. Robinson and David D. Leshner.  The U.S. Attorney’s Office for the District of Arizona is recused.  The case is being investigated by the FBI.  The Government of Mexico assisted in the apprehension and extradition.  The Justice Department’s Office of International Affairs provided assistance with the extradition of defendant Osorio-Arellanes.

The public is reminded that an indictment is a formal charging document and defendants are presumed innocent until the government meets its burden in court of proving guilt beyond a reasonable doubt.

Federal authorities said Tuesday that Heraclio Osorio-Arellanes will be arraigned in U.S. District Court in Tucson on Wednesday.

Osorio-Arellanes had been in custody awaiting extradition since being arrested by Mexican authorities on April 12, 2017. Osorio-Arellanes is charged in the death of Border Patrol Agent Brian Terry, who was shot and killed Dec. 14, 2010 when he and other agents encountered a gang preying on smugglers north of Nogales, Arizona.

Terry was part of a four-man team in an elite Border Patrol unit staking out the southern Arizona desert on a mission to find “rip-off” crew members who rob drug smugglers.

They encountered a five-man group of suspected marijuana bandits and identified themselves as police in trying to arrest them.

A jury in Tucson in October 2015 found two men, Jesus Leonel Sanchez-Meza and Ivan Soto-Barraza, guilty on murder and other charges. Another man, Manual Osorio-Arellanes, pleaded guilty to murder and was sentenced to 30 years in prison in 2014.

A fourth man, Rosario Rafael Burboa-Alvarez, pleaded guilty to murder. He was not present during the shooting but is accused of assembling the rip crew.