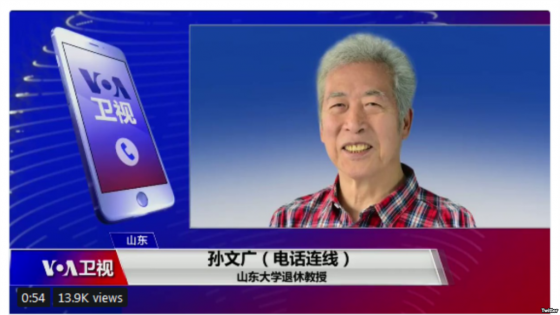 According to the Washington Examiner, Sun penned an open letter criticizing Xi’s plan to expand infrastructure spending in Africa, following the autocrat’s recent trip to the continent. “What? Did I say something wrong?” the professor could be heard saying when the police entered his house, according to VOA. “Did you hear I say anything wrong? So many Chinese are still poor, and we shouldn’t throw our money in Africa.” VOA believes he is under house arrest, but there is no way to know right now. “Subsequent efforts by VOA to re-engage with him for this interview have been unsuccessful,” Serchak said.

VOA Mandarin has attempted to reach professor Wenguang Sun by cellphone and WeChat, a popular social media platform, since he was removed from his home during the Wednesday night broadcast. The professor, who lives in Jinan, the capital of eastern China’s Shandong province, has not responded. Sources in Shandong told VOA he was under house arrest.

“I am entitled to express my opinion. This is my freedom of speech,” were the professor’s last words heard on the show via telephone.

Yibing Feng, VOA’s correspondent in Beijing, called the Information Department of the Ministry of Foreign Affairs of China for comment, but the mobile phone open to the public was turned off, and the landline was not answered. Feng also contacted the Public Security Department of Shandong University and the Shanda Road Police Station of Jinan’s Public Security Bureau. Neither would comment.

While “professor Sun was on a live telephone interview from his home, he reported to the VOA anchor that local police had forcibly entered his residence and demanded he end the interview,” Serchak said in the statement. “When professor Sun refused, the phone line went dead on live television. Subsequent efforts by VOA to re-engage with him for this interview have been unsuccessful.”

On the show, Sun said, Xi “wants to make nice with African countries, and that’s not what we are against. But there are so many other things for him to take into account. China has got a huge population, and there are still so many people living in destitution. You need to consider your own economic capability when providing for others. If you don’t actually have the scale of capability to match up with the scale of things you are trying to do, just don’t do it.”

Sun also said on air, “There are so many people living in poverty in China. Some too poor to see a doctor, some too poor to have pensions after retirement, and some too poor to go to school. Under such circumstances, [if] you still choose to throw money at other countries, domestic backlash is almost guaranteed.”

This is the true face of communism and it is not pretty. This is where socialism leads every time… suppression of personal rights and expression. The only crime this retired Shandong University professor is guilty of is speaking his mind, which was just enough to get Xi’s secret police to brutally remove him from the public eye. His last words were, “At this moment, they are standing right at my door,” he said. “I am entitled to express my opinion. This is my freedom of speech!” Yes, it is, but the communist Chinese unfortunately don’t see it that way.