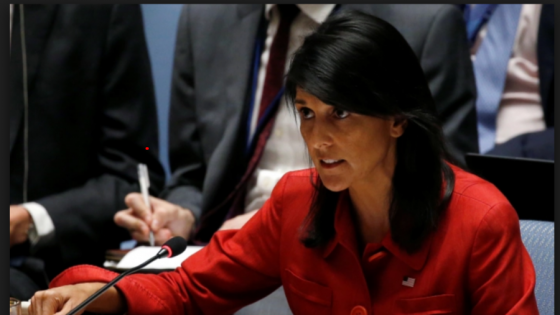 U.S. Ambassador to the United Nations Nikki Haley brought the heat when she slammed Putin yesterday over allowing thousands of North Korean laborers into Russia. It’s a direct violation of sanctions against Pyongyang. Her blistering criticism came just one day after the Wall Street Journal reported that Moscow granted thousands of new work permits to North Korean laborers.

“Credible reports of Russia violating U.N. Security Council resolutions on North Korean laborers working abroad are deeply troubling,” Haley stated. “These reports are especially concerning as they come just one month after Russia refused to acknowledge North Korea’s violations of the U.N. oil cap and blocked a United States request to enforce sanctions and put a stop to it.”

Haley’s rebuke came just hours after the Treasury Department sanctioned a Russian bank for violating sanctions against North Korea. They had knowingly authorized a large payment on behalf of a North Korean living in Moscow who was sanctioned by the U.S. last year. Just the day before Haley called Russia on the carpet, U.S. intelligence officials told reporters at the White House that the threat of Russian interference in the 2018 midterm election was real. American intel agencies are addressing the threat comprehensively, the officials said. In fact, several heads of our biggest intel agencies held a press conference to ring the alarm bells over the threat.

The sanctions against North Korea were aimed at getting them to relinquish their nuclear weapons program. Unfortunately, North Korea is still producing missiles and nuclear material despite the sanctions according to intelligence reports. Those sanctions will remain in place until there is full, provable denuclearization by the North Koreans, per President Trump. “Until we see the final, fully verified denuclearization of North Korea there can be no easing of sanctions,” Haley said. “Talk is cheap – Russia cannot support sanctions with their words in the Security Council only to violate them with their actions.”

This occurred on the same day that U.S. Secretary of State Mike Pompeo, less than two months after a landmark U.S.-North Korea summit in Singapore, flew back to the city-state and suggested that continued work on weapons programs by North Korea was inconsistent with its leader’s commitment to denuclearization.

Russia immediately cried foul and claimed that the work permits were issued before the sanctions were imposed on North Koreans already in the country. Alexander Matsegora, Russia’s ambassador to North Korea, said the laborers were allowed to work in Russia until Nov. 29, 2019, as their work contracts had been signed before sanctions came into force, Interfax reported. He stated that the 3,500 new work permits had been issued to workers who had signed contracts in Russia before Nov. 29, 2017. Labour Ministry records indicate that at least 700 new work permits have been issued to North Koreans in Russia this year. Over 10,000 new North Korean workers have registered in Russia since September according to the Wall Street Journal, citing records from Russia’s interior ministry.

The U.N. is now looking into potential violations of the sanctions. “It’s absolutely clear that Russia needs to do more. Russia says it wants better relations with the United States, so Moscow should prove that by cooperating with us, not working against us, on this urgent threat to all nations,” a U.S. State Department spokesperson told Reuters. “It is estimated that North Korean laborers in Russia send between $150-$300 million annually to Pyongyang. Now is the time for Russia to take action: Moscow should immediately and fully implement all the U.N. sanctions that it has signed on to.”

As North Korean laborers work like slaves abroad under grueling conditions, most of what they earn ends up in their communist leader’s coffers. The labor ban is a part of a broader set of sanctions that are aimed at eliminating an important revenue stream for North Korea. Initial restrictions in China and Russia, where about 80 percent of the North Korean laborers are working, seem to have loosened. “For a time, both Russia and China appeared to be expelling North Korean workers well before U.N. deadlines, but more recent reporting suggests that North Korea may have again begun to dispatch labor to both countries,” a report concluded.

The IPC was sanctioned by the U.S. Treasury Department in June 2017 over its trade with North Korea and in December 2017 the U.N. imposed its strictest limits on North Korean imports to date. In September of last year, Reuters found that at least eight North Korean ships left Russia with a cargo of fuel headed for their homeland despite declaring other destinations, a ploy that U.S. officials say is often used to undermine sanctions.

What is clear here is that North Korea is not following the rules. And just as has always been the case, both Russia and China are aiding and abetting their comrades’ lawless behavior.

2 thoughts on “Nikki Haley Brings The Heat To The U.N. And Slams Russia For Violating North Korean Sanctions”