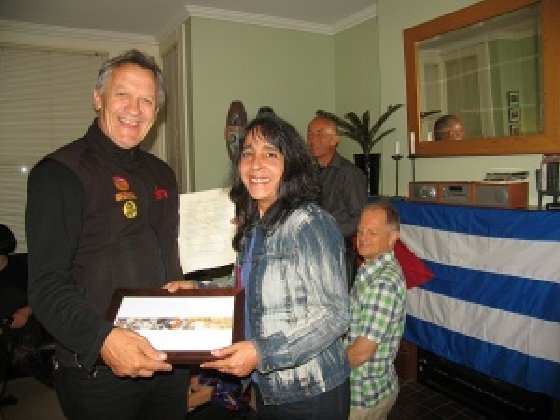 A New Zealand union official has been detained in Israel with 21 other activists after he took part in an illegal aid convoy to the Gaza Strip in Israel. This is the latest incident in a career of left-wing activism.

Far-Left Auckland-based “Unite Union” leader Mike Treen was arrested alongside other international campaigners on the ship Al Awda, which sailed under the Norwegian flag, on Monday, July 30. The union claims Treen was there on a peaceful mission and is working on his behalf to convince the New Zealand Government to intervene.

“Mike was taking part in a peaceful mission to deliver aid to Gaza and was in international waters when attacked and detained. We understand he has been taken, kidnapped in reality, to the southern Israeli port of Ashod,” says Unite Union’s National Secretary Gerard Hehir.

The Gaza Strip, a small parcel of land about twice the size of the District of Columbia, straddles Israel’s Southern border with Egypt. The territory has been ruled since 2007 by U.S. designated terrorist organization HAMAS. Israel has imposed a naval blockade on the Strip since 2007 after repeated rocket and terrorist attacks on Israel originating from Gaza.

The Embassy of Israel in New Zealand said in a statement regarding the arrests that the flotilla is a violation of international law and is “a cynical publicity stunt designed to divert the attention from the fact that HAMAS, with its brutal ruling of Gaza since 2007, invested in terror instead of the welfare of its people.” The Israeli military has explained that “[T]he naval blockade is a necessary and legal security blockade that has been repeatedly recognized by the world.”

Mike Treen’s participation was through an organization named Kia Ora Gaza, a New Zealand activist group which has sent several blockade runners to the area. One such trip included New Zealand Green Party Member of Parliament Marama Davidson, who was arrested by Israeli authorities in 2016.

When chosen to travel to Gaza, Treen told Kia Ora Gaza it is “a great honor to be asked to participate and a chance to deepen solidarity between workers in New Zealand and Palestine.” He continued:

“We need an international campaign to isolate apartheid Israel in the same way we did against Apartheid South Africa.”

Mike Treen has been a communist activist since he organized Auckland high school students to protest the Vietnam War. By the early 1970s he was active in the Socialist Action League, then the New Zealand affiliate of the Trotskyist 4th International. Treen rose through the ranks to become editor of the group’s newspaper Socialist Action.

In September 1978, Treen spoke at a forum organized by the pro-Mao Progressive Students Alliance in Wellington in which he defended the Soviet Union saying that they “had no imperialist tendencies.” In 1980, Treen indicated on page 7 of the Feb. 1, 1980 issue of Socialist Action that he supported the Soviet invasion of Afghanistan and opposed sanctions against the Soviet Union.

While the Socialist Action League imploded in the late 1980s, Mike Treen stayed true to his radical principles. The group changed its name to the Communist League in 1988, and in 1990, Treen stood for the local council in Manurewa, Auckland, on the Communist League ticket. He won 8 votes.

By the early 2000s, Treen was foreign affairs spokesman of the New Zealand Alliance Party, a coalition of former Trotskyists, Maoists, and pro-Soviet communists, Maori activists, unionists, and peace activists, which was briefly a serious contender for political power at a national level. In May 2006 Mike Treen traveled to Venezuela and Bolivia, according to Australian Marxist newspaper Green Left Weekly:

“Australian trade unionists who were part of a solidarity brigade to Venezuela participated in Caracas’s huge May 1 demonstration and had an opportunity to address the crowd from the front stage near Miraflores, the presidential palace.

“Participants in the brigade, which kicked off on April 25, included four representatives from the Electrical Trades Union (ETU) and one from the Australian Manufacturing Workers Union (AMWU). Mike Treen, senior organiser from New Zealand’s Unite union, also participated.

“The unionists marched as a contingent, complete with ETU and AMWU flags and a large banner expressing solidarity with the Venezuelan people.”

That same year Treen was a leader of the “New Zealand Committee to Free the Cuban Five,” an organization working to free five Cuban communist spies then imprisoned in the United States. So dedicated was Mike Treen to freeing Fidel Castro’s agents that he was given an award by Cuban ambassador to New Zealand Herrera Caseiro at a ceremony in Auckland Dec. 13, 2013.

Ambassador Maria del Carmen awarded eight of the activists with “the reproduction of the allegorical painting to the Five completed by Cuban painters and a thank you letter” for Treen’s work in fighting to free the Cuban communists.

Mike Treen has been on the wrong side of history his entire adult life. Will he ponder his choices as he sits in Givon Prison?