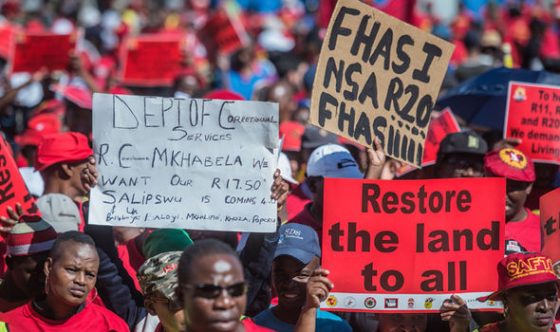 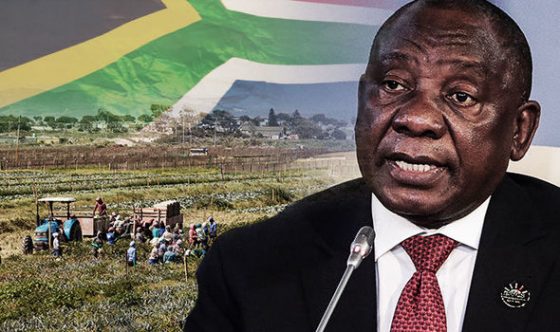 There has been an angry backlash against the president’s reforms (Image: CAMERA PRESS/Brenton Geach*GETTY)

The farmers have claimed that the government’s plan will be “catastrophic and could lead to anarchy and food shortages like Venezuela or Zimbabwe.” Oh, it will do that and so much more. It’s a certainty. Zimbabwe’s economy collapsed after they did something similar. Ramaphosa claims that 20 years after apartheid ended there, nine percent of the population is white and owns 79 percent of the farmland. These families have worked that land for decades and it’s theirs. It is theft to take their land and give it to others like this simply because they are white.

An organization representing South Africans, AfriForum, said that land expropriation with no compensation would have “catastrophic results like in Venezuela and Zimbabwe.” The organization’s chief executive Kallie Kriel said: “History teaches us that international investors, regardless of what AfriForum or anyone else says, are unwilling to invest in a country where property rights are not protected.” Business investors take a dim view of communists, totalitarians, despots, and dictators for obvious reasons. Ian Cameron, of AfriForum, said: “We’re really heading for a state of anarchy if something doesn’t change drastically. There are places where the police simply refuse to act. They don’t know the law well enough or refuse to apply it to logical reasoning when it comes to defending people’s property rights.”

This is the same kind of logic some use here in the United States when it comes to historic slavery in this country. Take what white Americans have now and give it to those who haven’t earned it simply because they are black. That is the very definition of racism. Americans today did not commit those atrocities and can’t be held liable for them. The people that want to take what others have earned are not entitled to ill-gotten gains this way and are Marxists in every sense of the word.

Thanks again for confirming everybodies suspicion. Please see below, and please explain to me how this does not look like your views. pic.twitter.com/LGRj5MBCBe

In the 1990s black South Africans received grants and subsidies to buy land plots, which resulted in overcrowding and poor land use. Most of South Africa’s black people live in crowded urban areas or rural reserves. The 1913 Native Lands Act made it illegal for Africans to acquire land beyond these reserves, which became known as “Homelands.” About one-tenth of land in white ownership has been transferred to black ownership since the end of apartheid, which is only a third of the government’s target.

It could be that Ramaphosa may be simply trying to win political points with the land reform ahead of an election next year. Bennie Van Zyl, the general manager of the Agricultural Union of South Africa (TAU SA), said: “For us, this is a pity that they’ve made their choice because no one will invest in this economy and we actually need growth to address the realities of South Africa. So we have great concern for this approach. A lot of foreign countries that have already contacted us as an organization say if that is the case, we are not willing to invest in your country anymore. And if the ANC goes through with this, it will be devastating for this country.”

A tweet on the ANC’s parliamentary Twitter account further shocked many on Thursday when it appeared to call all white people murderers. The party has subsequently deleted the tweet and said it was quoting someone else, though lawyers say they can still be held accountable. It read: “The biggest mistake we are making is to consult murderers. White people are 9% of the population, they own 79% of [the] land. They never came and consulted us for the land. If they want us to forgive them now, then let us share the land, the mineral resources.” Sounds like racial communism to me.

The tweet is a contribution/remark made by a member of the public. All tweets are a thread from the contributions made by the public, they are not the views of the ANC.

The party then told its critics who were incensed by the tweet that it had merely been quoting the remarks of one of the members of the public who had come to the parliament’s constitutional review committee’s public hearing on the review of section 25 of the constitution that was being held in the town of Beaufort West in the Western Cape. Very few believe that excuse. A legal expert, Helene Eloff, also weighed in to make it clear that the ANC had blundered and could be held liable for the view expressed since a disclaimer can’t be applied retrospectively. And it all ties back into seizing the farmland from white farmers and the hatred of anyone who is white.

The ANC in the Western Cape on Saturday congratulated the joint constitutional review committee for successfully conducting public hearings into whether the constitution should be amended to allow for expropriation of land without compensation.

The committee had held public meetings across the Western Cape in the past week, and on Saturday finished the public consultation process with a public meeting in Goodwood in Cape Town.

In a statement, the party said: “The people of the Western Cape have spoken. From Oudtshoorn to Beaufort West, Citrusdal to Swellendam, and finally, the Cape Metro, our people have unequivocally and overwhelmingly said section 25 of the constitution must be amended in order to fulfill the broad and fair land ownership across the province.

“The ANC is proud of its members who came out in numbers and made solid contributions in the public hearings. Our members and supporters are saying land reform through the amendment of section 25 will open the province’s productive forces and, contrary to popular belief, will actually increase agricultural productivity and be the catalyst for the broad industrialization of our country as millions get absorbed into [the] mainstream economy.

“Our people are saying [the] land is the basis for all economic activity and exclusion of the majority of citizens from land ownership prevents them from full participation in the economy. There is a clear message that land expropriation will have a positive impact also on social challenges as people are freed from [the] burden of landlessness and lack of assets.”

The statement added: “Our people believe that instead of affecting food security, land expropriation will actually expand it. Instead of causing social and economic upheaval, new economic players will emerge, and our economy may experience a leap forward.”

The party said that contrary to the fears of some, including right-wing organisations, the ANC had made it clear throughout the process, and in its National and Provincial Land Summits, that “not only are we concerned about food productivity, we seek maximisation of all agricultural land, so instead of removing some productive forces from the system, more will be added.”

Parliament’s joint constitutional review committee on Saturday concluded the provincial public hearings into section 25 of the Constitution in the Cape Metropolitan Area with one of the biggest gatherings to date.

The committee, which held a total 34 hearings in all nine provinces of South Africa, was instructed by the National Assembly and the National Council of Provinces to ascertain whether a review of this section and other clauses were necessary, to make it possible for the state to expropriate land in the public interest without compensation. It was also asked to propose the necessary constitutional amendments where necessary.

Racist bigoted scum you are.

Hundreds of concerned citizens attended the hearings Saturday at the Friend of God Church in Goodwood. The church held 1,500 and there were many more people outside that could not get in. Co-chairperson of the committee Vincent Smith said that following the hearings, the committee would assess the hundreds of thousands of written submissions it received after which it will invite those submitters, who indicated that they wanted to make oral presentations, to hearings at parliament. Once the process is finished, the matter will be deliberated before they report to both houses of Parliament.

The ruling ANC this week announced that it was going ahead with its intention to review the contentious section. In a late address on Tuesday, ANC leader and President Cyril Ramaphosa said his party will, through the “parliamentary process, finalize a proposed amendment to the Constitution that outlines more clearly the conditions under which expropriation of land without compensation can be affected.” It’s basically a done deal and there is still a very real possibility that white farmers and others will be slaughtered as this hatred moves forward. The ANC is communistic in nature and the hatred runs deep here. It can’t possibly end well.

Even if it was genuinely someone else’s tweet which was not the way it tweeted at all! Why on earth would the ANC be so blatantly irresponsible by sharing such racially divisive hatred on a public domain in their @ANCParliament name?

Tweeting 101: if it's not a retweet, or in quotes, or directly attributed to a third party, it's YOUR tweet.

Under South African law, the sharer of the Tweet is considered as liable as the creator. So that disclaimer does not help much…

ALso, the disclaimer cannot be valid retroactively. If the ANC did not agree with it, they should have stated accordingly from the get go.

Unacceptable. You can't backtrack now and pretend you didn't didn't say it. According to SA law if you tweet it you said it. Too late buddy.

How can anyone be this bad at social media? pic.twitter.com/wsylACQNlF

So would you also uncritically tweet someone calling black people the "k" word without quotation signs or attribution? This was either a really bad slip-up, or you are revealing more of your biases than you intended. Deeply worrying either way.

You tweeted racial hatred. Own your actions. Tsk!