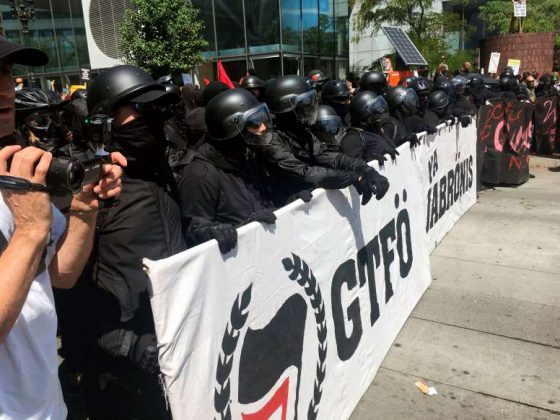 As I reported last week, Antifa was practicing getting their violence on in Portland, Oregon with the Patriot Prayer group. They did not disappoint. The police labeled it a ‘civil disturbance’ yesterday. It was a bloody riot. Frankly, I saw a ton of weapons and a number of people who got hurt during the melee. Antifa showed up in downtown Portland before the Patriot Prayer march. They were throwing projectiles at the police, including rocks and bottles, and feces and urine at marchers. Eventually, the police used flash-bang grenades on them.

As I looked through the media this morning, predictably they spun it as Patriot Prayer’s fault and painted all of them as the KKK and Nazis. More fake news and lies. Although I saw alarming weapons from both sides, those holding Nazi paraphernalia and KKK items looked to be Antifa trying to brand Patriot Prayer as such. Among the weapons seized were knives, clubs, pepper spray, eggs, rocks etc. The police were there enforce this time, trying to keep a lid on fights between Antifa and Patriot Prayer. They didn’t stop the clashes but eventually dispersed the marchers.

Police patrolled the streets at midday advising demonstrators to “get out.” Four people were arrested during the protests, the Portland Police Bureau said in a statement Saturday night. Officers also seized “multiple weapons throughout the day,” police said. A reporter for The Oregonian/OregonLive was bloodied when he was struck by a projectile, The Associated Press reported. Eder Campuzano said later on Twitter that he was “okay.” 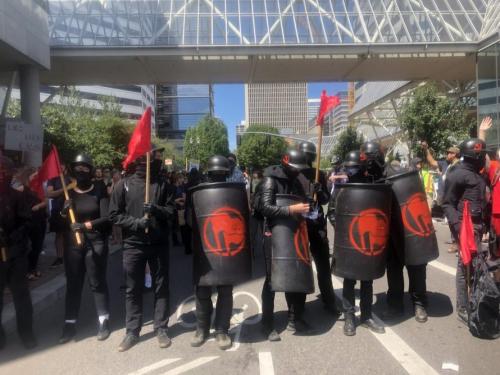 Patriot Prayer protesters and an affiliated group, the Proud Boys, met in a park at a rally organized by their group leader, Joey Gibson, but they were met by Antifa protesters carrying signs saying, “Nazis go home” and “Alt right scum not welcome in Portland.” Police stood in a line down the middle of the street to separate the two groups. The police presence remained strong throughout the demonstrations, as bomb-sniffing dogs patrolled and weapons checkpoints were visible. At one point, authorities deployed “flash-bang” devices to break up the feuding parties. Long sticks and homemade shields were confiscated, the AP reported. This protest was not as violent or bloody as the last two, but it wasn’t a walk in the park either.

Portland police had threatened to seize weapons after Patriot Prayer’s leader Gibson changed the venue for this latest event from a federal plaza outside a U.S. District Court to a waterfront park so some of his Oregon supporters could carry concealed weapons as they demonstrated. It is illegal in Portland to carry a loaded firearm in public unless a person has a concealed handgun license.

Antifa claims that while Patriot Prayer denies being a white supremacist group, it affiliates itself with known white supremacists, white nationalists, and neo-Nazi gangs. “Patriot Prayer is continuing to commit violence in our city, and their events are becoming more and more violent,” said Effie Baum of Pop Mob, a coalition of community groups organizing the counter-demonstration. “Leaving them a small group to attack in the streets is only going to allow them to perpetuate their violence.” That’s not what I have witnessed. Most of these people look like ordinary Americans who are observing their right to be there and protest against leftists. For the most part, they do so peacefully. The violence is mostly coming from the communists and Antifa. Antifa blames what they do on the right so they have an excuse to get violent.

Antifa trained with violent tactics for this event. They were planning on hurting people and chasing Patriot Prayer out of town. It’s disingenuous to paint the right at fault here when it is blatantly obvious the left is the one that is itching for a fight. Black-clad Antifa goons were filmed stealing a man’s American flag and hitting him in the head with a stick when he resisted. You could see him crouched on the ground and bleeding from his head. Police cars were also trashed and windows smashed in all this.

You can thank the mayor of Portland for a great deal of this. He has actively fostered these riots by blaming the right and praising the left as they got their violence on. He’s also had the police stand down so the communists could bludgeon Patriot Prayer protesters. Unsurprisingly, Antifa had union members among their members and they were chanting “Abolish ICE!” The Democratic Socialists of America, among many others, weren’t happy to see the police protecting the Patriot Prayer rally from disruption. The DSA Refoundation, “a caucus of revolutionary Marxists” active in the Democratic Socialists was also in attendance. The counter-protesters were made up of a coalition of labor unions, immigrant rights advocates, Democratic Socialists and other groups. They included people dressed as clowns and a brass band blaring music.

The leftists and communists taking part in the riot were very anti-police. Many of them wanted the right and the police attacked and/or dead. It’s ironic that Antifa protests fascists, since they are actually the fascists themselves. The City of Roses has been transformed into the City of Riots under Mayor Ted Wheeler. I have no bet in this race, but from what I have seen these are the typical tactics of communists and anarchists. It’s a wonder they have not turned deadly yet. Give it time.

The sound truck has announced: pic.twitter.com/qTiKhcs7pK

Man down. He’s dripping blood from his head. This is serious. He got in a struggle with some black clad dudes over a flag and one of them clubbed him. Video coming. #DefendPDX #Alloutpdx pic.twitter.com/2rWnAkAC2J

Video shows a struggle for a flag and then a black-clad person hit this dude in the head before he drops. I was watching the blood pour out of his head and into the street. #DefendPDX #AllOutPDX pic.twitter.com/KPRk1D8l00

Officers have continued to seize items that can be used as weapons throughout today’s protests. pic.twitter.com/s5QsyxuKrI

Looks like flash bangs and pepper spray being used. pic.twitter.com/NvwN3ua30d

'The Facebook page for Resist Patriot Prayer: Violent Alt-Right Bigots Off Our Streets," the group said it is willing to use physical force if necessary' i.e. it's openly conspiring to violate #patriotprayer 's civil rights. Why no Federal charges? https://t.co/6syBt0HJLl

About 80 Proud Boys and Patriot Prayer gearing up to go into Portland. They’re at the boat launch in Marine Park in Vancouver, WA pic.twitter.com/jknLS0kOvs

So it’s noon in #portland and right now police are keeping the two sides separated. Hundreds of Anti-fascist counter-protesters with a brass band look across the street at Proud Boys and Patriot Prayer. More PBs and PP on their way. #AllOutPDX pic.twitter.com/m3cIokJxKx

Chants of “Union workers here to say, Nazi thugs not your day!” #AllOutPDX

Ok here we go: cops issue dispersal order to counter-protesters because they’ve “spotted people with weapons.” Say failure to disperse will lead to arrest and use of “impact weapons” and “riot control weapons.”

Chants of #abolishICE in #Portland by counter-protesters. #AllOutPDX

Note the explosive at the end of this video. That’s what cops are firing to disperse anti-fascists. pic.twitter.com/Odd3z8ZYVR

After I took this video an anti-fascist was hit with some kind of projectile shot by cops. He seems fine. Cat and mouse game between cops and anti-fascists in Portland right now. pic.twitter.com/Fxk12pgbQO

Police have declared a “civil disturbance” and are ordering both sides to disperse or face arrest or riot control agents and impact weapons.”

Just your friendly reminder that all cops are bastards and will always side with the Nazis because Fascism is a natural and accepted part of the current state. #DefendPDX #AllOutPDX https://t.co/a41gbxDMAU

Y'all, the cops are actively, violently defending literal Nazis and attacking counterprotestors.

And people fucking act like Sarah Jeong being anti cop is a bad thing https://t.co/4Q2uvIGeGp

Oooh look guys! “The man” is trying to repress a group FIGHTING AGAINST FASCISM. Know which governments do that? FASCIST GOVERNMENTS. Know that the most recent fascist government was…NAZI GERMANY. https://t.co/S8EKIpodnD

Piggies leading the way for their fashy brethren.

Is there anything more metaphoric than a row of dumbshit cops literally clearing the way for nazis? https://t.co/0EfvvOZtz4

Was just standing next to @Oregonian reporter @edercampuzano, he got hit with something and is bleeding. Medics helping him. Things are getting extremely intense, even for those of us standing back from the center of these groups pic.twitter.com/F4ID7Dj2Zp

Soviet squad makes its way to the front of the standoff. #DefendPDX #AllOutPDX #Portland pic.twitter.com/DClTQbclr1