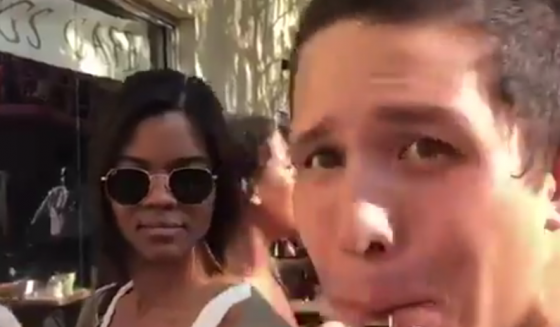 Antifa is getting more and more violent out there. This time it was the City of Brotherly Love… not so much it would seem… Philadelphia. An angry all-white mob of Antifa protesters encircled and attacked pro-Trump activists Candace Owens and Charlie Kirk at a restaurant in Philadelphia on Monday. Candace Owens is the communications director for Turning Point USA. Charlie Kirk is a founder of the organization. Both are young conservatives and it just so happens that Candace is a black woman.

They were attempting to eat breakfast at the Green Eggs Cafe when a number of Antifa goons spotted them. They sent out their moonbat signal and others came running. Numerous videos show the exchange. Owens and Kirk had water and eggs thrown at them at the restaurant. Police asked if they wanted to press charges and Kirk said they didn’t. They thanked the police, who “were all Hispanic and black,” for protecting them from the “white liberal thugs.”

“They’re soft fascists! They’re soft fascists!” one man screamed. Within 20 minutes of their arrival there they were being harassed from outside and inside the restaurant. When Owens and Kirk left, one protester threw a drink on them, while another shouted at them through a bullhorn. Owens posted videos on Twitter where white protesters can be heard chanting, “F*** white supremacy!” “To be clear: ANTIFA, an all-white fascist organization, just grew violent and attacked an all-black and Hispanic police force,” Candace tweeted. “Because I, a BLACK woman, was eating breakfast. Is this the civil rights era all over again?” You betcha it is… except conservatives are the ones being abused and attacked now.

Charlie Kirk and I just got ATTACKED and protested by ANTIFA for eating breakfast. They are currently following us through Philly. ALL BLACK AND HISPANIC police force protecting us as they scream “f*ck the racist police”. pic.twitter.com/x5WUNr9mM6

“An angry white mob surrounded and attacked an African-American woman yesterday. Now, this isn’t a headline from the 1960’s,” Glenn Beck said of the incident. “If there’s a museum of the absurd, this attack should be one of its main exhibits. They were actually screaming into bullhorns, directly at Candace Owens — an African-American woman — saying, ‘”F” white supremacy.’ These are white people shouting through a bullhorn at a black woman saying, ‘”F” white supremacy.’” To be clear, Glenn left out the part where they are communists and fascists as well.

This confrontation came just days after Owens was briefly suspended from Twitter for mimicking racist tweets by New York Times editorial board member Sarah Jeong. “Jewish people are bull—t … like dogs pissing on fire hydrants, #cancelJewishpeople Are Jewish people genetically predisposed to burn faster in the sun? The above statements are from @nytimes editor @SarahJeong. I simply swapped out the word ‘white’ for ‘Jewish,’” Owens wrote. Twitter withdrew its suspension as news of its decision spread. It was too much overwhelming pressure for them it would seem. Owens‘ tweet was shared nearly 15,000 times within hours.

At least Owens and Kirk did not get physically hurt. This is just shameful behavior and no one stood up for them either. Kirk tweeted on the attack: “So @RealCandaceO & I were peacefully eating breakfast this morning. Within 20 mins ANTIFA mobilized a protest, started screaming at us, attacked us, & threatened death against us. This is the face of the Democrats. Conservatives aren’t safe – @RepMaxineWaters called for this.” She certainly did and conservatives are not safe these days. This is why I say every conservative out there should carry concealed if they can and pay attention to what is going on around them. Your life and the lives of others may depend on it.

To be clear: ANTIFA, an all-white fascist organization, just grew violent and attacked an all-black and Hispanic police force.

Because I, a BLACK woman, was eating breakfast.

Is this the civil rights era all over again? pic.twitter.com/piJfnopniW

Kudos to Owens and Kirk for keeping their cool and not giving these Antifa thugs more ammo to use against them. Horrible things were being shouted not only at Kirk and Owens but at the cops as well. This is a powder keg and sooner or later it is going to end badly. That restaurant did not protect them and neither did any of the cowards that were eating there. Have a spine for God’s sake and stand up for someone like this against these goons! Owens and Kirk are better people than I am, I would not have been so civilized about it. This was just disgraceful in every sense of the word. The left is asking for it and the communists are just itching for a fight. They want chaos and bloodshed in the streets. At this rate, it’s only a matter of time.

Would like to personally and publicly thank the @PhillyPolice force for keeping us safe today. As you can see in the video, they were all Hispanic and black. The white liberal thugs were shouting “no good cops in a racist system”.
Listen to the BLACK female officer at the end: pic.twitter.com/R287Z4wHCr