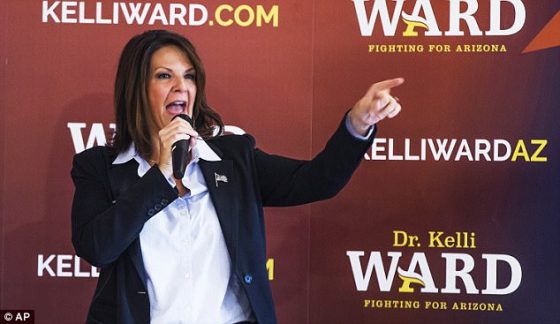 Were we insane waving signs on an Arizona street corner in 116-degree heat? No, we are patriots.

Hello America. Mary and I are in Arizona. Our Conservative Campaign Committee team was joined by local patriots to wave signs for Dr. Kelli Ward for U.S. Senate Arizona. We have more sign waves scheduled. This low-tech campaigning is important because enthusiastic supporters waving signs for Dr. Ward reminds voters that an election is coming, inspires her voters and possibly sways voters who are on the fence. Particularly in primary elections, voter turnout is extremely important.

Folks, Dr. Kelli Ward is one of us. She believes in lower taxes; fewer regulations; personal responsibility and following the Constitution. As a physician, Dr. Ward witnessed firsthand the devastating impact of Obamacare on people’s lives. She wholeheartedly supports Trump’s efforts to repeal it.

Dr. Ward says we have people in Washington, D.C. in both parties who are addicted to spending. This robs our kids. We must get spending under control. Amen sister.

She thinks Trump’s nominee for the Supreme Court, Judge Brett Kavanaugh is an excellent pick. Dr. Ward says most importantly, Judge Kavanaugh says the Constitution says what it says and it does not say what it doesn’t say. Kavanaugh vows to apply the law as written.

Dr. Ward is a strong advocate of securing our border and building the wall. Dr. Ward said the wall is “a symbol of a right and wrong way to come into the country.” It is also “a significant deterrent to the people who are trying to bring bad things into the country; the traffickers; the drug cartels who are bringing drugs and weapons and people across that border.”

Dr. Ward is a huge supporter of our military and veterans. Her husband served for 33 years. Dr. Ward says as a physician, her health policy experience, her Master’s degree in public health, her time in private practice and medical education makes her uniquely positioned to be able to help our regular healthcare system as well as the VA system that has been falling down on the job for way too long. “We’ve got to honor our promises to those men and women who signed on the line to protect our liberty and freedom.”  – Dr. Kelli Ward

In a conversation with a family member who only watches fake news, I explained that Trump is not the bad guy in this issue of separating children from their parents. The bad guys are the parents who sacrifice their children to illegally enter America. Due to Chain Migration https://bit.ly/2HaMJzk, a child getting on American soil eventually leads to the entire family invading America. These parents send their children alone on a nightmare journey to America, knowing they will be subjected to unspeakable horrors.

Dr. Ward said, “Whenever I hear border control agents talking about 12 year old girls who their moms put on birth control because they know they’re gonna be raped as they come across their journey; four-year-olds with the only connection with their dad is a magic marker phone number written on their t-shirt or nine-year-old boys dying in the desert of heat exhaustion with no family around, it breaks my heart.”

Ten thousand of the twelve thousand children we have in custody came to this country without their parents. Dr. Ward says it is a huge challenge to reconnect these children with their parents. She asked, “Where do we find these parents? Do we go and search in Mexico and Guatemala and El Salvador, in Honduras to look for those parents who sent their children across this border – put their kids in danger to come to this country illegally?” Dr. Ward says she is glad that HHS and DHS are stepping up, trying to put people back together. https://bit.ly/2KFmrps

Borrowing a line from the old TV show, To Tell The Truth, “Will the real candidate supportive of Trump’s agenda, please stand up.” Sit down Ms. McSally, you are a fraudulent impostor.

Rock-solid conservative Dr. Ward’s main opposition in the primary is Martha McSally. McSally is pretending to be for securing our borders and for Trump’s Make America Great Again agenda. https://bit.ly/2vMgZMl

Conservative Campaign Committee team member national recording artist Diana Nagy is a strong advocate of our military. https://bit.ly/2M2Eyvh Team member Donald LaCombe’s son is serving in the military. During our 116-degree Arizona sign wave, Diana, and Donald commented about the desert heat our troops endure in full gear to defend and protect our country.

Patriots across America, you can help this conservative warrior through our Phone From Home program. CCC team member Miss LuLu coordinates this effort to mobilize conservatives from across the country to get engaged and get on the phone lines to help us turn out conservative Kelli Ward supporters. You can volunteer from the comfort of your own home by simply sending an email to: [email protected]

My wife Mary and another CCC team member became a bit overheated. After taking a break in an air-conditioned car, both are doing just fine.