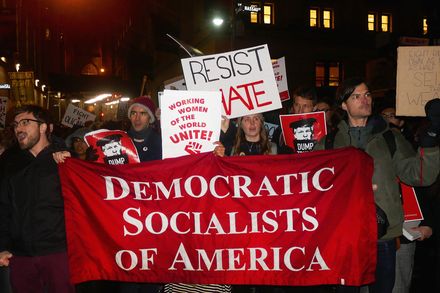 Realizing that old-style violent revolution was not working in Europe, Gramsci came up with a new plan. Rather than using the standard Marxist-Leninist revolutionary model of inciting the workers to revolt against their bosses, Gramsci reasoned, why not infiltrate communists into all areas of society?

The Orange County, California, branch of the DSA acknowledged its debt to Gramsci in its February 1984 newsletter:

“Antonio Gramsci was a founder of the Italian Communist Party. He developed theories on ‘open-ended Marxism’ and independent Euro-Communism. His writings have remained influential among European parties of the left for several decades. They have also formed a vital part of the ideas that brought about the formation of today’s DSA.”

With Gramsci’s doctrine firmly in play, DSA was able to accomplish this infiltration on many fronts. Here is a sample:

The Democratic Party has always been a major target for DSA. Most DSA comrades in the early days were also Democrats, and members held office all through the party.

The Congressional Progressive Caucus will likely gain several new members this coming election, including card-carrying DSA members Ocasio-Cortez of Queens, New York, and Rashida Tlaib of Detroit, Michigan. Both have won their Democratic primaries and look certain to be elected in November. But Ocasio-Cortez and Tlaib are far from the only DSA members and allies who have won their primaries so far this election cycle alone.

What Is the Plan?

While touted in the media as a new movement, DSA is nothing but warmed-over communism. Reading their inner party documents soon provides a clearer view of the organization’s intentions.

For example, Detroit DSA leader Dr. David Green visited Cuba to review the communist dictatorship’s health system. He wrote in Greater Detroit DSA’s May 2009 newsletter: “One of the most impressive features of Cuban society is its healthcare system. The Cuban system demonstrates what can be accomplished when health care is viewed as a human right rather than a commodity.”

Green also wrote in DSA’s publication Democratic Left, in Spring 2007, “Our goal as socialists is to abolish private ownership of the means of production.”

When DSA members boast that they want to end capitalism, they mean it. All private business is the Marxist’s enemy.

Pressuring lawmakers to implement policies favorable to the revolution is the ongoing goal of many Marxist organizations, and DSA is dedicated to several policies that they believe would further that goal. During their annual convention, an estimated 700 to 800 delegates voted to abolish the police altogether and additionally to empty the prisons.

The DSA has been clear about their desire to abolish the Immigration and Customs Enforcement (ICE) agency of the Department of Homeland Security. DSA wants to economically isolate “apartheid” Israel, strongly supporting the so-called BDS (Boycott, Divestment, Sanctions) movement. They are very active in pushing for so-called anti-gentrification policies and for rent control. One of DSA’s most coveted policy positions is the euphemistically named “Medicare for All,” or Single Payer.

DSA is using massive resources to push these policies on a local and national level, from having their thousands of members engage in knocking on doors, to pressure elected officials to make Single Payer a part of their platform.

Many DSA members tout “democracy” while supporting totalitarianism. Consider that many of their members are associated with — or are outright members of — the anarchist “anti-fascist” movement known as Antifa. One will rarely if ever, find a DSA member denouncing the violence of Antifa. DSA members were active “counter-protesters” along with other communist groups and Antifa during the infamous “Unite the Right” rally in Charlottesville in August 2017, for example.

One prime example of the DSA–Antifa alliance is evident in the violence-promoting organization, the Knights for Socialism, a front for Young Democratic Socialists of Orlando at the University of Central Florida. The members of the Knights for Socialism are largely DSA members, and leader Dylan Tyer has prominent positions with the local DSA and YDSA. It should be noted that the former regional field director of the Florida Democratic Party, Adam Whitmer, was elected chair of the Democratic Socialists of Orlando last year.

The Knights for Socialism gained notoriety for its “Bash the Fash” event held last year, billed as a “self-defense seminar” held “in response to the record number of hate crimes against Latinos, Immigrants, Muslims, Women, the LGBTQIA+ community, Jews, African Americans and other minorities since the rise of Donald Trump and other Alt-Right Neo-Nazis.” The Knights for Socialism logo is the Antifa flag.

In addition to their association with Antifa, DSA members can be credited for starting the politically embarrassing trend of ambushing immigration officials. The event that started the short-lived but media-hyped movement was an impromptu ambush organized by the Metro DC chapter of the DSA on Homeland Security Secretary Kirstjen Nielsen on June 19 while she dined with a colleague.

In that case, the chair of the Metro DC chapter, Margaret McLaughlin, posted the restaurant’s address on Twitter, prompting fellow comrades to come shout “Shame!” at Nielsen during dinner. Other DSA members included Allison Hrabar, Jesse Rabinowitz, and Austin Kendall. Instead of being condemned, the event received glowing coverage in The New York Times and CNN, among others.

The day after the ambush, and in response to media coverage referring to the participants as “activists,” the Metro DC DSA tweeted indignantly: “We’re not ‘liberals,’ not vague ‘activists.’ We’re socialist organizers.”

That initial action spurred a wave of ambush-like actions on the homes of immigration officials. But the glowing coverage of those actions ended abruptly after California Rep. Maxine Waters took the rhetoric too far a couple of days later when she instructed Americans to “absolutely harass” White House officials.

In the aftermath, DSA member Allison Hrabar received a bit of attention, considering her work in the anti-trust division of the U.S. Justice Department. It appears that Hrabar, a member of the Metro DC chapter’s steering committee, is still employed by the federal government while continuing to be very much involved in her socialist activism.

While DSA claims to fight authoritarianism at home, it is quite happy to support totalitarianism abroad. In February, long-time DSA comrade Daniel Adkins published an article in Democratic Left daring to argue that the United States was in economic competition with “mercantilist” China. This prompted a furious response by the Seattle DSA, Boston DSA, and the Communist Caucus of East Bay DSA claiming that his article “was both irresponsible and morally inexcusable” and “pits the U.S. working class against the Chinese working class.”

The critics insisted that the article be removed and further demanded that a “statement [be] published on DSA’s blog in due time affirming a commitment to internationalism, acknowledging that the Adkins piece should not have been published, and refusing to publish pieces promoting national chauvinist or anti-Chinese perspectives in the future.”

During their annual convention in August 2017, DSA dropped its longstanding affiliation to the Socialist International (SI), the more-than-a-century-old alliance of socialist and social democratic parties — because they are too moderate!

According to the revolutionary publication Left Voice:

“The resolution that passed stated, ‘Our affiliation with the Socialist International hinders our ability to develop stronger relationships with parties and social movements that share our values and which, in many cases, are bitterly opposed to their country’s SI affiliate(s),’ and, ‘In many countries, they have helped to lead the attack on the welfare state and on the rights of workers and unions.’”

After ditching the SI, the Democratic Socialists began looking around for new foreign friends.

According to an article published by Democratic Left on Nov. 25, 2017:

“Then he appeared on a Sinn Fein program and ‘shared a special moment’ with a former political prisoner about the Irish and Chilean struggles against authoritarianism.”

European United Left/Nordic Green Left is a caucus of communist, Marxist, and Green parties in the European Parliament, formed in 1995.

“They have taken special note of DSA as part of the larger surge of interest in socialism in the U.S. and the popularity of Bernie Sanders,” the article said.

When communists run for public office in America as openly communist, they are lucky to break 100 votes. Yet when they run covertly as Democrats, they can win seats on school boards, county commissions, and even in Congress. DSA is now 48,000 members strong. It has locals in every state and is busily taking over Democratic branches from Texas to Maine, from Nebraska to Hawaii.

Americans should demand that the Democratic Party be held accountable for allowing their party to be infiltrated by radical DSA Marxists.