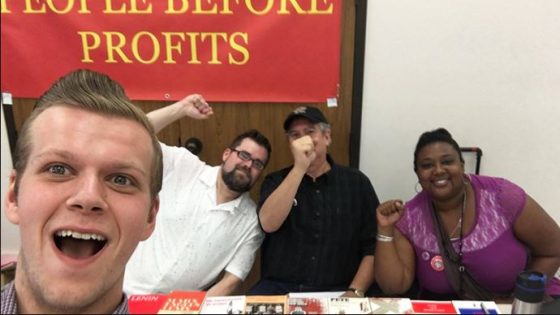 In the 73-minute interview, Sampson openly acknowledges that it is illegal to run as a communist in Texas while boasting that his Houston Communist Party Club is running four candidates for public office this cycle—two of whom he identified.

The first is a young mother, Sema Hernandez, who ran for the U.S. Senate as a “Democrat Socialist and a Berniecrat” in the Democratic primary against Beto O’Rourke.

Sampson named Hernandez as a Houston Communist Club member and, though she lost to O’Rourke, boasted that her impressive 250,000 vote tally was the highest ever achieved by a Texan communist. Hernandez is now a Texas leader of Rev. William Barber’s communist-dominated Poor People’s Campaign, which is currently organizing anti-Trump protests and marches across the country.

Shaw won her primary with an impressive 22,860 votes or 75.11 percent of the vote. She will now face incumbent Jack Cagle in the November general election.

Cagle had better be prepared for a mammoth fight because Shaw will have the Houston Communist Club’s 200-plus members working diligently door-knocking and phone-banking on her behalf. Shaw will also be supported by overlapping organizations such as Our Revolution and the Texas Organizing Project.

Shaw will also likely have the backing of the Coalition of Community Organizations, which is run by Sampson and the Rev. James Caldwell, a pastor who joined the Houston Communist Party.

Shaw addressed the July meeting of the Houston Communist Party Club. The comrades seem to have liked what they heard.

According to Sampson: “The club is working in Penny Shaw’s election campaign. … This precinct has over a million people in it and if elected she would help decide on the distribution to working-class constituents of a budget that’s well over a billion dollars a year.”

While not named by Sampson, the third candidate was likely Houston bio-chemist Ali Abbas Khorasani. An open member of both the Houston Communist Party and Houston Democratic Socialists of America, Khorasani ran in the Democratic primary for Texas’s 2nd Congressional District. Khorasani lost the primary but still ran a respectable second place with backing from both DSA and the Communist Party.

The fourth candidate is yet to be unidentified.

There is, however, one local far-left Congressional candidate who bears watching.

Texas state Rep. Sylvia Garcia is running for Congress in the open 2nd District seat being vacated by retiring Democratic Rep. Gene Green. According to a 2014 CPUSA convention report from Sampson:

“Comrades, I’d like to talk about the growth of the Houston club in the last year and a half, and the reason for that growth.

“Next, the political struggle here in Houston. We worked in the Sylvia Garcia campaign for state rep, in which she won.”

The CPUSA runs communists on the Democratic ticket all over the country. Ohio Communist Party Chairman Rick Nagin has run several times as a Democrat, often coming close to victory. The Party has boasted that several of its members are elected officials but won’t usually reveal who they are.

It is unethical for a communist to run as a Democrat, but in Texas, it’s illegal.

Will Texan authorities apply the law? Will they force known communists off the ballot? Will they punish the Houston Communist Party for its deliberate law-breaking? Will the Texas Democratic Party protect its integrity by expelling those who seek to exploit its good name for revolutionary purposes?