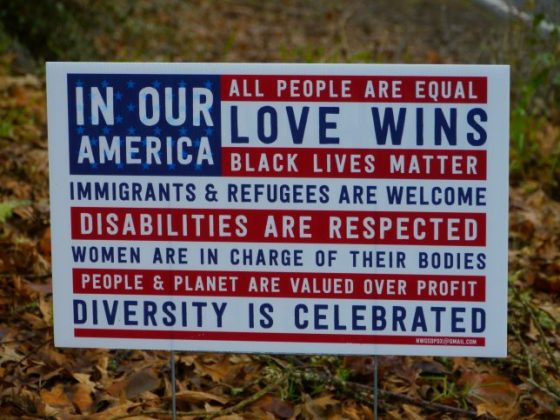 The nine VOLAGs, their many affiliates, and unaccompanied alien children contractors all receive funding from the federal government to resettle the various refugee categories. As mentioned earlier, unaccompanied alien children do not meet the definition of “refugee,” however their resettlement is managed through the Office of Refugee Resettlement and they are included when calculating the total cost of the overall program.

Most funding comes in the form of grants. Prime awards are grants directly from the federal government to the state or the contractor. Sub-awards are those given to contractors by other contractors or state governments that received the prime grant. They are left out to avoid double counting. Table III below enumerates prime grants to VOLAGs and unaccompanied alien children contractors for refugee resettlement and related programs. Some of the VOLAGs, for example the Ethiopian Community Development Council, focus almost entirely on refugee resettlement. Others, like the U.S. Conference of Catholic Bishops, International Rescue Committee, and World Relief Corporation of the National Association of Evangelicals, have a broader mission.

Of the latter, the U.S. Conference of Catholic Bishops is the largest. As Table III shows, in FY 2018 USCCB received $47.7 million for resettlement purposes. However, USCCB participates in other federal grant programs and that year received a total of $363.9 million from the federal government. And 2018 was a slow year. In FY 2017, USCCB received $531.5 million. It administers programs as diverse as Global AIDS, Food For Peace Development Assistance, USAID Foreign Assistance, and even the John Ogonowski and Doug Bereuter Farmer-to-Farmer Program, which provides volunteer technical assistance to farmers in developing countries. 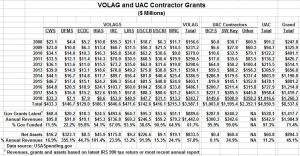 While it has received $742.6 million since FY 2008 for refugee programs, USCCB received a total of $4.1 billion from the federal government for all the various programs it administered during this period.

The International Rescue Committee, which has received $846.6 million for refugee resettlement since 2008, received a total of $1.5 billion from the feds over the same period. World Relief Corporation of the National Association of Evangelicals received $215.3 million for refugee resettlement and $276.2 million for all purposes. For all VOLAGs and unaccompanied alien children (UAC) contractors, the federal government has awarded $8.5 billion in prime grants for the refugee/UAC programs since 2008.

Note that starting in 2014, UAC program grants exceeded those for refugee resettlement. This remains true to the present time. While the Trump administration has successfully reduced the flow of refugees, asylees, and other groups, UAC continue to flood the border. Border crossings did fall to historic lows for the first few months after president Trump took office. But, expectations that Congress would formally adopt the DREAM Act or some other amnesty policy, together with unconstitutional interference from federal courts, has prevented the administration from enforcing border laws. Illegal crossings quickly shot back up to near historic highs by the end of FY 2017 and remain high to the present time.

The funds received by the main UAC contractors dwarf the refugee resettlement income of any of the nine VOLAGs. Three of the VOLAGs, Lutheran Immigration and Refugee Service, U.S. Conference of Catholic Bishops, and U.S. Committee for Refugees and Immigrants, also resettle some UACs, but most UAC business is handled by Baptist Child and Family Service, Southwest Key, and those in the “other” column. This last column includes numerous organizations that receive anywhere from a few hundred thousand to millions of dollars per year in prime grants for UAC business.

Finally, note the rows at the bottom of Table III starting with “Gov Grants Latest.” The “% Govt. Funded” line shows each organization’s level of dependence on the government for its operation. It ranges from a low of 22 percent for DFMS to a high of 99 percent for Southwest Key, with an average of 71.4 percent. It must be said that DFMS is the corporate entity for the entire Episcopal Church in the U.S., whereas the other “religious” VOLAGs are organizations distinct and separate from their various churches, focusing wholly on government work, so the numbers aren’t strictly comparable.

All of these contractors are tax-exempt and classified as “nonprofits.” However, they are not unprofitable. The “Net Assets” and “% Annual Revenues” lines tell you how much they have accumulated over the years from their resettlement operations. On average, the organizations listed have accumulated net assets worth 45.1 percent of annual revenues.

The Office of Refugee Resettlement offers a multitude of grants for refugees and Unaccompanied Alien Children to thousands of other NGOs in addition to the VOLAGs and their affiliates. It has created a billion-dollar ta 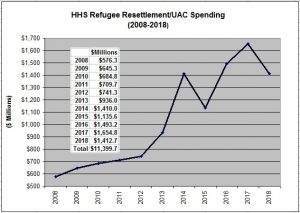 xpayer-funded advocacy industry that has experienced explosive growth. The chart below shows total ORR grants for refugees and UACs since 2008.

The thousands of organizations are almost all open-borders-oriented for conspicuously self-serving reasons. Naturally, they lean Left. In Massachusetts alone, which brags that one of every six residents and one in five workers is foreign born, there are 130 organizations that comprise the Massachusetts Immigrant and Refugee Advocacy Coalition (MIRA).[6] Other states have similar networks based on the size of their refugee/UAC programs and the level of non-profit engagement in the state. Measuring refugee-related expenditures of these various other NGOs is beyond the scope of this article, but Table IV (below) offers a small sample of the many organizations that have taken advantage of ORR grants. 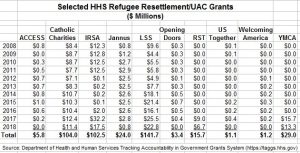 Many organizations not normally associated with immigration issues have also jumped on board. Who could imagine, for example, that YMCA of Greater Houston could take in almost $30 million for refugee resettlement over the last two years? Dearborn, Michigan-based ACCESS (the Arab Community Center for Economic and Social Services) describes itself as “the largest Arab-American community nonprofit in the United States.” According to its latest tax-exempt IRS filing, ACCESS took in $26.7 million in Fiscal Year 2016, $15.2 million of which was from government grants.  According to the chart, funding for refugee resettlement was only a small part of its government-funded activity.

Two refugee VOLAG affiliates, Lutheran Social Services (LSS) and Catholic Charities, receive millions in both prime and sub-grants for refugee resettlement. In many ways, they could be considered VOLAGs in their own right. They also act as prime contractors for the UAC program. UACs have added substantially to their bottom line, with UAC grants alone totaling $245.7 million for the two organizations since 2008.

Additionally, much like its senior partner, the U.S. Conference of Catholic Bishops, the many Catholic Charities affiliates across the U.S. receive grants from many different federal programs, such as Head Start, Section 8 Housing, homeless veterans’ programs, and others, in addition to refugee and UAC resettlement. In FY 2018 alone, Catholic Charities programs in the U.S. collected a total of $118 million in prime grants and another $1.3 million in Veterans Administration contracts. And even that isn’t the end of it. There is Catholic Community Services, Catholic Social Services, Inc., the Catholic Legal Immigration Network, and others, all of which receive resettlement and/or UAC grants. The Catholic Church does big business with the federal government and throws its weight around to protect its refugee resettlement franchise.

The Immigration and Refugee Service of America (IRSA) has received refugee resettlement grants totaling $102.5 million since 2008, including $17.5 million in 2018. But IRSA is a ghost. IRSA is not listed among 501(c)(3) charitable organizations and does not publish an annual report. Two online reviews of IRSA found in a Google search provide a Washington, D.C., address and phone number, but repeated calls—at all hours—get a busy signal. Two separate IRSA websites are referenced in these reviews, www.refugeesusa.org, and www.irsa-uscr.org. Both are defunct placeholder blogs with no reference to IRSA and no current information of any sort. The State Department’s archives list IRSA as a VOLAG, ironically, as of April Fools Day, 2001. However, it is not one of the nine current VOLAGs.

Bloomberg’s review describes IRSA as “a charitable organization that focuses on defense of human rights, builds communities, fosters education, promotes self-sufficiency, and forges partnerships through an array of programs.” Another review was written in 2008 by Melanie Nezer, currently Senior Vice President for Public Affairs at HIAS. Nezer was paid $30,000 in 2013 for a 30-page HIAS pamphlet, the notorious Resettlement at Risk, which advocated partnering with media and the widely discredited Southern Poverty Law Center to investigate and vilify refugee resettlement opponents. Your tax dollars at work.

Nezer was apparently employed by IRSA in 2008 and described it as “the oldest and largest non-sectarian network of organizations serving immigrants, refugees, and other foreign-born people worldwide.” Nezer listed a network of IRSA partner affiliates, most of which still exist. Lavinia Limon, the former director of U.S. Committee for Refugees and Immigrants (USCRI, one of the nine VOLAGs), is listed by Bloomberg as IRSA’s current director, along with COO Eskinder Negash, who is now director of USCRI. All in the family.

Officer compensation is not listed, but having received over $100 million since 2008, IRSA is paying someone good money. For what? When she directed USCRI, Lavinia Limon collected a hefty six figure salary, $300,114, in 2016. There have been frequent requests to audit the refugee resettlement program, especially the contractors, something that has never been done. What is going on there? Is IRSA some kind of slush fund flying under the radar because no one pays attention to this politically coddled, convoluted, Byzantine network of programs?

Welcoming America, an organization created specifically to advance the “Welcoming” mantra for refugees and immigrants, has received $1.2 million from the federal government since 2012. “Welcoming” is not an innocuous message. It employs a propaganda tactic to shame people into supporting Welcoming America’s open borders agenda. As founder and CEO David Lubell says, the goal is to “…recognize the role everyone must play in furthering the integration of recent immigrants…” (Emphasis added). Many politicians support the refugee program specifically so they can be considered “welcoming,” because “unwelcoming” is code for “racist, bigot, xenophobe, etc.” As a result, politicians often jettison their responsibilities to their electorate to avoid negative publicity. Public officials have been lambasted as “bigots” simply for questioning the program’s cost. An effort to recall a city commissioner in Fargo, North Dakota, for merely posing this question, is just one example. The recall effort failed, but how do responsible government leaders function in such an environment?

The Trump administration zeroed out federal support for Welcoming America, leaving it to rely on its substantial support from private donations. Between 2011 and 2016, Welcoming America received almost $10 million from open borders foundations like Open Society ($450,000), Unbound Philanthropy ($984,450), Kellogg ($200,000), Kaplan, ($595,000), the Einhorn Family Trust ($1.5 million), Carnegie, ($325,000) and others. The Welcoming network includes over 90 cities and 114 organizations, including US Together, the Southern Poverty Law Center, numerous VOLAG affiliates, 10 YMCA branches and even some governmental entities, like the Atlanta Regional Commission and Redwood City 2020.[20]

Together these nonprofits siphon millions of dollars from the federal government, spreading the gospel of immigration as they line their own pockets and perpetuate an agenda that advantages the Left as it dismisses justifiable concerns from communities strained by the needs of these newcomers. Look for more updates on this sprawling government program next month.