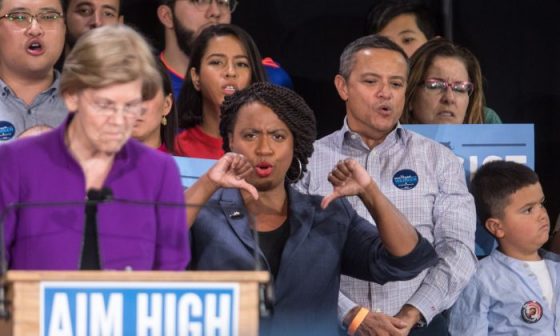 Lydia Lowe served as co-director of CPA-Boston for many years. She started out with the East Coast Asian Student Union and went on to join IWK, the LRS, and the UOC. In recent years she has been active with the FRSO front groups Right to the City Boston and LeftRoots. Lowe co-founded CPA-Boston’s Workers Center for immigrants and “secured bilingual ballots for Chinese and Vietnamese speaking voters” in Boston.

Long-time CPA-Boston president Suzanne Lee was also a member of the UOC and was endorsed by UOC-linked political action committee PowerPAC+ during her 2013 run for Boston City Council.

While CPA-Boston doesn’t flaunt its ongoing support for Beijing’s communist regime, the ties are consistent and ongoing.

Lee, along with CPA-Boston’s Director of Operations and Development Mark Liu and several other CPA-Boston activists, celebrated New Year’s Eve in December 2015 at the Chinese Consulate in New York. The Chinese government has even used the CPA-Boston headquarters as an unofficial consulate for Bostonians wanting to renew their Chinese passports without having to deal with the expense of traveling to New York.

CPA-Boston appears to be as loyal to the Chinese communist regime as it was during its overtly Maoist phase in the 1970s.

Pressley’s ties to CPA-Boston go back several years. In 2013, Pressley and Lee shared the stage at an endorsement event run by FRSO group Right to the City Boston. Pressley was running for re-election, while Lee was a first-timer.

According to a Right to the City Vote press release: “Both candidates fully support the Right to the City platform to Remain, Reclaim, and Rebuild Boston and are proven leaders who have stood on the frontlines with communities of color to fight for voting rights, library services, access to good jobs, and stabilization of working-class neighborhoods.”

Lee was also on the stage when Pressley launched her congressional campaign at a Cambridge restaurant on Feb. 13, 2018. No doubt Lee approved when Pressley pledged to the supporters assembled there that she would work on “rising health costs, access to capital for small businesses, income inequality, the growing wealth gap, systemic racism, and the Greater Boston area’s crisis of housing affordability,” according to the Bay State Banner.

Lee declared, according to Boston Chinese website Sampan: “I’ve known Ayanna since 2009 when she first ran for Boston City Council. She has always been a voice to tackle the issues that people say are too hard, such as education disparities for girls of color or single mothers.”

Pressley has worked with CPA-Boston on several Chinatown initiatives. In 2015, she helped CPA-Boston negotiate a deal with grocery chain Whole Foods to hire locals for a new store it was opening in the neighborhood.

On May 19, 2017, Pressley spoke before presenting the CPA’s Community Building Award to the Friends of the Chinatown Library, telling the assembled activists: “Thank you for your vision; thank you for your vigilance. It is especially heartening, given this current climate of xenophobia, that we are all here this evening.

“We begin [city council meetings] with saying the pledge of allegiance, and we end with the line ‘and justice for all.’ And every time, I amend it and say, ‘someday.’ The work of this organization is getting us closer to that ‘someday.’”

According to the group’s press release, CPPA chair Tom Louie said: “As City Councilor, Ayanna Pressley has been a champion of issues affecting communities of color, immigrants, working families, women, and those who are marginalized. She’s a proven leader representing the voices of the less powerful and less connected.

“Ayanna Pressley is not afraid of challenging the status quo, pushing for a bold progressive agenda for equity, social and economic justice. As immigration policies of fear, displacements, and separations prevail, we need a leader in Washington who assertively fights for long-term solutions. Ayanna Pressley is that leader.”

In response, Pressley praised her “partner[s]” at CPA-Boston: “I am humbled to have earned the support of CPPA. … CPPA and their members have been on the frontlines of many of the most important movements and policy decisions since their founding in 2011, and I’m proud to have partnered with them throughout my time on the Boston City Council. Their members and many others across the 7th District are faced with fear of displacement, uncertainty due to the cruel immigration policies of this administration, and many other issues.”

CPA-Boston is a radical socialist organization aligned with communist China. Most of its leaders are “former” Maoists, many affiliated with the ultra-secretive FRSO, which has long been active in infiltrating radicals into the Democratic Party.

As an aside, Pressley was also endorsed by the Boston chapter of America’s largest Marxist organization, the Democratic Socialists of America, when she first ran for Boston City Council in 2009.

If nothing changes, Pressley will almost certainly be elected as a member of Congress for Massachusetts’s 7th District. The establishment media will probably call her a “progressive champion” or a “fire-brand liberal.”

They won’t call her what she really is: a communist “fellow traveler.”