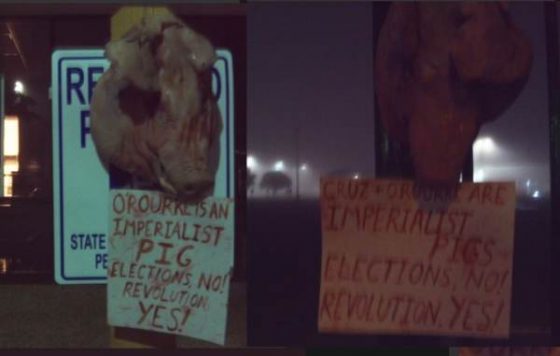 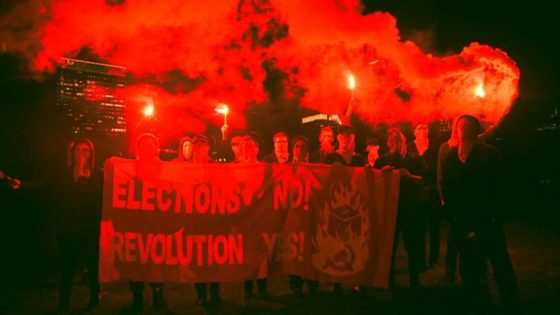 In Red Guard’s post, they called for a boycott of the “bourgeois elections” and advocated for organized revolutionary violence – subtle they are not anymore. They even had the stones to call for the formation of a “Red Army” that will destroy the existing state and replace it with a new authoritarian communist state:

Mainly this means uniting under Maoism, establishing self-defense units which are in time converted into a mighty Red Army, encouraging the self-administration of the community under the protection of this army, forming a new state posed to make war on the old.

They went on to call for armed violence which is their schtick: “Boycott the Bourgeois Elections! Elections, no! Revolution, yes! The ruling class will rule no more! Revolution, Peoples War!”

Do not fool yourself, whoever you vote for an imperialist pig will win at the peoples expense. Image supplied by…

While the Red Guard and Antifa were pushing their public proclamation for an election boycott, they decided to take an unoriginal swipe at both Senator Ted Cruz, who they labeled as a “Homophobic Imperialist Pig” and his Democrat opponent, Beto O’Rourke, who they called a “Zionist Imperialist Pig.” Guess they have more than enough hate to spread around to both parties these days.

Last Thursday, the Los Angeles Red Guard cell tweeted (archive) out images of the severed pig heads that were “placed at polling places and campaign offices” by their comrades in Austin, TX. The images suggest that the severed heads were placed at both Senator Ted Cruz and Beto O’Rourke’s campaign offices.

This armed extremist group that for months has been openly advocating for “revolutionary violence” is now putting the severed heads of pigs at polling places and campaign offices. Contrary to what many media outlets and personalities would have you believe, the left absolutely presents a legitimate threat of political violence.

Glad to see Far Left Watch is reporting on this. So is Gateway Pundit. I haven’t seen it anywhere else. But then again, considering no one seemed very upset that over 800 pages were purged from Facebook last week primarily because we reported facts and were conservatives, I’m not surprised.

Most of us violated no standards at all. My sin was being an editor for Right Wing News and writing an article that defended Kavanaugh and shredded Dr. Ford. It was full of sourced facts that were true. For that, I was non-personed a la Alex Jones. And the ones giving Facebook their marching orders on that was Media Matters.

Antifa is beating people, intimidating others and wreaking havoc in the streets. Now, they hang pig heads as a warning to politicians. They are very close to taking the violence all the way here and should be stopped. Unfortunately, they are cuddling with the Democrats even while protesting them along with the Republicans. It’s a small step from the threat of violence to the reality of it.

Contrary to what many media outlets have claimed, the far-left absolutely presents a legitimate threat of political violence.https://t.co/v4OHOXuCKP