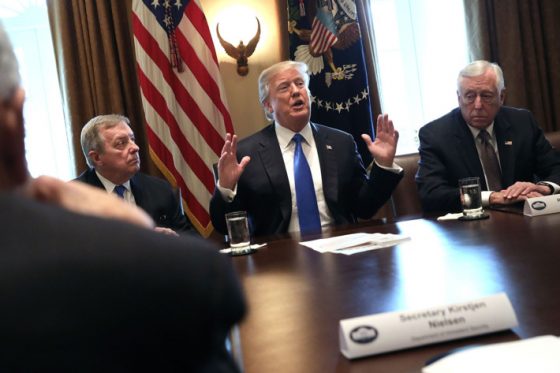 To demonstrate the extreme disappointment among conservatives, consider a piece I wrote more than two years ago: Trump Threatens Liberal Media Monopolies. In a hard-hitting statement, Trump adviser Peter Navarro had announced that Trump, if elected president, “will break up the new media conglomerate oligopolies that have gained enormous control over our information, intrude into our personal lives, and in this election, are attempting to unduly influence America’s political process.”

Nothing has been done. Now, in just one of many cases of censorship, Facebook has “unpublished” activist Peter LaBarbera’s Facebook page, claiming his opposition to homosexuality and transgenderism is “hate speech.” Pete LaBarbera notes: the social media giant cites “safety” concerns and being “respectful,” but by not respecting and tolerating Christian conservatives’ views, is Facebook guilty of “hate” and bigotry?

We just learned that Senator Chuck Schumer’s lesbian daughter is an executive at Facebook.

To be sure, Navarro, now the White House trade advisor, is doing his best to take a hard line against Communist China. Navarro recently denounced the Wall Street bankers, hedge fund managers, and globalist billionaires for opposing Trump’s America-first trade policies. But his position was then undercut by White House economic adviser and “free trader” Larry Kudlow, a former commentator for CNBC, part of the Comcast conglomerate.

Rather than take on the Big Media, Trump is appeasing the far-left and the libertarian Koch Brothers with his “prison reform” bill. Fortunately, Senator Tom Cotton released the following statement about the so-called First Step Act: “Unfortunately, the new text of this legislation reveals that what started as a prison-reform effort has transformed into sentencing reductions and early-release for dangerous, repeat felons, and I, therefore, cannot support this bill.”

One of the most basic lessons in politics is not to alienate your base. Trump claims to be for law enforcement and public safety. But he wants to rush a pro-criminals bill through Congress in the lame-duck session. The bill is supported by Trump son-in-law Jared Kushner, whose father was a criminal, and Van Jones, a former Obama official exposed as an anti-cop Marxist.

It will be up to Cotton and perhaps a few other conservatives to stop this dangerous jailbreak legislation.

Another failure by Trump, as we noted in our recent TV show with analyst Trevor Loudon, was the announced effort by Liberty University President Jerry Falwell Jr. to lead a presidential task force on higher education. We have to dismantle the Marxist Madrassas, as we argued in our book by that name, partly through more online learning opportunities. But nothing has been done by the White House or the Falwell task force. No wonder millennials with no jobs and college debt voted for Bernie and the socialists.

Then there’s the dope problem. The “Special Report” on Fox News on Tuesday highlighted in a positive way the legalization of dope in Massachusetts. Nothing was said about the evidence linking the drug to mental illness and violence. It was all fun and games: Wow! An East Coast First! Look at those long lines for dope.

It’s reported that Trump may go for full legalization of a nationwide basis, under the advice of Kushner and Trump adviser and marijuana investor Peter Thiel. Trump’s policies on dope are looking worse than Obama’s. And Fox, which regularly censors criticism of George Soros, is looking more and more like CNN and MSNBC.

Trump still refuses to face up to the historic Democratic landslide on November 6, calling it a “victory” for him.  The Democrats even captured Orange County in California, known as Reagan Country.

Analyst Trevor Loudon notes the use of the Rainbow Coalition or “Brown is the New White” strategy, embraced by Barack Hussein Obama, against the Republicans. They will use it in 2020 against what they hope is a very damaged President Trump and win with 52, 53 percent of the vote. “Then,” he adds, “they’re going to legalize every single illegal immigrant remaining in the country, which will give the Democrats 30 or 40 million new voters overnight, and then they have the one-party state.”

Despite a solid record against the United Nations, we are still waiting on the White House to grant a presidential pardon of Army soldier Michael New, who was court-martialed and given a bad conduct discharge under Bill Clinton for refusing orders to serve the U.N. in Macedonia. This is something Trump can easily do that cannot be reviewed by the courts. But again, nothing has been done except to shuffle our request on to another administrative office somewhere.

However, if you’re Kim Kardashian and make an appeal for freedom for a convicted drug trafficker, your wish is quickly granted.

It looks like, in order to get anywhere with the Trump Administration, you have to have powerful family, corporate or Hollywood connections or else rent a fancy room in the 5-Star Trump International Hotel. The Family Research Council, for example, was advertising a dinner at the Museum of the Bible and accommodations at the Trump International Hotel as part of the group’s first-ever Christian heritage tour & summit!

While that may work for private groups with Big Donor money seeking access to government power, liberal judges seem to be having the last laugh, thwarting Trump at every turn. Rather than fight, he laments the power of judicial supremacy and backs off. He has lost a series of immigration cases and even suffered a major setback on the matter of canceling a White House press pass for the obnoxious Jim Acosta of CNN.

“Put simply,” writes public interest lawyer Larry Klayman, “the overwhelming majority of the jurists selected by both Democrat and Republican presidents are the compromised product of the establishments of both parties.”

Klayman’s observation is most certainly true, and it even applies to Trump’s most recent Supreme Court nominee, Justice Brett Kavanaugh, a Washington insider recommended for the job by another Washington insider, the former Trump White House counsel Don McGahn.

Trump seems to think he can eventually win some of the cases he’s losing, as precious time slips away and more illegal aliens enter the country when they arrive before the ultimate arbiter, the U.S. Supreme Court.

These cases may include Special Counsel Robert Mueller’s anticipated decision to go to court to force Trump to testify in the Russia-gate probe. Kavanaugh would likely rule against Trump, demonstrating his subservience to liberal Rockefeller Republican Senator Susan Collins (who provided the decisive vote to confirm him) and solidifying his status as a Washington insider beholden to the Deep State.

Eventually, Trump may join the ranks of turkeys Peas and Carrots in seeking a pardon for himself. If that happens, and it looks likely, the biggest turkey for conservatives may turn out to be the Trump presidency. He may go down in history as the last Republican president, as a result of ushering in a socialist one-party state.