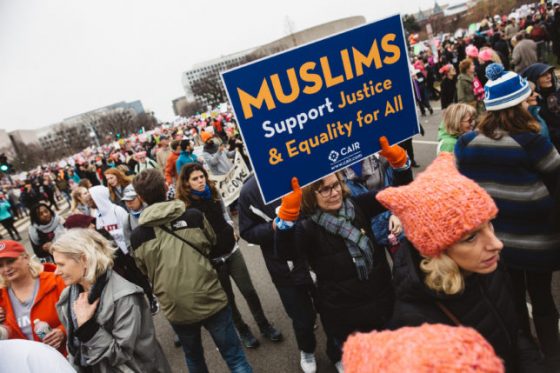 Summary: The Council on American-Islamic Relations has a history fraught with questionable associations and dubious claims related to Islam and terrorism. In its latest report, CAIR targets numerous nonprofit groups and grantmakers for “funding hate.” But these so-called “Islamophobic” groups are not hate groups at all—unless you use the definition of “hate” promoted by the discredited Southern Poverty Law Center. This careful analysis of CAIR’s report will debunk many of the organization’s central arguments.

So how much does CAIR take in annually? On its own, CAIR receives $14 million through its foundation and network of offices and has amassed $11.6 million in net assets, rivaling what the six “Islamophobe” nonprofits pull in, and outpacing them in assets.

The Islamic organizations listed above are some of the most prominent but by no means the only U.S. Islamic groups with possible ties to terrorist organizations. They are almost all part of the U.S. Muslim Brotherhood network. The U.S. Council of Muslim Organizations is included because, despite its tiny income during its formative years, it has become an important umbrella organization for the U.S. Brotherhood since its 2015 founding.

Also, as noted earlier, the Washington Trust Foundation is run by Esam Omeish, who has close ties to CAIR.

ACCESS, (the Arab Community Center for Economic and Social Services), describes itself as ” the largest Arab American community nonprofit in the United States.” It is very active in its home base of Dearborn, Michigan, but nationally as well.

Besides ACCESS and CAIR, one of the most prominent groups is the International Institute of Islamic Thought (IIIT). The IIIT is believed to have coined the phrase “Islamophobe” in the early 1990s. According to declassified FBI memos from the 1980s, the IIIT was also behind the creation of many prominent Muslim Brotherhood organizations in the U.S., including the Muslim Students Association, the Islamic Society of North America, and the North American Islamic Trust (NAIT).

Groups like the Islamic Society of North America, Muslim American Society and Islamic Circle of North America (ICNA), have multiple branches and ancillary organizations, for example, ICNA’s Institute of Islamic Studies. The table adds up the revenues and assets from each branch, based on their individual tax returns. These cannot be directly linked in the table but can be verified by a Guidestar.org search.

The North American Islamic Trust does not report its income, claiming exemption as a “religious” organization. However, in its own words, “NAIT holds titles to the real estate assets of Islamic centers and schools in more than forty States,” and one-quarter of all mosques in the nation. Terrorism expert J. Michael Waller estimates NAIT owns more like 50-79 percent of American mosques. These properties are estimated to be valued in the hundreds of millions of dollars. NAIT even receives farm subsidies from the federal government for some of its land but grows no crops. NAIT also runs a sharia-compliant stock fund, the Iman Fund, valued at $109 million as of 2018.

The North American Islamic Trust is closely associated with its founding organizations, the Muslim Students Association and the Islamic Society of North America. A declassified 1988 FBI document found NAIT was involved in:

Despite its small size, the Assembly of Muslim Jurists of America is a very influential organization that issues fatwas and otherwise dictates to American Muslims how to remain sharia compliant in an infidel nation. According to Islam Expert, former DHS investigator Philip Haney, “The current AMJA leadership structure includes six members of the Leadership Council (aka Majlis Al-Shura, or the Shura Council), nearly all of whom are graduates of Al-Azhar University in Cairo, plus eight Scholars, 46 Experts, and 41 Members. Combined together, this roster of 100 Islamic scholars is a Who’s Who of prominent Muslim Brotherhood leaders and Salafi Muslims affiliated with the Global Islamic Movement.”

CAIR and its allies regularly work with the Industrial Areas Foundation, (founded by Saul Alinsky of Rules for Radicals fame), SPLC and the ACLU. SPLC received $136.4 million in FY 2017, according to its latest tax return, and has amassed net assets of almost half a billion dollars. As it worked with CAIR on its report, the SPLC spent a big part of its time focused on vilifying groups like ACT and the Center for Security Policy.

The ACLU also works side-by-side with CAIR in legal actions of interest to local Muslim groups. ACLU’s vast resources and multiple field offices throughout the U.S. allow it to be at the beck and call of CAIR and groups like it when needed, and independently challenge laws and policies that CAIR opposes, like President Trump’s various travel bans from nations that sponsor terrorism.

Recall that CAIR’s report included the American Center for Law and Justice (ACLJ) in the “Islamophobia Network.” Comparing it side-by-side with the ACLU draws a stark distinction in funding and subsequent influence. There is literally no comparison. The ACLU also gets paid by the federal government when it wins certain cases.

But CAIR’s network of allies spans the breadth of the far Left network. The following is a list of groups that CAIR collaborated with this year to block President Trump’s efforts to secure the U.S. southern border. So, for CAIR to characterize itself as a tiny “civil rights” organization fighting against a vast “Islamophobic” network is literally the polar opposite to the truth. CAIR is part of a vast Red/Green network, fueled with billions of dollars in foundation money, and dedicated to the evaporation of the United States as the secure, prosperous constitutional republic that has inspired nations across the globe and served as a magnet for immigrants seeking a better life, for over 200 years. 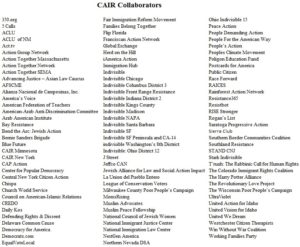 CAIR next attacks the foundations that donate to these evil Islamophobic groups:

Readers of this report will be as dismayed as its authors to learn that the same organizations that fund fundamental American institutions such as the Boy Scouts, American Red Cross, and the Salvation Army are also responsible for providing funding to anti-Muslim, Islamophobic groups.

The report cites certain “donor-advised funds” like Schwab, Fidelity, and Vanguard, as though they were somehow directly responsible for the activities of any group funded by these institutions. These “charitable investment accounts” allow donors to remain anonymous while donating to funds destined for charitable purposes. In today’s hyper-partisan atmosphere, where the Left and its Muslim allies are constantly seeking to expose, doxx, and threaten philanthropists, who can fault donors for wishing to keep their charitable activity anonymous?

Upon further inspection, the accusation falls flat. CAIR itself gets money from Schwab and Proteus, both donor-advised funds, according to Foundation Search. And while it has not received funds from Fidelity or Vanguard, the Islamic Society of North America did ($176,600 from Fidelity, $79,500 from Vanguard). The U.S. Council of Muslim Organizations, Islamic Circle of North America, Muslim Public Affairs Council and the Muslim Legal Fund of America have also received donations from Fidelity and/or Schwab donor-advised funds.

In fact, Vanguard, Schwab, Fidelity, and other donor-advised funds service donors who give to left-leaning groups. The donations these financial institutions make to religious and right-of-center groups are tiny by comparison. So CAIR’s characterization of donor-advised funds is yet another fraudulent misdirection in this report. The true goal is to intimidate those funds from facilitating transactions to CAIR’s political enemies.

CAIR also complains that the California Community Foundation donates to the American Freedom Alliance, Concerned Women for America (the largest women’s group in the country—much larger than NOW), and other such “evil” groups.

But CAIR California got $55,000 from the California Community Foundation in 2013, according to the Center for Public Integrity. The Muslim Public Affairs Council received almost $200,000 from CPI. CAIR California also received funds from both the Silicon Valley and Orange County Community funds, Wells Fargo, Blue Cross/Blue Shield, and the Women’s Foundation of California.

The $5.5 billion Rockefeller Foundations regularly fund Muslim Brotherhood groups. Last but not least, CAIR and its allies have access to George Soros’s Foundations For Open Society, which currently list a combined $13.8 billion in assets. Virtually all of the listed Muslim organizations benefit directly or indirectly from Soros largesse. The Islamic Society of North America alone received $625,000 between 2011 and 2016.

In the final section, learn how CAIR’s past casts its current work in doubt.