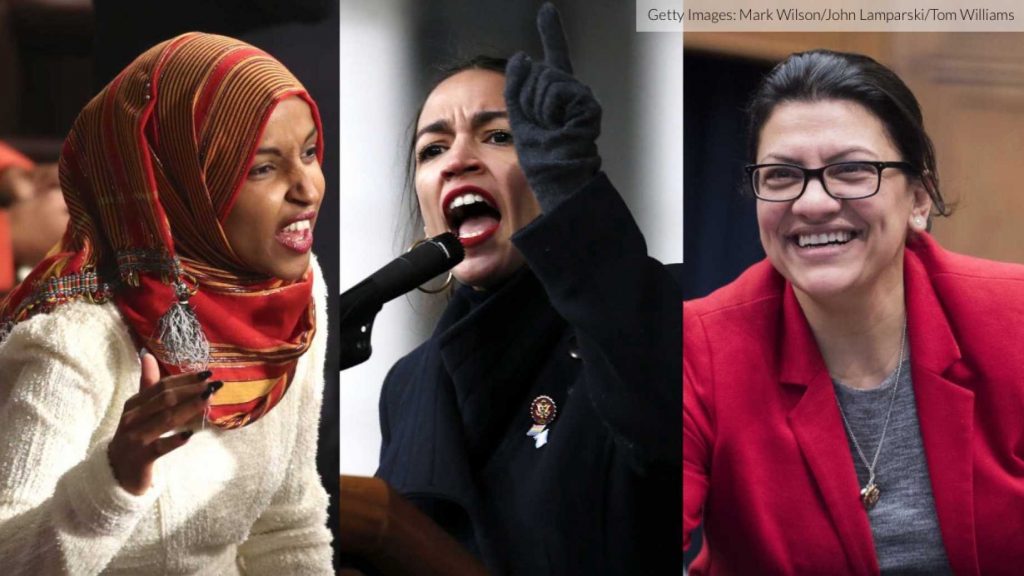 Territory refers to the demarcation of a country’s physical borders that define its earthly space and separate it from other countries, each with its own government. Without borders, there is no country.

The open borders platform embraced by the Democrat party is their signature anti-American immigration reform. Open borders deliberately threaten the sovereign territorial borders of the United States by rejecting any attempts to defend the borders against the current mass invasion of illegal immigrants. While disingenuously insisting that open borders are a humanitarian issue, Democrat candidates oppose border wall funding and propose abolishing ICE so that nothing and no one can stop the flow of this massive invasion.

Open borders are an anti-American power grab by Democrats with twin benefits to themselves. First, mass immigration will overwhelm the country with illegals who will vote for the Democrats who let them in, creating a one-party system for the foreseeable future. Second, uncontrolled immigration will collapse the economy by overloading the welfare system – it is the destructive socialists’ Cloward-Piven strategy on steroids.

In a stunning interview published on YouTube July 11, 2019, Nancy Pelosi tutors illegal aliens on how to avoid deportation and actually says that the United States is part of a global community and illegals have rights! Excuse me? Illegals are illegal by definition and are most definitely NOT entitled to the rights of citizens according to the U.S. Constitution. Yet, anti-American globalist Nancy Pelosi, voicing the 2020 Democrat party platform, declares the United States is not a sovereign country with defensible borders, and that U.S. politicians have no right to stop this illegal migration.

Former Florida Rep. and retired U.S. Army lieutenant colonel Allen West responded saying that Pelosi’s actions border on treason, “Unless I am grossly mistaken, Ms. Pelosi just violated her oath of office and has committed a high crime and misdemeanor.”

Population refers to the people living in a country. The United States is the third most populous country in the world with almost 329 million people as of May 2019. The U.S. Census Bureau is the primary source of information about our nation’s people. The Census Bureau counts the entire U.S. population every ten years. The results of the census are used politically for apportionment. Apportionment determines the proportional number of members each U.S. state sends to the House of Representatives and also establishes the number of eligible voters in that state. The question of citizenship has been part of the U.S. Census since its inception until Barack Obama eliminated it.

The Democrat party platform rejects restoring the census citizenship question because its results will reduce their apportionment in Congress and the number of eligible Democrat voters when illegals are not counted.

Demography is the study of the characteristics of a population and it is often said that demography is destiny. What does this mean?

Demography studies the size, structure, and distribution of different groups of people defined by age, sex, religion, education, nationality, ethnicity, etc. Social demography examines the relationship between economic, social, cultural, and biological processes influencing a population. As the demographics of a population change, public policy adapts to meet the changing requirements. So, flooding America with an immigrant population, particularly those with globalist and/or sharia-compliant hostile norms, changes the demographics and eventually public policy. This is the essence of the open borders immigration reform embraced by the Democrat humanitarian hucksters led by huckster-in-chief Barack Obama himself.

In America, Barack Obama imported 43,000 sharia-compliant Somali refugees into the United States, many were resettled in Minnesota. Ilhan Omar, also a sharia-compliant Muslim, was elected by her constituency and protects their hostile norms in the name of diversity actually accusing anyone who objects as Islamophobic or racist. The same thing that is happening in Minnesota happened in Luton, England because demographics are destiny.

The small English town of Luton had only one mosque. Following the European Union demand for mass immigration of sharia-compliant Muslims into England, the number of mosques swelled to thirty. This changed the demographics of Luton. The hostile social and cultural norms of sharia-compliant Muslim immigrants created crime and social chaos in Luton. UK journalist began reporting on Muslim grooming and rape gangs that were raping little English girls according to sharia law. British authorities protected the Muslim perpetrators in the name of cultural diversity and punished Tommy Robinson for exposing the crimes and the British coverup. Demographics are destiny.

Culture refers to the pattern of human activity and the symbols that give significance to them. Culture manifests itself in the forms of art, literature, clothing, customs, language, and religion. The way people live and what they believe constitutes their culture. Their principles and moral values also form an important part of their culture. People from different parts of the world have different cultural values. Cultural differences contribute to diversity in people’s thinking and living styles.

Culture is not innate it is learned. Culture is passed down from generation to generation at home and in school. American traditional Judeo-Christian values were taught at home and reinforced in schools. Not anymore. Since Barack Obama forced Common Core education into the public school system, American education has become globalized instruction that reflects its anti-American, antisemitic, anti-Christian, pro-Muslim, pro-globalist agenda. Common Core comports with the United Nations Agenda 2030 and its 17 sustainable goals designed to internationalize the world under a one-world government. The Common Core rejects American sovereignty, American exceptionalism, American Judeo-Christian traditions, and the American meritocracy. Common Core’s educational goal is to prepare the world’s children for membership in the globalized new world order of one-world government.

Common Core has had a calamitous effect on America, American children, and American families. Joy Pullman’s recent book, The Education Invasion: How Common Core fights parents for control of American kids, describes this catastrophe and exposes the federalized education scheme and the globalist funding that promoted it. Parents and teachers are finally recognizing the crippling anti-American nature of Common Core and are fighting to have it removed.

Common Core teaches American history as white racist oppression. Our American children are being indoctrinated to be self-loathing Americans who will reject Americanism, American Judeo-Christian values, American exceptionalism, the American meritocracy, and eventually vote for collectivism and one-world government. Common Core is part of the anti-American information revolution that will be won at the ballot box – no bullets required.

Any student of history knows slavery was a heinous historical reality in every part of the world including the United States. Any student of history also knows that Americans and Republican President Abraham Lincoln went to war and 750,000 Americans died to free the slaves in this country. Slavery is still legal in 15 countries including China, Russia, North Korea, India, Uzbekistan, Dem. Republic of the Congo, Pakistan, Sudan, Dominican Republic, Yemen, Iraq, Indonesia, Philippines, Guatemala, and Nigeria.

Racism in America began as a consequence of slavery. Slavery was outlawed in America with the 13th Amendment on December 6, 1865, eight months after the end of the Civil War, but the racist attitudes that supported it did not immediately disappear. America is not a racist country – we elected a black president – enough talk about reparations.

Race hustlers in the Democrat party platform disingenuously focus on historical slavery and intentionally ignore the ongoing slavery integral to Islamic sharia law. Women are the property of their husbands – owning a human being is slavery. Young infidel girls are groomed to be sex slave – rape and sex grooming is slavery. In the name of diversity, the Democrat party has surrendered its Judeo-Christian culture to the barbarism of Islamic sharia law.

Barack Obama’s post-presidency “resistance” movement has mobilized his loyal soldiers embedded in the government and unleashed a cadre of anti-American activists, politicians, and community organizers bound together by identity politics and an anti-American ideology seeking to overthrow the duly elected President Donald Trump. Obama’s hope for change agenda is the Democrat party 2020 platform featuring:

– Anti-traditional norms of our Judeo-Christian culture

Obama’s resistance movement poured the footing for this anti-American revolution of the 21st century. He subverted the liberal Democrat party launching its transformation into the extreme leftist, anti-American, anti-Christian, antisemitic, pro-socialist, pro-Muslim, pro-globalist debacle that it is today.

Radical newcomers Omar, Tlaib, Cortex, and Pressley have cracked the once unified Democrat party and radicalized it to staggering levels. Obama’s sycophants and embedded operatives targeted the pillars of American society including the meritocracy, the family, Judeo-Christian norms, and the Protestant work ethic. The 2020 Democrat party and its platform is an anti-American, antisemitic, anti-Christian, pro-communist, pro-Muslim, pro-globalist consortium of bad actors with a common cause to shatter the United States of America from within.

If the Democrat party prevails in 2020 and manages to destroy the four elements that make a country a country, America will cease to exist as a sovereign nation. What then?

Historically, to the victor goes the spoils – not this time. The leftist/socialist/Islamist alliance of the 2020 Democrat party platform will shatter and the infighting will begin. The leftist socialist Democrats foolishly presume they will impose their socialist fantasy of collectivism upon America. The Muslim Brotherhood leftist sharia-compliant Democrats foolishly presume they will settle America and make it Muslim. Both alliance partners are too arrogant to realize that they are the useful idiots of the globalist who have outwitted them. The globalists have exploited them and their common cause to create the social chaos required for globalist ambitions to rule the world themselves under a one-world government.

Leftists and Islamists brought a knife to a gunfight. English aristocrat Sir Bertrand Russell described the planned globalist takeover in his classic 1952 book, The Impact of Science on Society. The fight for world domination is not new – it just has new scripts, new actors, and new costumes.

Barack Obama won the starring role of U.S. President in the 2008 Washington D.C. theatrical hit “Hope and Change” and then renewed his contract for the 2012-2016 season. As with so many long-running shows, “Hope and Change” flopped at the box office in 2016. The audience rejected Hillary Clinton, the actress hired to replace Obama, and stopped buying tickets to the play. A new script titled “Resistance” was created for Obama, and Alexandria Ocasio-Cortez auditioned for the supporting role of New York congresswoman and won the part. She performs her scripted lines well and will continue to do so until she is replaced by another auditioned actress.

The Democrat party is currently auditioning parts for the 2020-2024 season of “Resistance.” Its plot disguises anti-Americanism as altruism which explains why its globalist authors have requested anonymity. “Resistance” poses a clear and present danger to the world order of sovereign nations. Americans must recognize the humanitarian hoax being performed in “Resistance” and stop buying tickets at the box office.

Voters are being urged to invest in “Resistance,” and millions of dollars are being spent to promote it. This particular globalist extravaganza enjoys record levels of free publicity by the mainstream media and on the Internet.

The 2020 presidential elections will determine the success or failure of “Resistance.” Voting Americans will decide if art imitates life or if life imitates art.