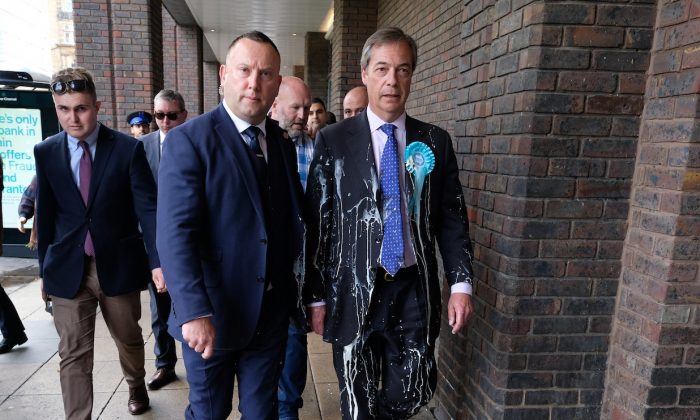 The left in the United States is on a path to acceptance and even encouragement of political violence.

Desperate to achieve traction against the obvious economic and political successes of President Donald Trump, the left is increasingly willing to use violence—from low-level “milkshaking” assaults to life-endangering terrorism—as a tool to shut down the opposition. Unless stopped, the left will take the United States down a very dark path.

On June 1, it was reported that Pensacola, Florida, activist Amanda Kondrat’yev was “charged with battery” after throwing a drink—apparently a milkshake—at Rep. Matt Gaetz (R-Fla.).

The media generally made light of the assault, mentioning many times that Kondrat’yev had previously stood for Congress against Gaetz. The media failed to report, however, that Kondrat’yev is a leader of the Pensacola branch of the nation’s largest Marxist organization: Democratic Socialists of America (DSA). Most media also forgot to mention that Kondrat’yev was one of four plaintiffs involved in a lawsuit against the city of Pensacola to force the city to remove a 78-year-old cross, which was placed in Bayview Park in 1941 by the community as the United States was entering World War II.

Kondrat’yev’s attack on Gaetz was clearly premeditated. On four separate days preceding the attack, Kondrat’yev posted many memes on Facebook praising the practice of throwing milkshakes at political opponents.

“Despite the physicality of milkshaking, the goal of the act is public humiliation and drawing attention to the ridiculousness of the target and their awful ideas. …

“A civilized marketplace of ideas is a nice sentiment, but it can’t exist when some of those ideas are inherently violent. Violent ideologies have no place in civilized society, and the best way to respond to them is not with civilized debate—which suggests such arguments are made in good faith (they never are)—but with outright humiliation. This public humiliation states loud and clear that such ideas are unwelcome in our society, and those who push them will be shamed and excluded until they change their ways.”

“Public shaming,” or loudly calling out damaging policies or activities, is a perfectly legitimate way to deal with genuine fascists, socialists, communists, Antifa thugs, global warming fraudsters, and other political criminals. However, Kahan deliberately blurs the line between “shaming” and physical violence or threat of violence. Milkshaking is a crime on the same continuum as a punch in the nose.

Any unlawful or unwelcome physical contact is an assault and has no place whatsoever in political or social interaction.

It’s very clear that those who condone milkshaking are happy to advocate other forms of violence.

On June 30, for example, Hugo Award-winning author Sarah Gailey wrote on Twitter, “If we can’t throw milkshakes, I guess we’ll just have to go back to bricks.”

Multiple Antifa memes circulating on social media illustrate that milkshaking is just part of a range of violent tactics designed to shut down free speech. On May 27, “Antifa International,” an active Twitter account with more than 15,000 followers at the time of this writing, posted an image of Farage with an accompanying meme showing that after milkshakes come bricks, Molotov cocktails, and the guillotine.

Good to know where we at. pic.twitter.com/7x0a5H1QfA

In Portland, Oregon, on June 30, journalist Andy Ngo was one of eight people who needed medical care in the wake of a brawl that included milkshaking.

In a local article about the events that took place, Olivia Katbi Smith, co-chair of the Portland branch of the DSA, told the Portland Tribune that “she hoped to promote the concept of ‘everyday anti-fascism,’ since ‘Antifa’ can be an intimidating term.”

On July 13, Washington state anarchist and “former member” of the Puget Sound branch of the John Brown Gun Club (a spinoff of Antifa group “Redneck Revolt”) Willem Van Spronsen attempted to “set a fire with incendiary devices during an attack at an ICE [Immigration and Customs Enforcement] detention center in Tacoma. … [He] was armed with a rifle and threw ‘lit objects’ at buildings and vehicles in the parking lot,” according to Heavy.com.

In a manifesto given to comrades before his rampage, Van Spronsen wrote in part (typos included):

“the semi automatic weapon i used was a cheap, home built unregistered ‘ghost’ ar15, had six magazines. i strongly encourage comrades and incoming comrades to arm themselves.”

Not one of the people who received the manifesto notified the police.

As an important aside, CNN’s W. Kamau Bell highlighted the Puget Sound John Brown Gun Club in May on his show “United Shades of America.” On Facebook, Bell gushed that the group is “actively working to end white supremacy” and encouraged readers to “She [sic] some support for the PSJBC.”

One of the most revealing insights into the motives of Van Spronsen comes from his ex-wife, who, since 2013, obtained four domestic-violence protection orders against the Antifa adherent, according to The Seattle Times. Earlier this year, she claimed Van Spronsen spoke of committing suicide by police while carrying out an anarchist action. According to The News Tribune:

“’He would also talk about dying for a cause and anarchist actions,’ she wrote, among other concerns. ‘This was near the end of our marriage. I found it very scary and upsetting because I believed he would do it, even if it hurt someone and even if he died as a result.’”

He was barred from owning firearms as part of a court order against him.

Van Spronsen, who was born and raised in Holland, reportedly pointed his weapon at police officers. The weapon “malfunctioned” during his attack. He was killed at the scene and thankfully didn’t take anyone with him.

This wasn’t Van Spronsen’s first attempt at political violence. According to a local news report, he “lunged at an officer’s neck during a protest at the same detention center” in 2018, while an officer was attempting to detain a protester. Court records revealed that detectives found a “knife” and “baton” on Van Spronsen.

He was charged with third-degree assault, obstructing an officer, and resisting arrest, according to The News Tribune.

Despite his violent tendencies and fanaticism, Van Spronsen has been labeled as a hero by the American Left—and not just stereotypical far left. Shockingly, Reps. Ocasio-Cortez, Ilhan Omar (D-Minn.), and Ayanna Pressley (D-Mass.) all refused to denounce the attack when confronted by Keean Bexte of The Rebel Media.

On Twitter, “tenure-track” professor Jorge Cuellar of Dartmouth College celebrated Van Spronsen, referring to his rampage as “an act of great courage” and said, in part, that “direct action is an important instrument in the activist and revolutionary toolkit.” In a since-deleted tweet, Black Lives Matter activist and Bernie Sanders fan Shaun King praised Van Spronsen as a “martyr” and said his rambling “manifesto” was “beautiful, painful, devastating.”

The Antifa group Seattle Antifascist Action praised Van Spronsen as a “martyr in the struggle against fascism” and touted his death as “a call to protest and direct action” in a now-deleted Facebook post.

The phrase “direct action” is anarchist code for “violence.”

Teen Vogue writer Kim Kelly wrote on Twitter that the reporting surrounding the domestic terror attack was “biased in favor of ICE” and further said Van Spronsen was engaged merely in “righteous sabotage.”

Some of the reporting around Willem Van Spronsen’s last stand has been inaccurate & biased in favor of ICE. He targeted *the parking lot* where the vehicles used to deport prisoners are kept, not the prison building itself. Make no mistake: this was an act of righteous sabotage. pic.twitter.com/KRVA0ShhbR

Violence As a Political Tool

The U.S. Left is now gripped by a “Lord of the Flies”-type mass psychosis. They genuinely believe they are battling a “fascist” enemy—which turns out to be Republicans, President Trump supporters, patriots, traditional Christians, border sovereignty advocates, and anybody who supports the U.S. Constitution.

During the late 1960s, the U.S. Left, marinated in self-righteous indignation over their opposition to the Vietnam War (which they conveniently forgot was started by a communist invasion of sovereign South Vietnam), carried out mass rioting and terrorist bombings all over the country.

The violence was stopped only through resolute federal government action. One particular action was the famous “Chicago Seven” trial.

After mass rioting around the 1968 Democratic Party convention in Chicago, seven ringleaders were put on trial. Five were convicted and imprisoned for five years each for crossing state lines to start a riot—a felony. These convictions “broke the back” of the protest movement. While protests continued until the end of the war in 1975, the movement never regained the momentum or magnitude that it had before the “Chicago Seven” convictions.

How many Antifa and Black Lives Matter leaders have crossed state lines to start riots in the last few years? Those laws are still on the books. Why are they not being enforced?

Without firm federal-level action, leftist political violence will only increase. More people will almost certainly die as a result. The fabric of this nation may become irreparably damaged.

Few well-balanced adults resent the well-deserved spankings they received for childhood misbehavior. Now is the time for the violent U.S. left to be subject a long-overdue federal government “spanking”—a crackdown on political violence and intimidation.

This will have to be organized at the federal level because many states and municipalities are either unwilling or unable to police their own political criminals, let alone those coming from other jurisdictions.

Unless the spoiled tantrum-throwing brats of the Left are put firmly in their place quickly, this country is heading for a world of hurt.

Many of these leftists, when confronted with and punished for their evil, will come to their senses. Many will one day be thankful that their violent tendencies were curbed early before they committed acts for which they could never make amends.

Mayor Rudy Giuliani turned around a crime-ridden New York (made much worse by the preceding mayor, DSA member David Dinkins), by instituting a “broken windows policy.” Giuliani decreed that minor crimes were to be dealt with harshly before the perpetrators were tempted to move on to bigger things.

It’s only a matter of time before some on the Left move from “milkshakes” to Molotov cocktails. Now is the time to stop them—before there is serious blood on the streets.