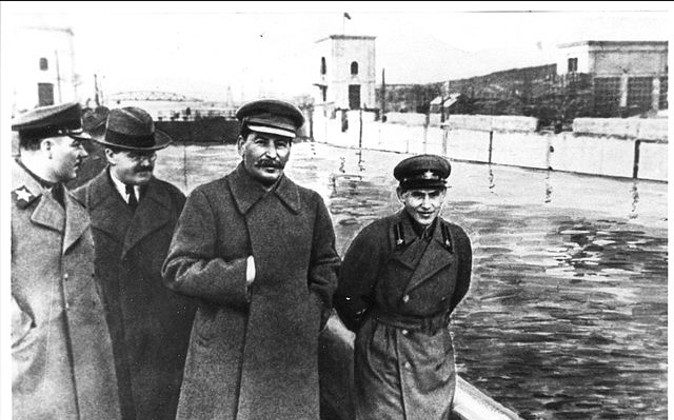 Kliment Voroshilov (L), Vyacheslav Molotov, Joseph Stalin and Nikolai Yezhov (R) at the shore of the Moscow-Volga canal in this file photo. Molotov fought to gain power after Stalin’s death in 1953 while Yezhov was tried and executed in 1940. (Wikipedia Commons)

The Democratic Socialists of America (DSA) pulled off a deft move at its biennial National Convention in Atlanta in early August.

The United States’ largest Marxist organization passed a resolution declaring that it wouldn’t endorse any Democrat except Bernie Sanders in next year’s presidential election.

Many commentators, including some less-sophisticated DSA comrades, saw this as a bad move. One opposing delegate summed up the argument of many when he or she said, “Trump is too dangerous to take cards off the table right now”; that side narrowly lost the resolution battle.

The argument is that the DSA has backed itself into a corner. If Sanders loses, they reason, the DSA will be unable to endorse the winner. That will mean that the DSA will be sidelined, marginalized from the anti-Trump opposition that will coalesce around the Democratic nominee—which this author believes will be Sen. Kamala Harris from California.

In a move likely designed to heal post-conference divisions over the Sanders endorsement, decadeslong DSA comrade Harold Meyerson wrote an essay for The American Prospect, titled “What the Socialists Just Did—and Why,” explaining why the DSA has done a very clever thing.

Meyerson, a professional journalist who has worked for The Los Angeles Times and The Washington Post, starts by summing up the failed faction’s fears:

“It’s a good thing that organizations don’t have children or grandchildren. If they did, you could envision little tykes (well, little infant prodigies) 50 years from now asking their grandparent—the Democratic Socialists of America—’What did you do in the war against the neofascist Donald Trump?’ only to be met by an awkward pause.”

Meyerson understands that fear well, but his lifetime of experience on the far-left has taught him to think more strategically. He understands full well that even without a formal endorsement, DSA comrades will work hard for almost any anti-Trump candidate—just as they did for Hillary Clinton in 2016.

“The vote on the resolution was actually fairly close, though support for Sanders in the primaries is overwhelming within the organization. And its proponents provided a number of qualifications and caveats, making clear that DSA members are free to campaign for the eventual Democratic nominee if they so choose, and that in 2016, DSA locals did campaign against Trump (and members for Hillary) in swing states.”

But here’s the real deal. Meyerson harkens back to World War II when the Communist Party USA (CPUSA)—then at the height of its power and influence—dissolved itself on the seeming orders of party Chairman Earl Browder. The dissolution of a mighty, disciplined party into a loose collection of “Communist Political Associations” shocked many at the time. Why would a powerful growing party dissolve itself voluntarily into some vague loosely knit “association” when so much was going in its favor?

“In 1944, the U.S. Communist Party effectively, if temporarily, self-abolished so its members could support Franklin Roosevelt’s re-election bid, as part of the fight against fascism. To be sure, that move came at the behest of Joseph Stalin, whose nation was allied with ours in the existential battle against Hitler. … [The] U.S. Communist Party understood the gravity of the fascist threat. Why not DSA?”

It was all a ruse, you see. After President Franklin D. Roosevelt won reelection, the CPUSA reconstituted itself and carried on just as before. In other words, Stalin told the CPUSA to (temporarily) dissolve so the “communist” issue wouldn’t interfere with Roosevelt’s reelection chances. The CPUSA was intimately interlocked at every level with Roosevelt’s administration and the Democratic Party. This was worrying to millions of American voters and was a real liability for the Democrats.

In 1944, Robert R. McCormick, publisher of the Chicago Tribune, expressedmany voters’ concerns when he claimed that the communist-dominated Council of Industrial Organizations (CIO) was leading Roosevelt by the nose:

“They call it the Democratic national convention but obviously it is the CIO convention. Franklin D. Roosevelt is the candidate of the CIO and the Communists because they know if elected, he will continue to put the government of the United States at their service, at home and abroad. … The CIO is in the saddle and the Democrat donkey, under whip and spur, is meekly taking the road to communism and atheism. … Everybody knows that Roosevelt is the Communist candidate.”

So to help Roosevelt get elected, Stalin took the “communist” card off the table. Moscow has been manipulating U.S. elections for more than 70 years now—almost always in favor of Democrats.

History repeats. Now, socialism is the “bogey” of the day, and Democrats don’t want to be tarred with that brush—although they richly deserve it.

“[I] seem to have a political-consultant mind. And that mind tells me that the eventual Democratic presidential nominee needs the formal endorsement of DSA like a hole in the head.”

Meyerson acknowledges that a DSA endorsement can be great for a local candidate in a left-leaning area, but it could play disastrously on a national stage:

“Where DSA is strong and where socialist and progressive candidates can win—generally, in cities with substantial populations of millennials, immigrants, and minorities—a DSA endorsement can make all the difference, producing scads of the most tireless precinct walkers and dedicated phone-bankers. It has made that difference in New York, Chicago, and any number of smaller cities.”

But here’s the kicker:

“In nearly every state, and certainly in the nation at large, however, a DSA endorsement would be one more item on the bill of particulars the Republicans would hurl at the Democratic nominee in hopes of revving up more of their right-wing base. In every encounter with reporters, the nominee would be pressed about DSA’s endorsement.”

In other words, a DSA endorsement would give President Donald Trump ammunition against the Democratic nominee. The DSA will use Sanders’s doomed campaign to build DSA membership and further the mainstreaming of socialism. By not officially opting to get behind the Democratic nominee, potential DSA recruits will admire how staunch and principled they are. A DSA endorsement wouldn’t hurt Sanders, but it would surely hurt Harris or any other Democratic candidate and may even cost the election.

When Sanders inevitably fails, better to not publicly endorse the winner, but work for her quietly behind the scenes instead.

Meyerson gets pretty explicit about this strategy—in case some of the slower comrades don’t catch on. He invokes the tactic that Atlanta DSA pursued when pressed to endorse far-leftist Stacey Abrams during her very tight race for the Georgia governorship in 2018:

“I think DSA’s national political committee might take a leaf from the group’s Atlanta local during Stacey Abrams’s 2018 campaign for governor. At the time, the local wasn’t endorsing nonsocialists, and some of its members likely believed—rightly, I’d say—that a DSA endorsement would be one more cross Abrams would have to bear in her bid to carry Georgia. Nonetheless, every other progressive group inside and outside the state was enthusiastically backing her, and many DSA members were eagerly working on her campaign. Here’s what the local said:

“‘For many reasons, we cannot endorse Abrams ourselves, but neither can we stand aside while our friends and allies fight for something they know will make their lives better. We voted to encourage our members, if they feel so moved, to stand up and fight in this election cycle.’”

Which is exactly what they did. Many DSA comrades were involved in the Abrams campaign, which came within a whisker of success. However, there was no formal DSA endorsement for the Republicans to hang around Abrams’s neck. Abrams got all the socialist support she needed—with none of the stigma of being supported by Marxists.

Sophisticated DSAers know their endorsement won’t hurt Sanders and may even help him slightly. They can use the Sanders movement to build their numbers, and if by some miracle he wins the Democratic primary, the DSA can take the credit.

If he loses—which he almost certainly will—the DSA will be spared a divisive battle over endorsing the eventual nominee—who won’t want their endorsement. The Democratic leadership wants to distance themselves from DSAers Alexandria Ocasio-Cortez and Rashida Tlaib, not give them center stage. The DSA may then get behind whoever is up against Trump, without embarrassing either themselves or the Democratic nominee.

“In 2020, DSA’s friends and allies—in immigrant communities and communities of color, in groups seeking to combat the climate crisis and save the planet, in organizations of working people seeking a radically more equitable economy and society—will be fighting for their lives to replace Trump with a Democrat. It won’t be a battle between socialism and barbarism, but it will be a battle against barbarism, and the Atlanta statement offers a way that DSA can join it.”

Sounds like a win-win all around—for everybody, that is, except the U.S. voter.